It is fair to say that since we first crossed paths about a mile from this very venue in a room that barely held a hundred or so people, the career of Geordie boy Sam Fender has only gone one way. Admittedly, that gig in The Church was packed to the rafters and, while it may not have been his finest hour due to various technical difficulties, the chances of seeing the songwriter playing a venue that size again in the future will be few and far between.

Winding the clock forward to this cold November evening and the queue round the twelve thousand seat First Direct Arena is absolutely ridiculous as fans make their way into the latest date on his UK arena tour. “Shows like this are what dreams are made of,” admits the singer as he looks out over a completely sold-out Arena, and with plenty of family and friends in the crowd to cheer him on, Fender will leave the stage eighty minutes later taking with him a night he won’t forget in a hurry.

Putting on a huge rock show, any reservations that Fender doesn’t have what it takes to pull off an arena gig are quickly kicked to touch and with the entire arena absolutely bouncing, anyone who wasn’t a fan of the lad before tonight was surely converted watching this spectacle. Kicking off with “Will We Talk?,” “Getting Started” and “Dead Boys,” the arena front-to-back sang back every word at Fender while some of the grittier tracks like the raucous “Howdon Aldi Death Queue” had moshpits breaking out around the dancefloor.

Midway through the set, the crowd breaks out into a chant of “Shearer! Shearer!,” in reference to Newcastle United and England football legend Alan Shearer and, as Fender grabs a phone to capture the moment, he jokes “I’ll send that to him later, he’ll be buzzing!” Selling out arenas, having the personal phone numbers of football legends, Sam Fender has clearly hit the big time but with that popularity comes the downside. Having been labelled by some as “just a British copy of Bruce Springsteen,” Fender takes it all in his stride as he jokes “well, I don’t really help myself with these next two songs…” before ripping through a superb solo version of “Dancing In The Dark” before being joined by support act Gang of Youths for “I’m on Fire.” 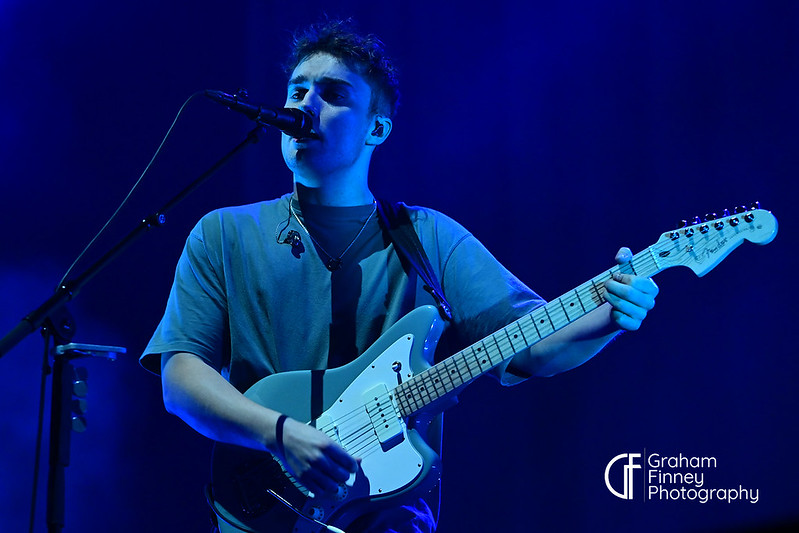 This incredible night comes to a close with heartfelt renditions of “Saturday” and “Hypersonic Missiles” as Sam Fender cements his position as one of the greats of modern British music. Then again the twelve thousand fans shoehorned into this arena didn’t need any proof as they filed out into the cold November night having witnessed Fender take another step towards true greatness.