It’s been a busy time for South Wales death metal wrecking machine Venom Prison. Having finished work on their eagerly-awaited third studio album, inked a new deal with Century Media, and laid waste to Bloodstock Open Air, the band is readying to release their massive new album in the first half of 2022.

Recently, we spoke with guitarist Ash Gray about the future, working with Scott Atkins, and what we can expect from that all-important third album.

Thanks for your time, Ash. How is life treating you?

Ash Gray: “Good thanks. We’ve been busy, really, really busy. We just literally spent all of our time just writing the new record. We started recording in December, finished in June so we were in the studio for the last six months almost.”

What was that like? Were you able to work together as a band during lockdown?

“Well, to start with, at the start of it, both myself and Ben work in care so we were a bit skeptical and tried to be sensible. I’ve been very, very cautious, but we’re fortunate enough to both have home studios. We just bounced audio back to each other and going over each other’s stuff. It was a long, gruelling process as it always is, but no stress.”

Even though the industry has been fucked for the last 18 months, bands have said they appreciated the time to be able to breathe…

“Yeah, the reality is that, yeah, it’s fucked but somehow I’ve sat there writing the best stuff I’ve ever written and I don’t feel any pressure or time restraints. Normally it would be tour, tour, tour, home for two months, write much as you can, tour, tour, tour and you just get yourselves in a rut over it.”

Do you think that will now change the way bands like Venom Prison work?

“Yeah. I don’t know. I don’t really know to be honest. Like, it seems like a lot of bands have been keeping busy and a lot of records came out last year. They have been keeping busy and writing and stuff but I don’t know how it will change? For me, it was weird because that’s what myself and Ben have kind of always done anyway. I live in Wales. He lives in Bristol. It’s only a 40-minute drive, not even far, but that’s what we’ve always done, sending audio files back and forth. So, as soon as everything was locked down and stuff we just went back to the drawing board.”

Have you been given a chance to explore different ideas or try different things without the pressure of a record label saying you’ve got to go on tour?

“Me and Ben just got really nerdy with a lot of instruments and gear and equipment and started wanting to just try something new. It was weird because every member was wanting to do something additional to what they already do. Yeah, it has definitely gone in an interesting direction. There’s a lot more thought-through structures with our producer Scott Atkins, which was great. He’s kicked my ass for six months. Well, when I say mine, I mean all of our asses. When I listen to the stuff he sent over, the sound is tight, it’s amazing. He is what this band needed for so long. He’s really managed to capitalize on what we do.

“I’ve listened to the unmixed version but this could be mastered, I wouldn’t know. It’s the most time I’ve ever spent in the studio. I know we got tours in October and stuff but, for me, really wrapping up this album and the artwork and the videos and all the visual stuff, I’m not really in a rush to just force ourselves to go back and stuff because those songs aren’t as simple on stage to play. To me it’s like pump the brakes for a second, recalibrate and figure out what we’ve done then start planning for how we move forward.”

What can you tell us about the new songs? You said that they’re very, very different to the old material?

“It’s still Venom Prison but it’s more… it’s more calculated. It’s more, you know, mature. Scott used that word a lot with us. I really understand where he comes from when he says that this is the most mature thing you’ve written. He’d tell us to go and listen to your album before and listen to the new stuff. He’s not talking about production. He’s talking about the actual songs.

“For me, it was like, let’s leave some of the gimmicks behind. I’m not interested in how many notes I can play in one minute. He was very involved with the demo stage as well. We’d send a lot of demos to him and he would break them down. So without giving too much away. He’s matured us through and through. It was like having someone to almost hold our hands through the whole thing.”

Is there anything that you’ve learned from the whole experience that has surprised you about yourself?

“Yeah, loads, absolutely loads. He’s made me really play the guitar. I really did have a few moments in the studio where I questioned why I’m doing this bit five times? He would just make me listen for that moment. He’d make me listen to the precision and listen to the tension on the strings, listen to the way you’re hitting the strings. All of a sudden, I sat down to learn our set and realized that this is actually way easier. The techniques and also just teaching me to have patience, he’s moved us into a new direction.

“I think he’s just made it more refined. There have always been bits where it’s like we know can get through it, but it could be a lot tighter. Scott wouldn’t allow that. He’s really drilled a lot of quality into all of us. I’m only speaking about myself, he was very direct with each and every one of us. It wasn’t like he was speaking to us collectively. He was very direct with, you know, when Joe was doing the drums, he’d be telling him to keep hitting it hard and do it again to the point where Joe would be dripping with sweat. You’d reach a point where you did it perfectly then Scott would tell you he wanted you to do it perfectly twice. It was stuff that I would probably have brushed under the carpet before.”

Do you think part of that was also that pressure of that touring, writing, recording cycle?

“It’s not even that. I know everyone talks about the reissue but this is album three and everyone says that album three is the big one. I just wanted to make sure that everything was right. Even things like doing videos and photoshoots. This needs to look the best it could ever look. Let’s go away to produce something. It’s a very big step for us.”

With the new deal, the pressure Scott put on you, and this being the third album, do you feel like you’ve taken things to the next level?

“I feel a lot different. I feel very at peace with it. Like, there’s not a single song today that I wouldn’t rate higher than any before, even if they’ve all got their own traits and personalities and their unique ways. Some people may moan because it is different, or maybe they’ll like it. I’m happy with it. I think that’s another thing with Scott and lockdown; learning to be happy with what we’ve done. At the end of the day, whether it becomes a successful band to what people deem as successful, the biggest band in the world, whatever, but as long as we’re happy with what we’re producing, that’s what matters.”

You mentioned your new label, Century Media. How did that come about? I mean, were you looking for a new deal?

“We met Mike Gitter in LA when he came to one of the shows during our tour in America. He was such a nice guy and, ever since, he’s just been in contact all the time. We’ve been in contact with everything. He’s very caring about everything. So we just knew it was coming. I remember speaking to management and said to them that if this deal comes in, we need to have Mike on board. You just have to look at the bands he’s broken through. It’s a no-brainer.

“We had label offers from different labels and they were all great but there was just something about Mike. I feel like he understands us as people, as well as a band. It’s very easy to look at Venom Prison and say that it’s just a bunch of metalheads in a death metal band, but when you really dig deep into it, it’s the complete opposite.”

Perfect. That’s a great way to finish up. Looking forward to hearing the new material and thanks for your time.

“No problem. Thanks for chatting with us.” 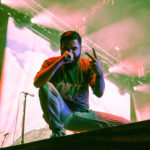 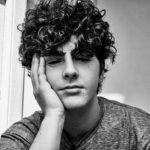