Growing up we all dreamt of being rockstars and living life on the road travelling the world. As a touring videographer/photographer for US rockers Shinedown, Sanjay Parikh, has got the next best thing. Touring all over the world, documenting his favourite band on the road and in the studio, Sanjay is living a life most music photographers would dream of. As Shinedown returned to the road, we spoke to Sanjay to find out more about his life, get some advice from him for all you aspiring rock photographers, and find out if there are ever moments when he just wants to rock out with his favourite band like the rest of us.

Sanjay Parikh: “Life is good! It’s a great feeling to be back on the road and see my Shinedown family again. Right now I’m in Davenport, Iowa getting ready for Shinedown’s first show since the long break.”

So, for our readers, could you tell us who you are and what you’re all about?

“My name is Sanjay Parikh, I’m 33 years old and I’ve been a touring photographer/videographer for about five years. I’ve been with my family in Shinedown for the past three years. I live in Arizona with my wife and two kids.”

Let’s talk about your life as Shinedown photographer/videographer, how did that come about?

“I started off playing guitar in bands and touring the US. After playing our set, I would put down my guitar and pick up my camera to shoot the other bands. Being a known musician in Arizona allowed me to network with people in other bands, local radio stations, etc. I would do everything I could to get photo passes to shoot big shows in town, anything to get my foot in the door. I would get the occasional “no” but the “yeses” allowed me to really push myself to get better at my craft, improve my content, and develop my own style over time.

“After a few years of shooting for Arizona’s rock station, 98KUPD and touring with some bands, I found myself with the amazing guys in Asking Alexandria. For me, I don’t think it would have turned out the way that it did without having had experience as a musician myself. The industry can be tough, but you have to learn to network and swim with the sharks. I can’t say enough about how fortunate I am to be a part of the Shinedown family.”

How did you get that gig and what advice would you give someone looking into following that path?

“The first time I met Shinedown was actually back in 2015 when I covered one of their shows for 98KUPD. I would see them a few more times at different shows and festivals. Fast forward a few years, and we end up being on the same European summer festivals together. We would all hang out and talk in catering or meet up after shows. The guys in Shinedown had seen the work that I was doing for Asking Alexandria at the time and appreciated it. A month later when I was off tour, Zach called and let me know they needed a fill-in for media on the US tour they were currently on. I packed up my gear, hopped on a flight and have been with Shinedown ever since. That was in 2018.

“My advice for aspiring photographers/videographers is don’t give up, you will get told “no” a million times before one “yes.” But the one “yes” makes it all worth it. Make sure you are well versed with your gear, develop your own style, and stand out from the rest. The music industry is a small world, you have to network. It’s also essential to stay on top of your game, always pushing yourself to be the best at your craft. More importantly, be humble and kind.” 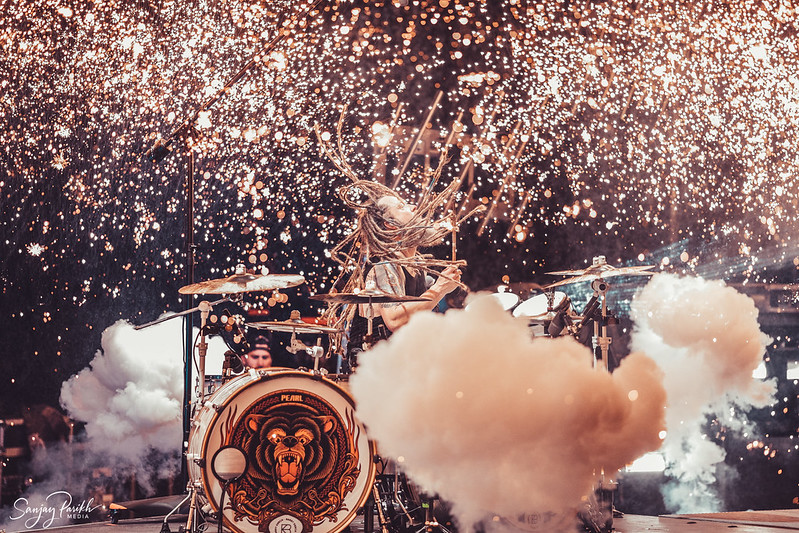 When you’re out on the road with Shinedown, could you talk us through your daily routine?

“On show days, I wake up, grab a coffee, go to the venue, set up my gear, and start going through the photo and video footage from the night before to edit/cut together and put out that day. Beyond that, I’m constantly taking backstage photo and video content throughout the entire day. Having an adequate amount of B-roll is important; you never know what material might be useable. During meet and greets, I’ll typically shoot some photos and do some video content of the guys interacting with the fans. Whether we are commuting from place to place on the bus, or in my hotel room for the night, you’ll typically find me editing. I’m a little OCD when it comes to my content.”

You’re not just a touring photographer for Shinedown though, you’ve also documented their studio sessions. Bands have their own opinions of being in the studio, what are your thoughts on it? Enjoy being locked up in a studio for days on end?

“That is very true, there are a lot of artists that don’t like working in the studio, I happened to be one of the odd ones that doesn’t mind it. Maybe it’s because I’m a musician and have recorded before, but I really enjoy watching/being part of the creative process. From a photographer/videographer aspect, I enjoy finding those intriguing moments that would typically be “off-camera,” because that’s when the artist really shows who they are, what fan wouldn’t want to see that captured?”

As a fan of Shinedown, is there a particular song in their set where you just want to throw down the gear and rock out in the pit?

“In all honesty, my new favourite song by Shinedown is a track from their upcoming album. Aside from that song, if there is one song that I would love to put down my gear and just watch, it’s “Fly From the Inside.” It will forever be one of my most favourite Shinedown tracks. I have always been so impressed with Shinedown’s writing. They have a way of relating to their audience through their lyrics and have done so consistently with multi-generational appeal. I guess that’s why they have the most mainstream rock hits. It’s truly an honour to work with these guys.”

One of the things you do is take local photographers under your wing. What is the one thing you hope a photographer takes away from spending a day or two shadowing you?

“I think they see how much work really goes into doing what I do. There can be a lot of misconceptions about being a touring photographer/videographer. It’s not just the time during the actual shooting of the show, it’s shooting behind the scenes, shooting B-roll, and shooting the crowd. Not to mention, after the show is done, I’m not done…everything has to be creatively cut together, effects added, etc. It’s also important to consistently come up with new ideas to keep viewers interested. Just when I’m finished editing the previous night’s show, I have the next show to start working on. I love what I do, and I hope that shows with the content I put out. Beyond that, I hope that I set an example for other photographers to be professional, humble, and kind to everyone (especially the fans).”

Other than Shinedown, what else do you have going on in your life?

“In my personal life, I spend time being a super dad for my two children. I have a 15-year-old and a 1 1/2-year-old so there is never a dull moment on the age spectrum.”

Obviously live music has been put on hold, how has that affected your plans and what have you done to keep busy?

“When COVID hit, it was a blessing in disguise. My daughter was born in October of 2019 so I was able to spend the entire first year of her life watching her grow, not missing a moment. In 2020 I went to Malibu to record studio footage of Smith & Myers recording their new album. Although I wasn’t busy touring, I was at home creating 17 studio music videos for Smith & Myers. Along with that, I was in the process of editing and completing the Shinedown “Live In London” video. Most recently, I toured with Smith & Myers. Currently, I’m back on tour with Shinedown for their first run since the shutdown.”

Modern media is constantly changing, how important is it in your job to keep up with it and what makes up your standard touring kit bag?

“The most difficult piece of my job is keeping up with the ever-changing amount of gear that comes out. Every month there seems to be a new camera, a new lens, or a new gadget that I need to get to keep ahead of the game. Having the right equipment and knowing how to use it is key. An expensive camera is only as good as the person who holds it. Similarly, a good editing program is worthless if you don’t know how to use it. For video, I use Sony A7Sii, BMPCC 4K. For photos, I use Canon Mark IV. I use Canon, Sigma, and Sony lenses.”

“What I’m about to tell you is probably not the answer you were expecting but it is without a doubt the most memorable and meaningful moment I’ve had with Shinedown. My dad passed away a couple of years ago when I was on tour in Europe. The guys were incredibly compassionate during that difficult time in my life. During a show in Paris not long after, Brent pulled me up on stage and dedicated and sang the song Simple Man as a tribute to my dad. I’m sure there is still a video of it online somewhere. I was completely taken back, not what I was expecting…you can see this in the video. The guys in Shinedown never cease to show how much they care; they are family to me.”

Thanks for your time Sanjay, over to you to wrap this up…

“Thank you so much for taking the time to reach out to me and taking an interest in what I do. I really hope this helps anyone that might be interested in concert photo/video. For those reading this, if you ever see me around at a show come on over and say “hi.”” 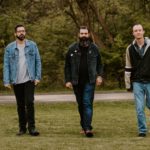 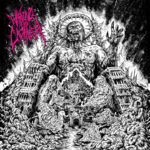