Perhaps it’s some Jungian genetic memory of bardic traditions, but a narrative-driven musical venture is possibly one of the most exciting prospects I can imagine. As such, the second record from solo project Untamed Land (Like Creatures Seeking Their Own Forms, available on Napalm Records on 8 October) has me foaming at the mouth, for a number of reasons…

One, the concept is built around Cormac McCarthy’s ultra-violent anti-Western, Blood Meridian – itself a retelling of the autobiography of Civil War commander Samuel Chamberlain. If ever there was a novel of human depravity and hopelessness to inspire extreme metal, this is it. The western wilderness theme builds on the band’s first release, 2018’s Between The Winds.

Two, the music itself is more like a score than a regular album: expect introspective instrumental interludes, dissonant emotional fluctuations and a sprinkling of predominantly old West themes, often performed on instruments you don’t often encounter in the blackened end of the metal spectrum: organs, electronics and strings all combine in an eclectic, psychedelic blend of tones and registers.

Three, the accompanying video for the first single, “Clothed In Smoke,” is an appropriately hypnotic accompaniment that matches the visual to the auditory gorgeously. Sweeping landscapes, unsettling filters, textural treatments and an overwhelming sense of loneliness leave a viewer isolated and bereft, but eagerly anticipating fresh sensual assaults.

If Untamed Land can maintain this momentum throughout the upcoming album, listeners across the black/doom/atmospheric metal spectrum are in for something special.

1. Once Upon a Time in the Kenoma
2. A Nameless Shape
3. Clothed in Smoke
4. The Heavenly Coil
5. Achamōth 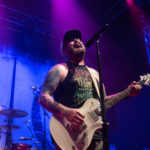 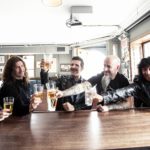