You only have to follow any of Black Stone Cherry’s social media accounts to see how happy they are to be arriving back in the UK for this long-awaited run of headline shows. Speaking to V13 before the tour started, BSC guitarist Ben Wells joked “I told my wife last night that I was going to miss her but I cannot wait to get out of here and go on this tour. We just missed people over there and playing those shows.”

Even though there is still a queue of people snaking around the Academy trying to get in, there is still a healthy contingent of fans packed into the room as support act the Kris Barras Band kick off this night of hard rock. With no disrespect meant to TKBB, given this majority of this audience had been starved of live music, anybody could have gone on that stage and got this crowd bouncing.

That being said, Black Stone Cherry fans know quality hard rock when they see it so a support band of a below-average standard is always a no-no. Thankfully, the Devon rockers know how to get a crowd pumped. Kicking off their nine-song set with “Dead Horses” before pounding into the night’s anthem “Rock ’n’ Roll Running Through My Veins”, Kris Barras and his bandmates had sweat dripping off the walls and ears ringing before the end of the second song. Keeping the energy levels switched to max, the band rocked through “Who Needs Enemies” and a cover of “Going Down” by The Alabama State Troopers before bringing this warm-up to a conclusion with a rousing “Hail Mary”. 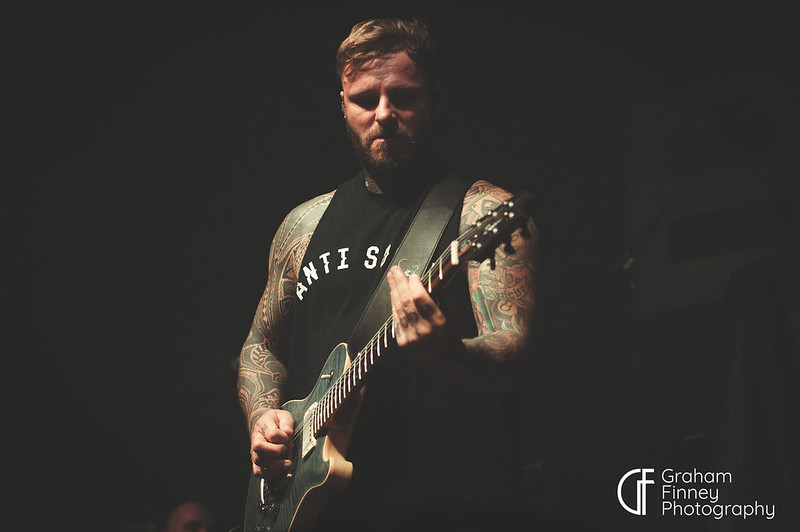 Kentucky rockers Black Stone Cherry are the kind of band that live music needs right now. With rock anthems by The Darkness, Iron Maiden and Queen whipping the crowd up even further, the band raced onto the stage and straight into opener “Me and Mary Jane”. Like a huge release, watching guitarist Ben Wells fling himself around the stage, headbanging and high-kicking, life was all good again.

Having played down the road at the much bigger First Direct Arena a few years ago, it’s nice to see the Kentucky band back in venues like this where their huge rock bangers like “Burnin’”, “Yeah Man” and “Ringin’ In My Head” had this Yorkshire crowd absolutely bouncing. Speaking of bouncing, while it’s hard to keep your eyes off Wells as he flings himself around the stage, it’s equally as difficult to ignore drummer Jon Fred Young who, behind his mammoth drum kit, is a whir of arms, legs and hair for the duration of the set.

“Things My Father Said” brought the tempo down a bit but it was soon back to that familiar gasoline-fuelled Kentucky rock in the form of a thunderous “Blame It On The Boom Boom” with “White Trash Millionaire” keeping things rattling along nicely into an epic finale in the form of “Peace Is Free”. Ending this night all hugs and smiles, Black Stone Cherry promised to return as soon as possible and, as this sweat-drenched, rocked-out crowd filled out into the streets, there wasn’t one person praying that it won’t be another two years until the quartet are back in Yorkshire.