If you’ve been following along for the last couple of years, you may remember a fun little interview we did with The Winnie Blues. Great news…they’re back again! This time, with tons of new music and exciting updates for fans.

Alice Beatty and Cameron Potts are originally from Australia but found their voices in Nashville’s Americana scene. Their hauntingly beautiful vocal harmonies and touching lyrics call out to fans of bands like The Civil Wars to introduce a new duo that’s bound to capture your attention. Alice and Cameron filled us in on what they’ve been up to since we last spoke and what new developments are in the works for The Winnie Blues.

So great to be chatting with you guys again! Tell me what the past year has been like for you as musicians…. how have you pivoted in the wake of the pandemic?

Cameron Potts: “Well, I don’t know how far we have pivoted. it feels like we have done a full 360, and ended up back where we were meant to be. But a lot of our experience in trying to release our debut album in a pandemic has been trying to think up creative ways to reach people, connect with and build our audience. The landscape of the music industry is almost unrecognizable to what it was five to ten years ago, and I think that has only been exacerbated by the pandemic, both in good ways and in not-so good ways. For one, it seems with lockdowns and the closing of so many loved live music venues, the only way to get our music out there is through social media platforms. So I suppose we have invested a lot of our time in creating (what we think to be) pretty well-crafted music videos.”

Alice Beatty: “It kind of feels like a game of tiggy. Do Americans know what tiggy is? (laughs) Maybe not! I think it’s called ‘tag’ here. Anyway, it feels like we are constantly trying to chase or keep up with whatever new way the industry is re-creating itself. So far, I think we have done ok!”

You have a new album, Half Wide Awake, but Dreaming. What was the inspiration behind this album?

Beatty: “This is essentially a collection of stories and songs that we have written since becoming a duo, with various themes. A lot of the songs we wanted to create a shared essence of middle America mixed with outback and urban Australia. Some of the narratives are about heartbreak, some are about self-love, some of being apart from the ones you love and an uprising of yourself in a world that wants to hold you back.”

Potts: “Production-wise, our ultimate goal was to have the song ‘Hopelessly Devoted to You’ by Sandra Dee in the film Grease be the guiding light and main influence. ‘70’s Americana, country, glamour.”

Tell us about creating the songs…. what has the process been like? What are the stories behind the songs? How did the ideas for these songs come to fruition?

Potts: “Ultimately so much of ourselves and our personal experience is in these songs, whether it be first hand or through observation. ‘Coming Home to You’ was written about one week before recording it. This song came from a place of empowerment. It’s our anthem for equality.”

Beatty: “Yeah ‘Coming Home to You’ really was born out of our frustration where we would meet with male producers, as the music industry is pretty male-saturated, and we would both observe that anytime I directed a question to one of these guys, they would direct their answer back to Cam and leave me out of the conversation. This song is about fighting the good fight.”

What’s your favourite song on the album and why?

Beatty: “One of my favourites is ‘Lonely Love.’ I love how this happened in the studio, it became bigger than either of us could have imagined.”

Potts: “Mine is ‘Old Dog.’ This is a song that feels particularly relevant with how gentrified Nashville is becoming, and captures the sadness and reality of seeing communities bowled over by property developers and consumerism.”

Beatty: “‘Love I just hate to see you cry, I know it comes from anger deep inside. But they’ll take your tears and tell you that you’re weak, so gather up that courage now and speak.’ Women are so often labelled as ‘emotional’ or ‘hysterical’ anytime we are expressing anger or frustration. This line resonates with me down to my core. Also, ‘I love your thoughts when you’ve had too much to drink’ (laughs) (also accurate way down in my core).”

Potts: “‘There must something on the breeze, that carries us away to nowhere. There must be some kind of disease, that crawls its way into our bloodstream’ from our song ‘Failed Me Now.’ We wrote this song about government and how conspiracy theories grow and fester in the masses. This song isn’t on this upcoming album but may make an appearance at some point!”

How does this album capture where you are at in your artistry during this season?

Potts: “Well this is our first album. We see this as just the start of what we have to offer! We are just eager to create more. We have also made our first vinyl, which we are damn proud of.”

You have a tour coming up later this year. What can you tell us about that? Do you have a certain city/venue you are most excited to hit?

Beatty: “Well this is technically our first tour. We have played select cities several times like New York City, but this will be the first time we are hitting the road together and covering some ground. We’ll be in Georgia, South Carolina, Florida, Alabama, Iowa, Chicago, Missouri, etc. We have some festivals coming up that we can’t announce yet, but we are super stoked. You can check out tour dates and ticket links on our official website.”

What can fans expect next from The Winnie Blues?

Potts: “Really good times (laughs). Come to our shows and see. If you can’t make it to the show, the vinyl is equally a good time.” 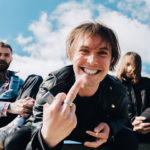 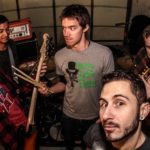