All we can say is poor you if it’s taken you this long to discover Denver, Colorado’s own Poor Me! The punk poppers have arrived with their brand new single “Lovestruck,” three minutes of melodic, emotional, classic punk goodness that delivers on all fronts. The band has been plugging away for nearly a decade now, and has worked their collective asses off to establish a solid, and loyal fanbase.

“Lovestruck” is from their brand new album Stalemate that will be coming in September. The song is actually a tribute of sorts to the band’s gone, but certainly not forgotten friend, Johnny Bender. Johnny’s death sent shockwaves through the punk community when he committed suicide back in the summer of 2018. Johnny was the bassist of the beloved underground pop-punk band The Gamits who first formed in Denver in the mid-1990s.

Discussing their relationship with Johnny and what “Lovestruck” signifies, the band stated, “Johnny Bender will never hear this song, and that distresses me every time I think about ‘Lovestruck.’ He passed in July 2018, and the conflict that surrounded him in his final months punctuated an inversely colored lifetime of celebrating a music culture he had a stake in building. The band met Johnny in 2011 during a local billing in Denver, and though the details are fuzzy now, Johnny left with a copy of our demo that would become Readymade. We didn’t make much of the interaction at the time, but Johnny reached out a short time later, saying something to the effect of ‘get this professionally tracked, there’s something unpolished here,’ and he asked we keep in touch.

“Even the slightest encouragement can swell into something palpable, resulting in formative moments that were never intended. I think that is an amazing possibility for our relationships, something Johnny enacted as much as he preached it. We stayed in touch, and I was regularly inspired by Johnny’s ambition, effort, and vision to uplift artists through the For the Love of Punk brand. But Johnny was also conflicted toward the end of his life, creating a striking contrast in how his friends sometimes remember him. There was momentum in everything he did.

“Lovestruck is about that momentum. It is about where our choices weigh heaviest, and how others come to remember the journey that leaves a lasting imprint. Johnny knew this, and whenever he considered this truth, he weighed in with a ton of heart. Thanks for listening.”

If you haven’t guessed by now, Poor Me is a conglomeration of humble young men dedicated to the passion and craft of punk rock. Even though they still all have day jobs, their true adoration is for punk rock, to which they give it their all, each day in the studio and every night on stage. While some may view music as a meal ticket to fame and fortune, Poor Me views it as a forum for friendship and connection. In their decade together, they have toured the west coast too many times to count, and along the way have opened for The Flatliners and Alkaline Trio. In the process, they’ve also released two full-lengths, with Stalemate to make it three. As they begin to enter a new chapter as a band, Poor Me will continue to silence any doubters, all while keeping a big smile on their faces. 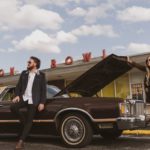