Colorado Americana artist Sunny Gable released Contagious on March 20th. The album is a continuation of Gable’s quarantine recording sessions, created entirely in her basement studio. “It is a mixture of new songs, written since my last release, and a few songs I’ve been playing with the band for a few years,” says Gable. The project was a team effort for the Colorado native as she collaborated with a few other musicians, including a drummer all the way in Connecticut. “It’s been a real learning experience piecing this album together with other musicians at a safe distance,” says Gable. “But a deeply satisfying one.”

The title track “Contagious” is a statement of what the album is themed around. The connection and energy we give and receive to the universe and the great beyond are elements that heavily influenced Gable’s creative process. Listeners will find notes on her connection to the moon’s phases, finding a deeper connection through love, missing the connection between friends during this isolating time, and much more. Unlike her previous releases, Contagious pushed Gable to step away from her typical deep folksy, singer-songwriter style.

Gable says while focused energy played a large part in the creation of the album, her intuition was just as important for the end product. The album’s topics were ideas that Gable heavily thinks about and experiences for herself. “This album is a culmination of many musical ideas melding into one group of songs that may surprise our fans,” says Gable. On top of the album release, her single “Until We Meet Again” also debuted with a music video just prior to the album.

Sunny Gable is an Americana artist at the core, having known from the first time she touched an instrument that music was her calling. Gable grew up playing violin (among other instruments) and singing, and started reading music at the soft age of 4. Cultivating her musical gift through lessons, open mics, and playing regularly in bands, Gable continued to find her voice and purpose in the form of music as she got older. Her first break came when she joined UCD Denver’s Paramicci, a gypsy swing subgroup of the school’s famed Claim Jumpers. Since then, Gable has fronted her own gypsy swing project A la Cote from 2013 to 2015, performed as part of The Great Contention for a few years on fiddle/mandolin/vocals, and finally crafted her own band Sunny & The Whiskey Machine. Sunny & The Whiskey Machine released their first EP New American Dream in August of 2017, as well as the EP Live at the Tucson Folk Festival in October, 2019. Audience of One served as a seamless transition for Sunny to step into a solo spotlight of her own, leading her to the most recent release Little Things in 2020, also written in the midst of the COVID-19 pandemic. 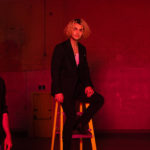 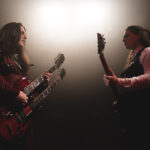