The Lernaean Hydra known as Necrophobic recently released their eleventh album, Dawn of the Damned (give or take a few imports, exports, and bootlegs) via Century Media Records, and Sebastian Ramstedt recently spoke to us about dark rock, ‘80s guitar, metal, and life in in the early 2000s. With an AC/DC type approach, you get what you pay for when you purchase anything from Necrophobic, a blackened death classical goth cocktail, shaken not stirred, and enjoyed in the dark caverns of your mind. No shocking changes only subliminal nuances that gear outside the norm. I’ve never heard a bad Necrophobic album and I’ve been chasing this band since their demo days. Their newest release, Dawn of the Damned, is to be hailed by those still above ground and the ones laying six feed deep breathless, and vacant of emotions. In other words, it rules.

After Kung foo fighting the internet I caught up with Sebastian and here’s what the king of strings had to say about this latest opus of blasphemy. “The intro ‘Aphelion’ came to me one morning and I wrote it at the beginning of the writing process, but it didn’t have everything I was looking for. I talked to Fredrik Folkare from Unleashed, the producer, and explained I wanted it to be very triumphant sounding in life as we know it, but entering the next change of life, death. Orchestral, I wanted this to be something different and lonely.”

Stepping back for a moment you have to think, where did all this stuff come from? In the ‘90s I listened to a lot of Fields Of The Nephilim, Sisters of Mercy, and Depeche Mode. Some of the darkest songs are in the same circle as black metal with the same instruments but with a different atmosphere. I haven’t listened to gothic rock in ages because it doesn’t fit my life anymore but I still like it. It’s the same as death or black metal. They use the same minor chord progression but have a very different chord progression than pop music.

Pop music? Well that leads us to guitar heroes. “In the ‘80s I hated all hair metal except for early Motley Crue and WASP. You would watch ‘80s MTV and there would be Cinderella but you were waiting for Sepultura and you hated it. But I don’t have my guard up like that anymore and those bands have very good guitar players. It takes a lot to write a great love song or an ‘80s metal song. The greatest guitar players at that time for me were Eddie Van Halen, George Lynch, Warren D Martini, and so on. But, Jake E. Lee was my favourite and his work on Bark At The Moon and The Ultimate Sin is the ultimate lead guitar work ever.

I think Jake E. Lee is much better than Randy Rhoads and you can’t say that out loud but I believe that. Other guitarists like George Lynch, who wasn’t always heavy had more fun in major keys, and they used the guitars in an unlimited way which I admire. They didn’t have to do fast songs or slow songs, evil songs, or happy songs they could do whatever they liked. If you only use one mode like the gothic mode it’s very narrow what you can do with your music.”

And what about that ‘80s vibe? “The song ‘The Shadows’ was created with only one drum beat. It was something I wanted to try. Can I use the heavy metal build-up and still be catchy? Can I use one drum beat with a catchy good chorus and make this a black metal song? It’s not ‘Love Machine’ but inspired from a Europe song ‘Scream Of Anger.’ It’s the same drum pattern. I wanted to do an ‘80s metal song with a black metal feel. I was terrified to play the demo for the other guys because I thought they would laugh at me but it turned out well.”

Cutting to the chase with a throwback thrash back “Devils Spawn Attack” has a Destruction rip-off vocal and it’s well explained. “Well, you know it’s Schmier who sings. The record label wanted one more song and I was like, no, there will be no more songs. They said it’s in the contract, write another song. I don’t like being told what to do so I was listening to Kreator Pleasure To Kill, Destruction’s Infernal Overkill, and Sodom. I wrote it in two hours and went to bed. I woke up the next morning and listened to it and thought this is very good but it needs Schmier on vocals. Our manager is friends with Schmier and he said no problem I can get him to do it and I told him there has to be a minimum of three high-pitched screams. Schmier said ok, and did it and it was as simple as that.” 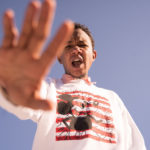 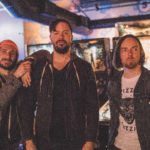