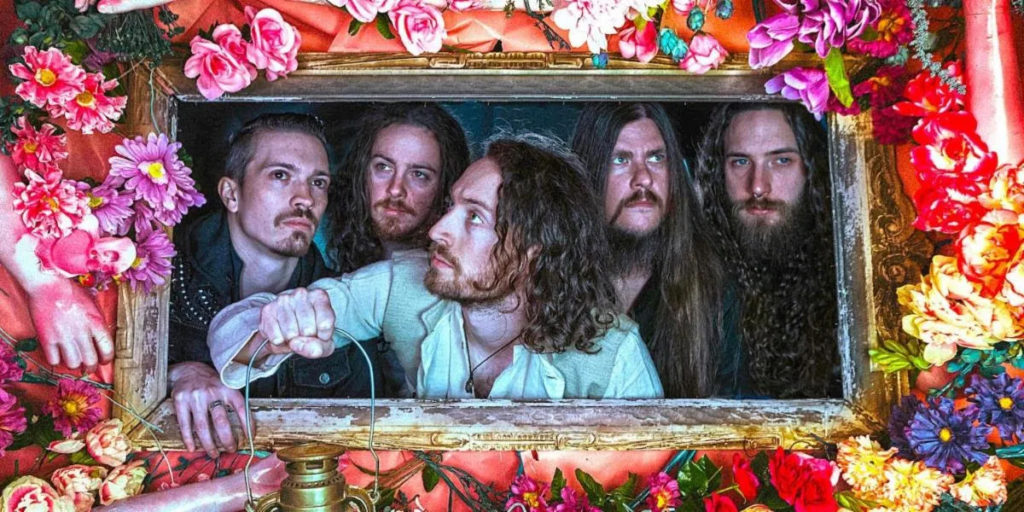 Hailing from Boston, Massachusetts, symphonic/progressive metal band, Wilderun cites everyone from Winger to Skinny Puppy as influences for their dramatic sound. The group recently reissued their epic Veil of Imagination disc through Century Media, so we sat down with vocalist/guitarist, Evan Anderson, to talk about the reissue, Iron Maiden covers and much more. Veil of Imagination is out now and you can pick up your copy here.

Hi, thanks for your time, how is life for Wilderun these days?

Evan Anderson: “I’d say it’s been a mixed bag. On the one hand, it’s been a great year for us, with the signing to Century Media and the re-release, which has all gone really well. On the other hand, all our live shows have obviously been canceled, including our very first planned trip to Europe, so that’s been quite the bummer. However, every band is experiencing this right now, so we can’t really uniquely complain. We’re just trying to be productive however we can while we wait for things to reopen.”

Looking down your Spotify playlist, there is a huge range of bands from Myrkur to Winger to Skinny Puppy. How much do you think this influences the depth and range of your music?

“I think it’s been influencing us more and more as time has gone on. At first, we were a bit worried about incorporating too many varied sounds and styles into our music, just because we wanted to establish a solid identity, and because we didn’t exactly confidently know how to blend in those different things. But we’ve learned a lot as we’ve progressed, so we’re starting to get a little more courage to diversify our sound. I think that was more apparent on “Veil” than previous records, and I imagine we’ll continue that even more so on the next album.”

In terms of describing your sound, the words progressive, symphonic and epic are regularly used. In terms of creating your songs, is there a master plan when creating an album as to the emotion and feeling you want to invoke when fans listen to the album?

“I don’t think there’s a master plan. I just sort of write whatever comes out of me, and if I like it enough, I’ll save it for the record, and use it as one of many puzzle pieces to create a whole album. I think the overall sound sort of shapes itself as time goes on, not only with the songwriting but with arrangements and orchestrations as well. I have an idea of the sound in my mind while I’m writing, but it always evolves and takes on a new life as it comes together. I find this process to be more fun and creative than contriving the whole album from the beginning. This way I get to be surprised by ideas that come forth, and the music sort of creates its own emotional world that’s hard to describe with words.”

How does the writing process work and how does it feel to hear the final end product?

“So far, I have been the core songwriter of Wilderun, and the rest of the guys work to develop and cultivate the broader soundscape of the band. I will make the “skeleton” of the songs – the basic structure, chords, melodies, etc – and demo everything out in a fairly rough manner. Usually just a normal ‘band’ demo with some basic keyboards. Then Dan, Wayne, and I will have long, detailed discussions about how to want to arrange and orchestrate everything. This usually goes on for a few months, with lots and lots of edits and reworking. Joe and Jon then get a hold of the material and start to embellish my basic ideas into something much more interesting on their respective instruments. So it’s sort of a brick-by-brick process. It’s always been very relieving and exciting to hear the final product, although sometimes it’s bizarre since we’ve been sitting on the material for so long, our ears can begin to lose objectivity.”

Are you surprised at the reaction to the band and what do you hope that people get out of listening to your work?

“I wouldn’t say I’m surprised, but I am very grateful and happy the response has been so positive, in general. I don’t think there’s anything really specific I hope people get out of it, as long as it means something positive to them. Music affects everyone in such different and subjective ways, all I can hope is that people derive their own personal meaning from it, regardless of what we get from it as a band.”

Let’s talk about the Iron Maiden cover – you chose an epic and highly-regarded track from their catalogue. What was it about that track and have you stuck close to the original or added your own twist to it?

“I sorta figured everything we’ve done with Wilderun is quite ‘epic’ and ‘dramatic,’ so it made sense to pick one of the Maiden tracks that exemplifies those qualities the best. We definitely added our own twist to it. With covers, I always like to try to take the original compositions and arrange it in a way that sounds like Wilderun. It’s a fun challenge, and it’s an interesting marrying of worlds that I think results in a new sound that wouldn’t exist otherwise. I never really understood when bands cover songs exactly like the original unless maybe it’s in a live context, where it’s more about everyone just having fun in the moment. There are a few classic Maiden homages in there, but overall we definitely gave it the full Wilderun treatment.”

The album is reissued through Century Media, how did that deal come about and what are your future plans?

“We were contacted by their A&R rep Mike Gitter at the beginning of this year. Actually, he emailed us literally while we were onboard the 70000 Tons of Metal cruise, where none of us had access to our phones or email, so we were greeted with his email basically as soon as we hit the shore. CM seemed genuinely interested and excited about our music, so it made a lot of sense to us to work with them, and it’s been great so far. We don’t have concrete future plans just yet, but we hope the first ‘real’ (non-rereleased) album on the label will come out before too long. It’ll be great to have label backing and press for the entirety of that album cycle, and subsequent albums after.”

In terms of your next album, is there a wealth of material waiting to go for your next album and, on that note, where do you see the direction of the music heading?

“We are currently deep in the process of the next album. It’s hard to say exactly how it’s going to turn out. There will certainly be a lot of the same elements we’ve had on all our records so far: fairly long songs, lots of dynamics between heavy and light, orchestrations, etc. I don’t think we’ll ever Not have those elements; at least it’s hard to see it feeling like Wilderun if we didn’t. But, besides that, we’re hoping to experiment with new textures and atmospheres we haven’t dabbled in yet. Not exactly sure what that means yet, but I’m excited to really get into it in the coming months.”

What about visually? Do you have a vision for the whole package in terms of visually/musically?

“Honestly, I have no idea [laughs]. The ideas for the next album are currently pretty amorphous.”

Finally, good luck with everything, what can we expect from Wilderun going into 2021?

“Thank you! Considering the state of the world, it’s hard to say how everything will look in 2021. But, if everything opens up and is back to (somewhat) normal, we will absolutely be hitting the road as much as we can, as well as progressing more on this new album. We plan to be in Europe in the Fall of 2021, so fingers crossed that those plans remain!”