05. In Motive – “Subtle Mistakes (Acoustic)”
– In Motive have released an acoustic version of track “Subtle Mistakes” with an accompanying music video. The band feature members and ex-members of Crown The Empire and Born Of Osiris

FFO: Crown The Empire, Born of Osiris, City In The Sea

08. Dream Nails – “Jillian”
– London punks Dream Nails will be releasing their much-anticipated self-titled debut album on August 28 and have revealed their latest single from it, “Jillian”.

09. Gazpacho – “FIreworker”
– Atmospheric and affective, art rock band Gazpacho are back with their new album Fireworker due for release on September 18 and you can hear the album’s title track.

FFO: Gouge Away, Fury, The Fight 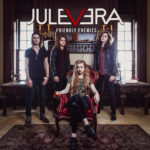