We’d like to introduce you to the Soul Ambassador himself… Quinn DeVeaux. The blues-country singer recently released his Book of Soul (QDV Records), an energetic, foot-stomping ride through all of his admiration of contemporary and classic soul music. The album is uplifting in nature, featuring his unique blue beat soul sound, a new take on the genre that still makes sure to pay homage to the greats of blues, R&B, and soul music of the past. You could say that DeVeaux is looking back while thinking forward, creating a sound familiar to lovers of these genres, but packed within it is his modern twist on the classic sounds of the past.

Recorded in Nashville at The Bomb Shelter studio, Book of Soul is a joyful-sounding album with a strong focus on modern storytelling. You’ll hear songs that will remind you of modern trendsetting artists such as Nathaniel Rateliff, Anderson Paak and Leon Bridges, while also gaining a greater appreciation of some of the all-time greats like Al Green and Bill Withers.

DeVeaux first got interested in music at a young age when he was growing up in Gary, Indiana, surrounded by the legend and the mystique of living in the birthplace of The Jackson 5. His grandmother was a former jazz singer who helped in getting young Quinn involved in the church choir, while also exposing him to the greats of vintage soul, blues, and country.

When he hit his teenage years, he decided to pack his bags for San Francisco where he began developing his music career before forming the well-regarded local group Blue Roots. From there, Quinn would go on to form Quinn DeVeaux & The Blue Beat Review, a band that released a string of well-received albums and became known for its rowdy live show. Now, as a solo artist, Quinn is ready to further define himself as one of the nation’s best soul singers and performers.

To honour the recent release of Book of Soul and to get to know this talented man a little more, DeVeaux has today contributed a special guest blog where he presents some of his thoughtful musings on the idea of what it means to be an American and how it plays into the current conversations and protests happening about racism in society.

Quinn DeVeaux on What is American and His “True American Guitar”:

– My favourite guitar these days is my Guild DC-5 “True American” acoustic. This is the guitar I write on and I generally take with me when I’m traveling. When I first sat down with it in a guitar shop in South Nashville, I loved how it felt and I had to act less excited than I was to talk them down a bit on the price. I also noticed the stamp “True American” on the headstock and thought, “Well, this’ll get me that much closer.” 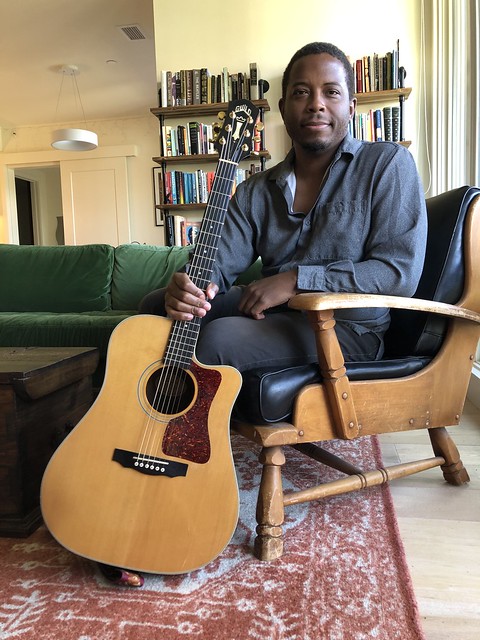 The idea of what an American is has always fascinated me. Though not explicit law, there is an idea out there that some folks are real Americans and others less so. I have an early memory of watching a commercial and realizing the black version of a Cabbage Patch Kid was the alternative, placed behind and to the side of the blonde white doll. We who are further from the American standard know the differences well and live in awareness of them daily. Susceptibility to violence, financial and educational isolation are on the list and that list marches on. The way police are able to treat black men and women is a brutal manifestation of a nationwide perception that some folks are less American than others. Less deserving of civil rights. Less deserving of second chances. And tragically less deserving of life itself.

Not everyone believes that. But enough people have internalized this basic idea that some lives are worth more than others that it affects how black people and people of colour are treated every day of our lives. I am no scholar or even particularly well-read, but it strikes me that something very deep in the psyche of this nation will have to change for everyone in it to be fully American in the minds of all that live here. When I play that guitar I rarely think of the stamp. But, strangely, I guess it means more to me than I want it to. It has been heartening to see conversations about race happening all over the country. Only through confronting the unspoken ideas can we begin to change them.

Some of this I try to address in my music, but it can be hard to write about something so close to home. It takes me longer to write very personal songs because I have to filter through more complex emotions than I do if I’m writing from even slightly outside of myself where it can feel simple. I recently finished a song called “Holiday” that took me a few years to complete, and now that I mention it, I’m not sure it’s done. “Holiday” is about the heartache I feel every time I hear another tragic story of death. I hope that, through concerted and unyielding action, we can change the story in the years to come.