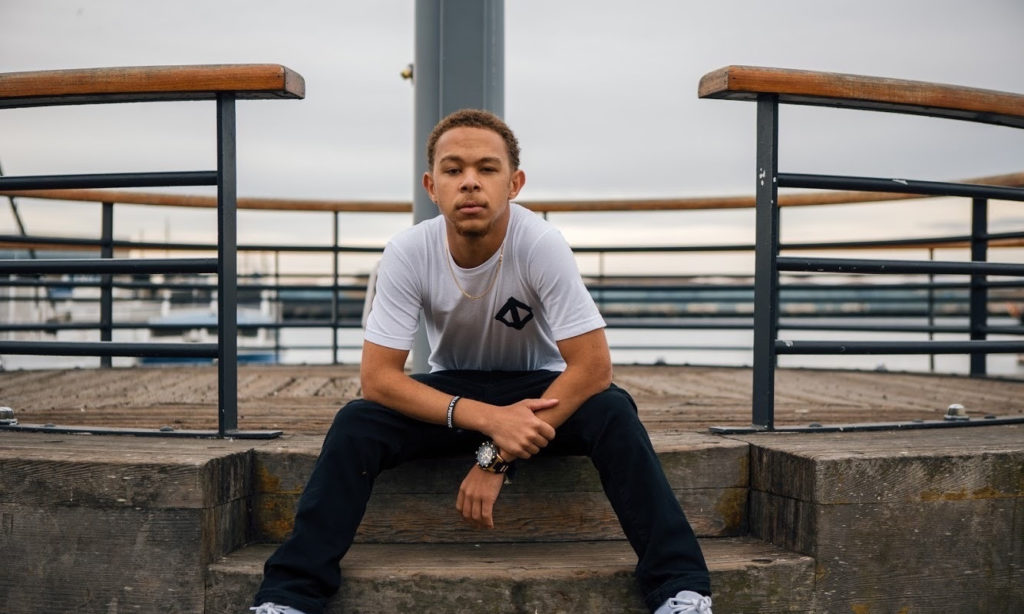 Young, talented, and wise well beyond his years, Bay Area hip-hop artist Jwalt has just released his triumphant debut record, Yours Truly, an eleven-track compilation of some of the best beats and rhymes he’s written in his young life. Still only eighteen years of age, Jwalt came flying out of the gate in 2017 when he gained nationwide recognition for his participation in Sway’s Universe Domsday Cypher, a celebration of hip-hop which brings together some of the best young artists, all spearheaded by the legendary journalist and DJ Sway Calloway. Sway has been a significant mentor to Jwalt since they first met, with Sway taking him under his wing and helping to executive produce Yours Truly.

Even at such a young age, Jwalt is already capable of standing toe to toe with the best of the genre, thanks to his lyrical prowess and storytelling skills. Each track on Yours Truly engages with the listener over serious topics like mental health, family, relationships, and emerging within the difficult confines of the entertainment industry. You immediately get a sense of what kind of person Jwalt is and you quickly realize that not only is he a bonafide talent, but he’s also a very intelligent, thoughtful artist. Jwalt has already shared the stage and gained the respect of many well-known rappers such as Quincey White, ANoyd, FVRTHR, and Pro Era’s Nyck Caution.

With such a bright young talent, it was a no-brainer to hook up with Jwalt and ask him a few questions about his artistry, his debut record Yours Truly, and how he first gained Sway’s recognition.

You must be absolutely thrilled that Yours Truly has now been released. How would you describe the album to a new listener of yours?

Jwalt: “Yes, I am extremely thrilled that Yours Truly is out! I have been working on this project for over two years, so the fact that it’s finally out is surreal and relieving. To a new listener, I would describe this album as true, vulnerable, dope hip-hop from the perspective of a young man. If you enjoy storytelling, songs with a message, and lyricism, you will like this album.”

It’s quite an accomplishment to already have a debut album out at only the age of 18. How recently were these songs written? Do the origins of some of these rhymes or verses go back to your earlier teenage years?

“A lot of the songs on the project are two to three years old, and the most recent song I wrote is ‘Elevate,’ so the songs on here definitely go back to some of my earlier teenage years.”

“Before becoming a rapper, I started off writing and performing poetry when I was eight years old. I fell in love with hip-hop music and rap culture at eleven. My freshman year of high school was when I started to take it more seriously and realized that I had a powerful message.”

Being a lot older than you, my first exposure to hip hop was perhaps the golden age of rap, which was the early to mid-1990s featuring Dr. Dre, Snoop Dogg, Tupac, Ice Cube, etc… I’m curious as to what artists you were first exposed to when you first started listening to hip-hop…

To help you record and produce Yours Truly you hooked up with DJ Touré. How were you first introduced to Touré and how did he become involved in the album?

“I was first introduced to Touré by a family friend. He invited me to his studio about four years ago for a meeting. Touré asked me to play him my music. He loved the fact that I was a young cat who loved hip-hop and was about bars and lyricism. I also found out that he went to school with my mom back in the day, so that was a dope connection as well.

A couple months later, I went back to his studio and we created our first song called ‘The KID.’ We had great chemistry and worked well together. After that session, he said he wanted to produce a project for me which became my debut album Yours Truly. It was definitely a dope experience being able to work with a veteran like him. It was so surreal because I grew up listening to Hieroglyphics, so being able to create an album with a member in their studio was really dope.”

Yours Truly was also executive produced by Sway, whom I’m familiar with from being a frequent SiriusXM listener. Tell us about how you first gained the attention of Sway and how he became involved in this album.

“Sway has known me since birth and it’s been a blessing to have him in my corner. When it comes to my music, he’s always given me honest feedback and holds me to high standards which has helped me become the MC I am today. In the early stages of Yours Truly, he came to a few studio sessions and listened to the project. He loved it so much that he offered to executive produce it.”

You’re already a very accomplished lyricist. Is there a way or a method you typically write lyrics? Or do rhymes just come to you and then you scribble them down?

“I freestyle a lot. Either out loud or in my head, and that’s how I start to write my songs. Ideas are always floating around in my head as well, so whenever I think of a bar, a chorus, or lyrics I always just write it down, and come back to it when I am about to write a song.”

Logic and G-Eazy are among the well-established hip-hop artists who have offered you mentoring and support. What’s the best advice you’ve taken thus far from people who have been in the game now for a while and know what they’re talking about?

“Some of the best advice I got from Logic and G is to always stay true to myself and always be willing to learn.”

Who are some other really talented, young rappers who we should start paying attention to?

“There’s a lot of talented young rappers coming up right now. You should check out Ajai Kasim, BigTreeSteve, and Babygirlnai who are all from the Bay Area, as well as John Tr3 Pritchett and Niko Brim from the East Coast. All of them are different and make dope music.”

Congratulations on your album and all you’ve accomplished thus far. I think you definitely have a bright future ahead of you. I know there’s uncertainty right now with regards to touring, but what do you have planned for the rest of this year?

“Thank you so much! I truly appreciate it. I was really looking forward to touring and playing festivals this year, but I have a few visuals I’m working on. I’ll also be releasing a book entitled, “Ahmad’s Song” which is actually available for pre-order now. Plus, I’ll be heading off to New York City this fall as a student at NYU’s Clive Davis Institute of Recorded Music.”