Featuring members/ex-members of some of the UK’s finest tech/death metal bands like Sylosis, Abhorrent Decimation, Martyr Defiled and Heart of a Coward, Viscera dropped their crushing debut album, Obsidian (read our review here), through Unique Leader on March 6th. With extensive plans to promote the album on hold due to lockdown, we spoke to the band to find out how they came together, the effects lockdown will have on the metal scene across the UK, and more.

Thanks for your time. How are things going during lockdown? How are you and the band keeping busy?

“Things are moving along, everyone’s trying to keep as busy as possible and we’re starting to write new music in this down time, before tours start booking again. It’s a good excuse to get caught up with loved ones and friends as there’s so many ways to do so on devices now.”

You just dropped your new album recently, how have plans been affected by the lockdown?

“They’ve been affected massively – we had a tour cancelled after the release of our album which slowed momentum and left us with a new record we couldn’t play to people… but a ton of bands are in the same position, so it’s about making the best plans for the latter stages of the year and hoping that all this madness ends as soon as possible!”

The band came together in 2019. You’ve all been in other projects, how did you all end up working together?

“I was speaking to Ross about the project for a little while throughout 2018; we had a couple of other initial members that had to bow out because of other commitments, but it worked out well as everyone’s where they need to be! I’ve known Al (drums) since 2008 from his days in Martyr Defiled and was always blown away by his drumming…the timing worked out well on that front, as he brought in Adam and then Archer came on board. The album came together very quickly as we were all pretty motivated by that point.”

What was the initial reason/goal that brought you all together?

“We definitely had a specific vision with Viscera, which was to try and bridge the gap between the Melodic/Mainstream choruses and the Deathcore/Death Metal heaviness. Its a very hard balance to get right without sounding like either a tonne of other bands, or like a mess… but I think we managed to hone it pretty well for a first release. We’ve established a bit of a sound of our own from the first record, which is hard to do nowadays.”

So, onto the album then. Are you happy with the end result? What did you want to achieve with it?

“Given that we wrote the record in 9 months, we’re super happy with it. Like all albums, you look back and think ‘I could have done that bit better’, or ‘maybe we should have shortened that riff’. But as far as achievements, we just wanted to make sure we were making a definitive statement with our first record. We will take more time on the next one and will be paying particular attention to dynamics and the production.”

How does the writing process work as I guess you are all based in different locations?

“We tend to write riffs/patterns at home, put them all in a shared drive and share the DAW sessions…Adam and Ross meet up a lot and they tend to go to Archer’s to track demos. Al has a kit at home and can record to decent quality so the writing process is very efficient. I tend to start with choruses on songs first and build from there. We find the rest of the arrangements come together much faster once you have a hook cemented into the song.”

What about plans to promote the record – is there anything in the pipeline?

“We had plans to tour the UK, Europe, the US etc in 2020 but it looks like this cycle will last into 2021. We will most likely add a few singles along the way to scratch the itch.”

The music scene in the UK is healthy but how do you think the lockdown will affect the metal scene, not just in the UK but globally, given that it is a scene that, for the most part, is built around independent live venues, bands touring, indie labels?

“It’s definitely negatively impacting every musician and industry colleague that I have spoken to recently. You would think that streaming numbers would increase due to everyone being at home but that doesn’t seem to be the case either! There’s most likely not going to be a live music industry again until the final quarter of the year. Even then I don’t see it fully recovering until this sort of time next year, once vaccinations have all been put in place. In the meantime, the industry can at least prepare for a very well organised 2021.”

Given your experiences in other bands who have reached a successful level, what lessons have you learned?

“Juggling ‘real life’ with ‘band life’ can be the hardest test when you’re trying to establish yourself. Some of the best bands around have had to disband for these reasons. Also, the relationship and communication between a band and their team has never been as important as it is now. But I guess nowadays the main points to take forward would be to have consistent output of content – be it musical, aesthetic, videos, live sessions; whatever the medium, bands have to stay active in as many ways as possible. It’s no longer a case of just selling records or achieving streaming numbers.”

On that note, what are the pros and cons of being in a band with musicians who are experienced at this game?

“Experienced musicians often tend to get used to a certain level of professionalism. They also tend to be a little more jaded and a little less trusting! Be it larger stages, better sound, better catering, etc., starting a new band can be a crash back to earth. But it’s also great to have that target set again to take a new band to that level.”

Finally, thanks for your time and good luck with the album, just to finish do you have any message for fans and family out there?

“Thank you to everyone who supports this band and we’re SO sorry that we didn’t get to hit all the countries we were supposed to on album release. Hang in there and keep supporting your favourite artists in any way you can, be it streaming their album, buying their merch or even just sending them a nice message. We are super grateful for all the support we have had so far since the band started… it’s been amazing.” 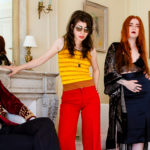 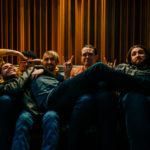