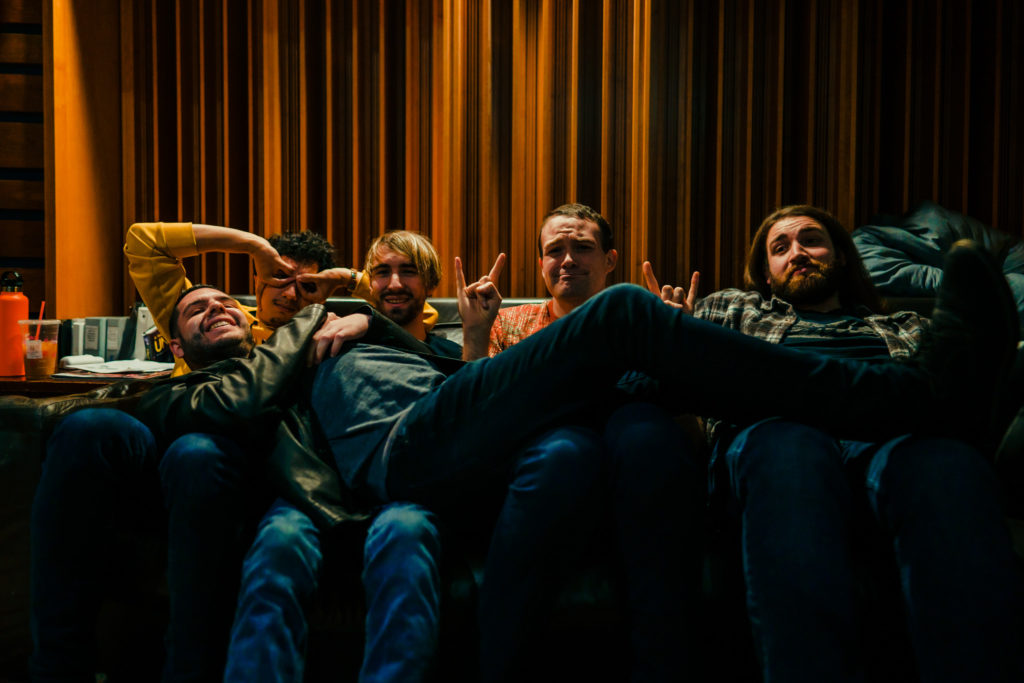 Loyalty To Me is asking for a chance to obtain your allegiance with the help of their debut EP Clash // Coexist. The five-song collection was just released last month and introduces the masses to this band’s hook-laden, infectious brand of alternative rock. (Stylistically, you could place the New Jersey quintet somewhere along the lines of more straight-up, 2000s emo and present-day emo-pop.)

It’s only been about eighteen months since their formation, but the combination of vocalist Will Patrick Jackson, guitarist and singer Devin McGuire, guitarist James Conrad, bassist Ryan Keller, and drummer Kevin Castro have bound together to form quite the formidable outfit, bringing you the best in hook-heavy, relatable and addictive alt-rock.

Led by the sharp and clever lyrical approach of Jackson, Clash // Coexist is perfect fodder for those looking to hear something smart and intricate, but still fast-paced and upbeat. Thus far, Loyalty To Me has been proud to open for genre mainstays such as Oh, Weatherly, Cute Is What We Aim For, and Trashboat. With the buzz building and a premiere of the brand new video for “The Rest,” we caught up with the band for a special track-by-track rundown of each song found on Clash // Coexist – read on for all the fun, behind-the-scenes details!

James Conrad: “This is the first song we recorded with (producer) Brett Romnes and I think it was immediately obvious why he was the right choice for us. I think this functioned as a perfect proof of concept for what we wanted in our recordings: thick, punchy guitars, and layered vocals while still staying true to the punky energy that we were aiming for while writing and performing it. The guitar lines in this track are a personal triumph for me too. I’ve always appreciated players who can write intricate lines that add to the momentum of a song without distracting from the vocals and I think I’ve done that here pretty successfully.”

Ryan Keller: “This was one of the first Loyalty To Me songs I ever heard when joining the band. At that time I was taking over bass from Vince (the previous bass player) and he had all these sick bass riffs he had to teach me cause I had no idea how to play them. It has been interesting to see the journey of this song because I remember sitting in the studio feeling like the song was missing something and we laid down a track and I played a wrong note but it fit. That’s when it clicked it was like a eureka moment for me with that song. That actually became the first bass note of the song, it gave it this kind of apocalyptic feel.

As for how it developed, I felt like this song became a personal anthem to us as a band fighting against the odds. ‘No love for the fucked up new kids’ just felt like we were all in this together, whether or not people liked our music and we were going to keep playing because we loved it. I feel like everyone who has been made fun of or told what they wanna do is unrealistic or even just put down in some way knows how that feels. We just want to let those people know that we’ve been there too, and they aren’t alone. We’re all gonna keep fighting, for ourselves and for each other, and we’re gonna get where we want to be.”

Will Patrick Jackson: “‘Magenta’ is the closest song to my heart. This is the first time I’ve written about my bisexuality. On a broader scale, it’s about being cut down by others for not fitting into someone’s preconceived idea of who you are. A few key elements about this song really make it stand out, James’ vocals in verse two, for starters. It’s the first time you hear his voice on the EP and it adds an element of darkness.

It also has this noisy, hazy bridge that I do falsetto vocals on. It starts with one layer of vocals, and then stacks on a few more layers of me singing in different registers, which builds tension before the final chorus. It’s a part that I wrote at the studio. It was going to be an instrumental bridge, but I had this weird idea, and I was so confident about it! I said ‘hey, I have this idea, and if I tell you about it ahead of time it’ll sound weird, but I know it’s gonna work, so I just wanna record it and then play it for y’all.’

Lo and behold, it fit right, and ended up being one of my favourite moments. The real kicker for this song is the outro though. It switches time signatures and goes into this aggressive finish with roaring guitars and harsher vocals. It’s cool, because when the song shifts gears, the lyrics do, too. The whole outro is its own little vignette within the larger story of the song. It gets more specific and darker. It’s definitely the edgy song of the bunch.”

Kevin Castro: “This is definitely my favourite song of the bunch. Early on while the song was still in its formative stages I could tell that it was going to turn into a behemoth of a song. Low-key verses keep the instruments weaving in and out of the listener’s attention while expansive and spacey choruses work as a great counterpart response. We prioritized the overarching build-up and tension in the song over any particularly ‘cool’ parts. In fact, the original ending had a sharper, heavier, sound that would remind you more of a breakdown. We opted for a simpler and more subtle four-on-the-floor rhythm that would give a more satisfying release than originally written.

The band has become musically comfortable with each other (alarmingly) quickly. There’s a lot of trust we place in each other’s creative visions. Every show, practice, or discussion we have a band opens us up to each other’s musical and personal nuances. We’ve found ways to play around each other’s sonic presence in the mix and blend it all together into a unified and coherent wave of sounds. This song is a testament to how in sync we’ve become with each other. Plenty of our other songs have little licks that demand the listener’s attention at certain points, but ‘Layover’ presented an interesting opportunity for us to showcase that we don’t only make punchy hard-hitting tunes. We know when less is more, but we also know when more is more.”

Devin McGuire: “The writing process for ‘Rewrites’ started about a year before tracking it. Will and I made plans to meet at a karaoke bar because I was having a lousy day. We ended up having a long venting session in my car once he got there. At one point, we had a little jam since my acoustic guitar was the back seat. It was while we were jamming that I wrote the intro riff to ‘Rewrites.’ By the time we were done, it was already last call, and ironically, we never got around to ordering drinks.

This was one of the songs that changed the most once bringing it to Brett. We added tons of synth layers that give the song a power-pop feel, and completely overhauled the guitar solo and outro sections. Brett was actually the one who encouraged us to make ‘Rewrites’ our lead single, and since it draws from lyrical motifs introduced in previous tracks, it was a no-brainer closing the record with it.”