Speaking of his vision for the video, Jaime Bennington said: “This music video is about my spiritual connection to the other side and my literal experiences with the elusive and, at times, incomprehensible presence of my father after death. “Soul Song” is about the many ways in which we come to enlightenment, into knowledge, and the many ways we fall away from it. This is my personal experience with that.”

The album is the fulfillment of a planned Grey Daze reunion that Chester announced prior to his untimely passing, and marks the origin story of one of modern rock’s most recognisable voices. An eight-part video series titled “Making Amends” takes a behind-the-scenes look into the making of the album.

Check out part one of the series below, while the full eight-part series can be viewed here: 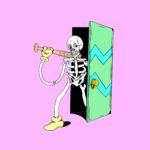