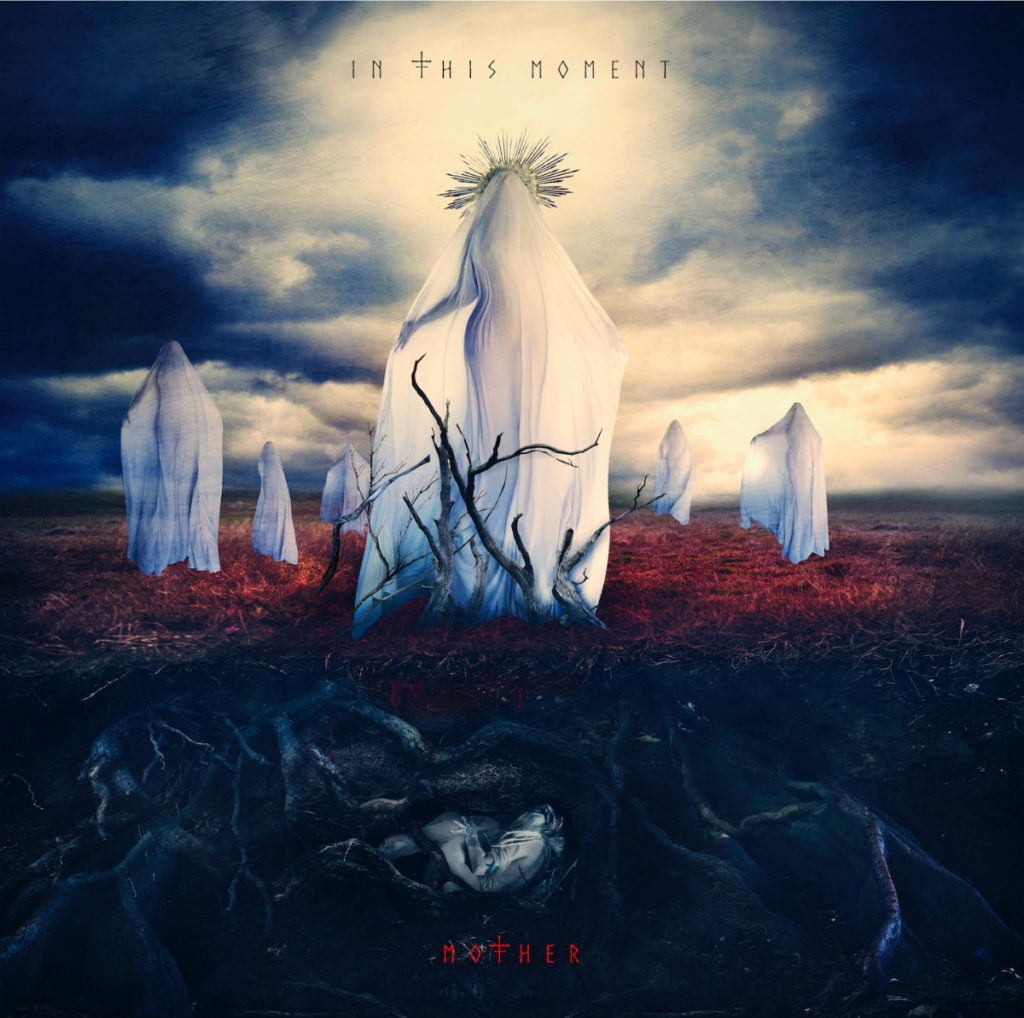 In This Moment – ‘Mother’ [Album Review]

This century has witnessed an explosion of musical variety and diversity like none other, especially in the world of metal. We’ve shifted from the classic metal of Black Sabbath, Metallica, and others of similar ilk, to metal infused with electronica, banjos (check out No One Gets Out Alive for some banjo slam metal… yes, that’s a thing), and all sorts. One of the bands who came out of the ‘00s to push the boundaries of what metal could be was In This Moment, with their dark electronic influences dripping into the 2012 record, Blood. (An album which would make them one of the most popular groups of that year.) Since that outing, they’ve become more creative and innovative, with 2017’s Ritual taking a more thematic approach, not to mention offering a smorgasbord of styles including art-pop and country. Now, in 2020, they’re about to release their seventh full-length, Mother.

The diversity mentioned at the start of this article only seems amplified in Mother. A more layered and deeper record is experienced throughout, with each track bringing that dark and enveloping edge for which In This Moment have become known. “The In-Between” – one of the most striking tracks on Mother – seems to accumulate all the influences of their sound over the years while giving homage to the elements of Blood’s “Whore” and “Blood”: Maria Brink’s intimate vocals and distorted explosions of sound as the crunch of guitars and electronica combine to create striking melodies to great effect. In a slightly softer sense, the same electro-metal journey is traversed in tracks such as “Holy Man,” with simple yet effective electronic drum beats carrying the main instrumental charge and Brink’s strikingly beautiful vocals carrying a saintly tone throughout (as it does during many moments of the album – perpetuating the theme that “all cultures, religions, and belief systems share one commonality. Life springs forth from a mother”).

In This Moment have realized the power of this combination and utilized it well in Mother. “Legacy” follows a similar influence – deep bass beats in the background and atmospheric electronics over Brink’s emotional vocals build the listener up with enough energy and wonder for the crescendo. This delicate flirtation between atmospherics, electronics and sheer power is a unique aspect of In This Moment’s sound which they have managed to concentrate brilliantly over the years, and Mother is not bereft of these moments throughout. The title track, “Mother,” presents us with Brink’s best vocal performance to date, and from this moment on the album takes a significantly darker and heavier turn. We also see this demonstrated in “God Is She,” which nods towards the trademark qualities of In This Moment’s sound and amplifies them tenfold in a more mature and elaborate manner instead of simply aggressive riffs and electronica. It reminds of their third record, A Star-Crossed Wasteland, where distorted riffs blend charismatically with Brink’s wispy and occasionally ethereal vocals.

The main gripe of the record, however, is that there are a couple of tracks that seem like easy filler, or just a little out of place. For example, while “Lay Me Down” brings Brink’s vocals and male throat singing together to create an initial dichotomous intrigue, it leads into an uplifting and rather traditional hard rock track. It certainly acts as a respectful nod to their roots and is a clear marker of their maturation over the years; however, one can’t help but feel a lack of In This Moment’s more eccentric, extreme elements. As such, it falls flat in comparison to the shock and awe presented throughout most of the album. It’s quite a contrast to come of the other tracks on Mother – such as the outro “Into Dust” – which offers a very intimate look into Maria Brink’s creative talent and personality, whereas “Lay Me Down” isn’t particularly innovative or original. These moments somewhat dampen the impact of some truly outstanding songs which really highlight In This Moment’s maturation.

There is plenty of innovation throughout Mother, though. Maria Brink’s unique vocals are highlighted massively in the cover of “We Will Rock You,” which features Halestorm’s Lzzy Hale and The Pretty Reckless’ Taylor Momsen. It’s a powerful homage, and one of their fiercest tracks as backing choirs send chills to the spine, but the contrast between the three vocalists and the backing choir is striking and gives merit to the claim of some that Brink is the Lady Gaga of metal in terms of diversity and uniqueness. The other collaboration on the record – “Hunting Grounds” featuring Joe Cotela (Ded) – brings a slightly darker, traditional metal edge to In This Moment’s repertoire which, while not being particularly innovative, is a solid and enjoyable song. Regarding the innovation itself, however, Mother does just that in terms of both instrumentals and thematic offerings. The constant nods to religious undertones and the spiritual lore they have created revolving around the ‘mother’ character is indeed innovative and an interesting take on ideological pluralism which is also a signifier of In This Moment’s massive maturation from a shock-type metal band to an outfit with a message.

Overall, Mother is an impressive effort from In This Moment. They’ve matured tremendously throughout their career, with a contemporary focus on hard rock infusing with dub-like electronica to make an enticing, vibrant record with its own lore. The occasionally jarring directions of some of the tracks distract from the shock and awe which made In This Moment as special as they are today, however, the overall takings from the album are positive. Irrespective of these alternate directions, the constant wants for experimentation and pushing boundaries – something we have seen with every In This Moment release thus far – must be commended and respected. With some incredible tracks and rather striking new elements to their sound, it will be interesting to see where In This Moment go from here. One thing is for certain, they deserve their standing as one of the most prolific contemporary metal/hard rock bands at this present time.