Ever had your ribs broken, or at the very least, had the wind knocked out of you completely? Either way, you know what it’s like to be brought to your knees as you gasp desperately for each precious breath. Well, that’s a pretty darn accurate description of my initial Powerslave experience. However, in the spirit of full disclosure, I will confess openly that I only ever have been a casual consumer of Iron Maiden content. As a result, although the celebrated, platinum-selling slab was released 35 years ago this week (September 3, 1984), I purchased the record for the first time just recently — at age 56. So, there ya go. In the words of Jesus, “The truth will make you free.”

Straight out of the gate, I could feel my heartbeat racing as my rib cage seemingly was being crushed under the weight of the ferocious riffage of the iconic tracks, “Aces High” and “2 Minutes to Midnight” — certainly nothing new for fervent Maiden followers, but for a newbie, I became an immediate slave to the record’s power.

Powerslave was the band’s fifth studio set. Their signature sound and reputation for creating metallic-fueled epics had been cemented fully for the last three records. And except for the addition of master drummer, Nicko McBrain, the lineup also had been established for some time. So, what made Powerslave a smidge sexier and noticeably punchier and crisper-sounding than previous Maiden efforts? That likely can be attributed to two factors — a bigger recording budget and the now-dialed-in finesse of the band’s famed longtime producer, Martin Birch (Deep Purple, Rainbow, Whitesnake, Black Sabbath).

20 million views and counting, this is the video for “Aces High.”

Powerslave proudly shows today’s youngins that screamier vocals, faster riffs, slower chugs, lower tuning and fewer baths doesn’t make your brand bolder or your music meatier. It’s only the size of your balls that matters. And in that regard, Iron Maiden’s balls prove massive and mighty throughout Powerslave. The dizzying dual guitar precision of Dave Murray and Adrian Smith particularly on “Flash of the Blade” and “Back in the Village” is simply superb, while Steve Harris’ brutal trademark bass lines are punishing from start to finish. And it’s all glossed to perfection by Bruce Dickinson’s operatic, powerhouse vocals.

Simply put, the eight-song collection offers ALL “thriller” and NO “filler.” Even the instrumental track, “Losfer Words (Big ‘Orra)” has been confirmed to cause sterility in laboratory mice. And the galloping title track is guaranteed to blister your bare backside with the intensity of an unsympathetic schoolmarm. A re-imagined telling of the Samuel Taylor Coleridge poem, the 13-plus-minute opus, “The Rime of the Ancient Mariner,” closes out the record with extraordinary Marillion-flavor grandeur.

A lifelong Maiden fan commented to me recently that what made Powerslave such an incredible record is that it “refused to compromise.” He further attributed much of the record’s allure to the band’s “unique sense of musical integrity.” Another ardent Maiden admirer revealed to me how Powerslave, “Still gives me chills” — passionate and powerful personal testimonials for a record that first dropped three and a half decades ago. And I would embrace those sentiments, fully.

The Iron Maiden mench posing for a Powerslave publicity photo back in ‘84: 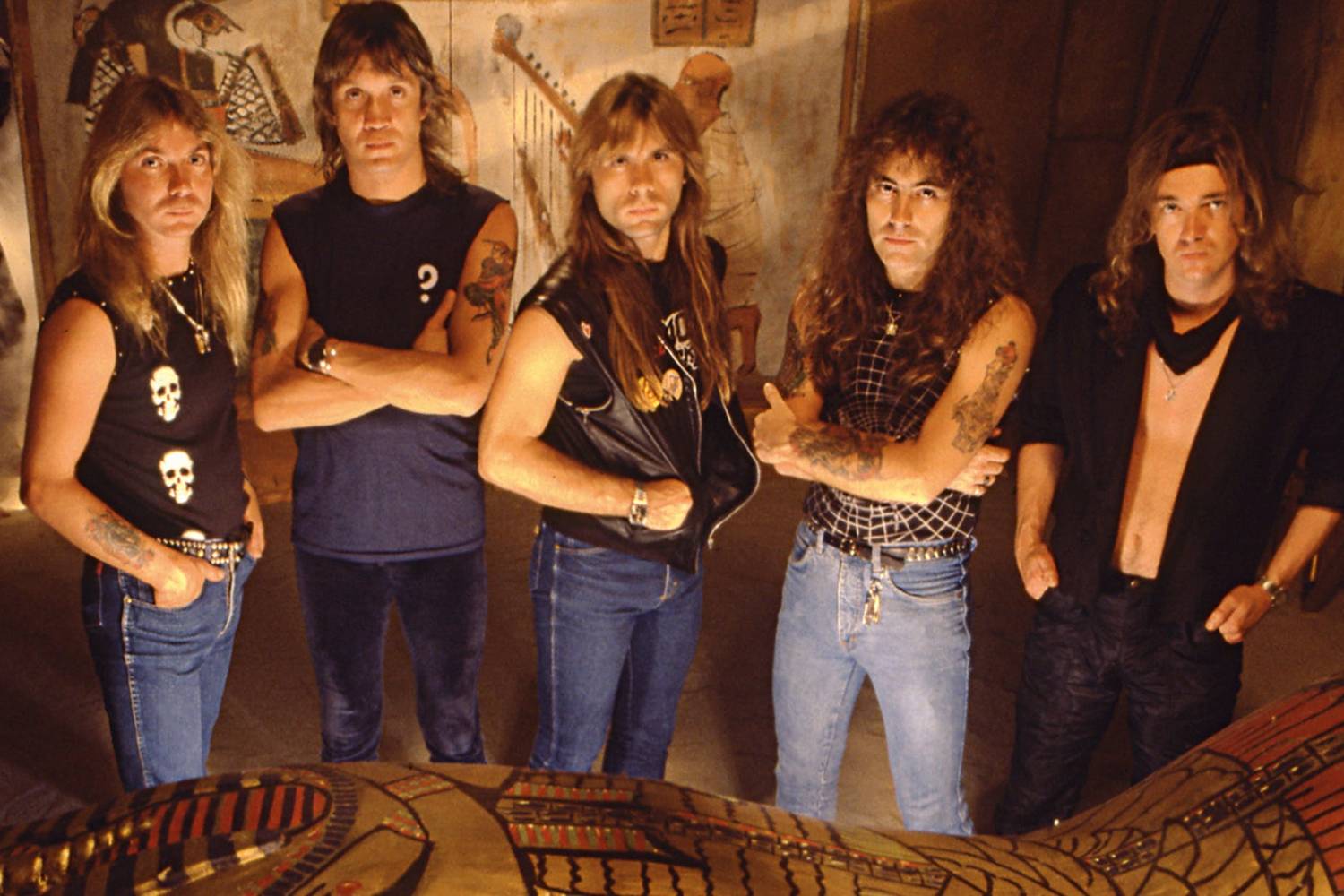 It doesn’t matter what time of day you check out “2 Minutes To Midnight.”