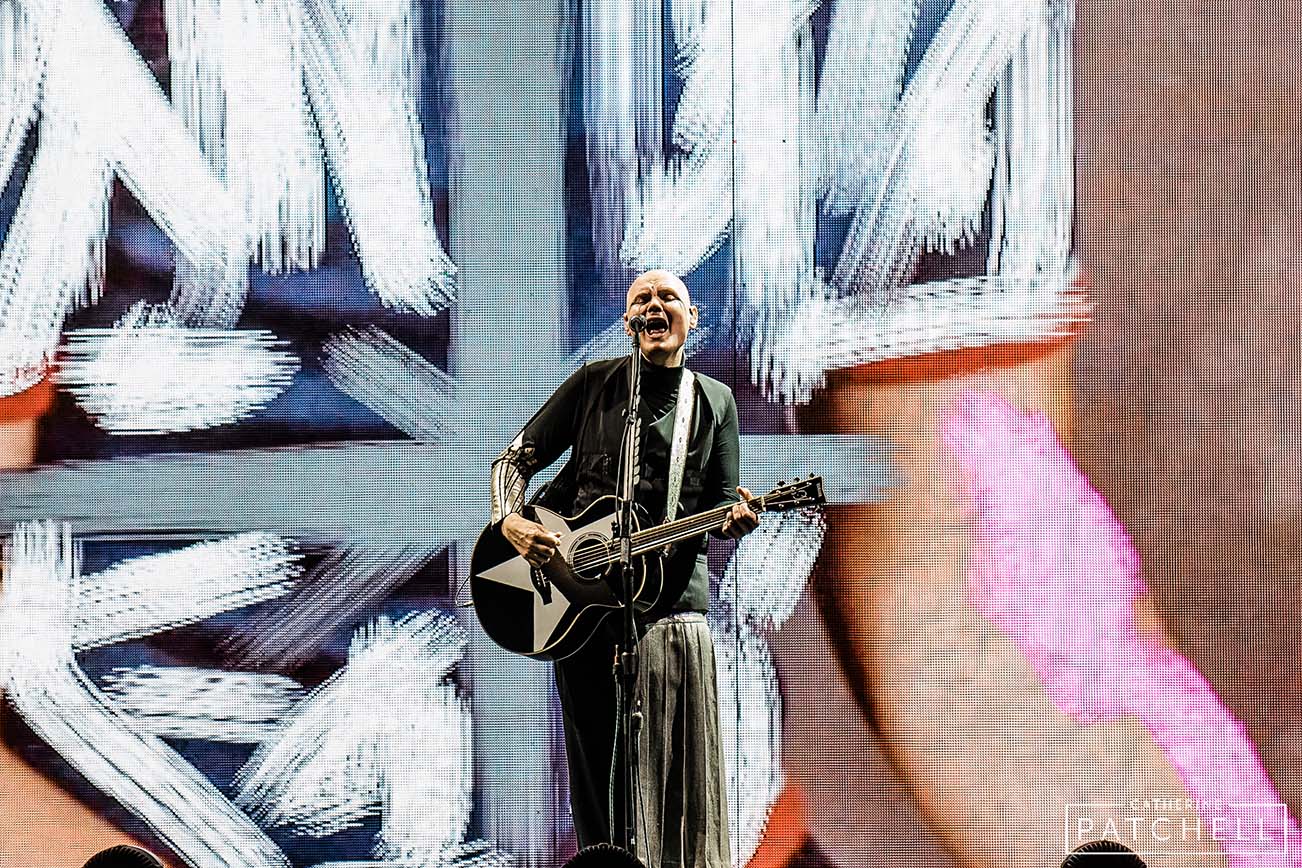 Smashing Pumpkins are just about to wrap up their reunion tour, which brought founding members Billy Corgan, Jimmy Chamberlin, and James Iha together for the first time in years. The Shiny and Oh So Bright tour kicked off in Arizona on July 12th and is winding through North America through September 7th. We caught up with the tour on August 27th at the Oracle Arena in Oakland, CA.

With an almost three-hour set, there wasn’t room for more than one opener. Smashing Pumpkins brought Metric along and it proved to be a great addition to the evening. I can imagine that large stages can be hard to perform on for some — lots of space to cover and harder to connect with the audience. The Canadian rock band appeared seasoned in the space and did a good job moving around and bringing their energy to the entire stage. Nearing the end of the set, the majority of the crowd had finally made it through security and the arena was packed. Metric’s last song was greeted with a mighty round of cheers from the audience as the notes to their most popular track, “Help I’m Alive,” came across the speakers. In less than a month, Metric will be releasing their seventh album – so here’s to hoping we get to see them again soon for a headlining tour in support of it.

We’re taking this “Rocket” back to a simpler time.

Next up, the moment the entire arena had been waiting for. The large back panels slid open like gates as Corgan stepped out onto the middle of the stage. A single light illuminated him from behind as he moved forward to start in on a solo acoustic playthrough of “Disarm.” The lights went out and moments later the rest of the band joined Corgan on stage, wasting no time to dive into “Rocket.” It was exciting and special to once again see the dynamic of the original members play out on the stage throughout the show. Multiple covers were spread throughout the set list — including Led Zeppelin’s “Stairway to Heaven” and David Bowie’s “Space Oddity” which included a magnificent backdrop of colorful space imagery. Even playing through ~30 songs that evening, Smashing Pumpkins didn’t slow down and delivered an amazing performance.

Of any of the recent times to hear Smashing Pumpkins music live, this tour was the one to come out for. It was a special experience to see the original members together, playing the nostalgic songs that brought me back to sing-alongs of younger years in the car with friends as the music blasted over the speakers. Smashing Pumpkins took us on an exciting adventure on this tour and it may be challenging to top it in the future.