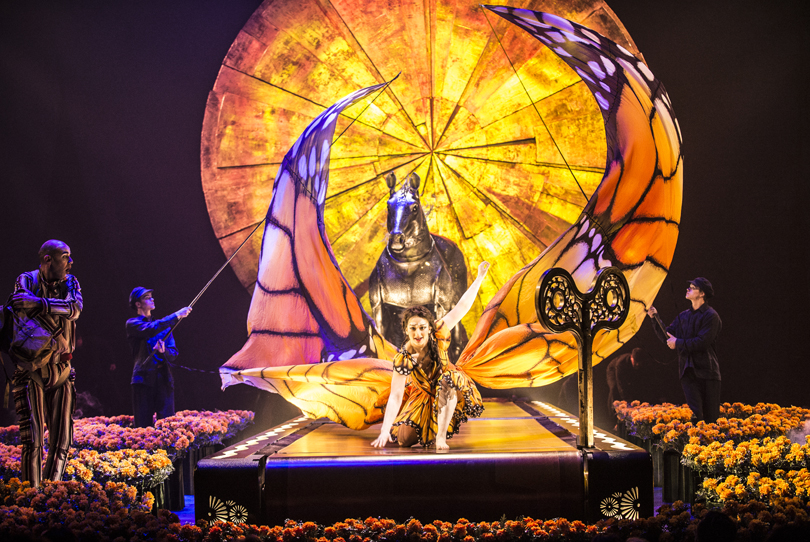 It’s a glorious time when the circus comes to town, and by circus I do mean the Cirque du Soleil. Playing until October 16 under the Grand Chapiteau at the Port Lands near Cherry Beach in Toronto, Cirque presents their latest show Luzia: A Waking Dream of Mexico. Inspired by the lush culture, nature, and history of Mexico, Luzia is a two-hour show that is dazzling, sumptuous and simply mesmerizing.

The new and most innovative feature in this particular Cirque do Soleil show is their use of water as a thematic element. The term “Luzia” stems from the words “luz” meaning “light” in Spanish and “lluvia” meaning “rain”.  A full water curtain using recycled water plays a heavy role for incredible effect throughout the show . The use of light shone on and through the water curtain is magical as are the performers who interact with the rain.

This Utopian vision of Mexico is filled with a number of various inspiring elements from the flight of the monarch butterfly who migrates from Canada to Mexico annually, to Mexico’s new avant garde architectural monuments. Humanoid beings with hummingbird heads and wings come straight out of Aztec history which open the doors for other surreal beings to be part of the landscape of Luzia: people wearing fish heads, a lady wearing an iguana as a shawl, a woman dancing with an armadillo, and human-sized beetles. Part of the beauty of Luzia is how it brings whimsy and wonder to often-overlooked creatures in the animal kingdom.

Even before I lost myself in the brilliance of the acrobatics themselves, I was won over the beauty of the costumes and of the set designed by Eugenio Caballero who also did the props. I loved the lighting, the bright and rejuvenating sunrise along with the breathtaking projections on the water curtain. Costume designer Giovanna Buzzi completely outdid herself here. I loved singer Majo Cornejo‘s blooming red flower dress that actively bloomed and came to life on stage along with the hummingbird costumes for the hoop tumblers and the swimmers’ mirrored swimsuits. Also, the use of large-scale puppetry here is beyond compare. The man-operated horse and the massive jaguar are, in a word, unreal.

And then there are the performers themselves. My friend Elspeth who accompanied me to the show raved about the dancers – the petite Asian woman who was so tiny and so seemingly weightless that she was tossed around and caught by her male co-performers effortlessly, they were beautiful, elegant and incredibly sensual. We were both very impressed by the hoopers who worked with the rain and the aerial artist that took to the air while they hooped below. At times I wasn’t sure who to focus attention on.

I was mesmerized by the male aerial artist and his interaction with the massive jaguar puppet. His strength on the aerial rope is stunning to watch and his connection with the jaguar was so intense I immediately forgot that it was a puppet operated by performers.

We loved the swinging trapeze artists and were amazed by how high the performers were able to launch themselves and remain suspended before gravity took over and they landed on the opposite swing with ease. Of course, we both cringed and were overcome with sympathy pains while watching the contortionist. Elspeth exclaimed, “I want to give him a sandwich and tell him to stop sitting on his head!”

The music composed by Simon Carpentier was a wonderful accompaniment to the show. It had some great brassy big band elements to it that I loved along with great acoustic Latin guitar. Latin and Mexican music have a great sense of vibrancy and romanticism that is prevalent throughout the soundtrack to Luzia. Cornejo’s rich and emotive voice accents the music perfectly.

Luzia is easily my favourite Cirque du Soleil experience to date and that says a lot considering all their shows are exquisite works of art. There’s still time to experience this wonderful show for yourself but don’t delay as tickets are going fast. You don’t want to miss this.