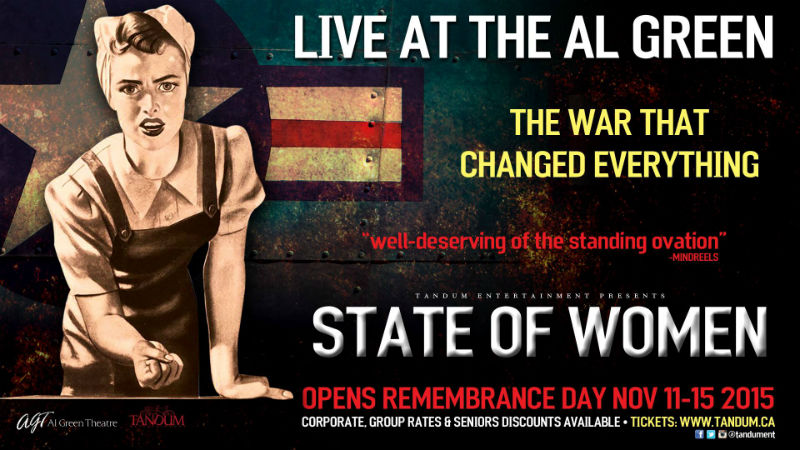 This past Remembrance Day I was fortunate to be invited to attend the opening night of State Of Women at the Al Green Theatre.  Directed by Tatum Lee, the production tells the “dramatic story of Eve Landing–an ex-housewife thrust into the chaos of WWII building warplanes for the Air Force in San Francisco, with a group of headstrong women“.  The story eventually leads to an ambitious young photographer capturing photos of these women and the images become published and ignite a controversial conversation around the role of women and the challenges they face.

The four main characters Eve (Alyssa Owsiany), Jean (Emily Dickinson), Julie (Olivia Clarke) and Pepper (Karen Scobie) were all inspired by a mixture of real women and Rosie the Riveter.  Although the fight for feminism and equality is still strong today, it was inspiring to be reminded of how much passion real women, like these characters, would have had to have, and that without women like these, our current state of gender equality may not exist.

I think what I didn’t expect but liked about the production was it’s unintentional telling of how these women and their fight affected the men in lives. Men who had been to war and affected by it came home to a completely new world of changed wives, mothers, sisters and friends. I particularly enjoyed Robert Notman‘s performance.  He played Eve Landing’s husband Nick. Not only did I feel his performance to be the most authentic, I couldn’t help but feel bad for Nick at times – a man who just wanted his wife and life to return to the way it was, as he discovered that, even though he was home he was still dealing with the effects of war.

The ‘State Of Women’ deals with many issues, including some I haven’t mentioned in order to keep a surprise element for anyone still intending on seeing the show. The show finishes it’s current run tomorrow, with Tandum Entertainment working on bringing it to a wider audience in 2016 & 2017.  I suggest checking it out if you haven’t already had the chance to do so.