American Idol alumni Adam Lambert is back with an all-new album after his short-lived acting gig on Fox’s television series Glee, along with a incredibly successful tour as vocalist for the classic rock band, Queen.

His new album titled The Original High features 11 songs from the pop musician, but has a new sound from what Lambert has been known for since he departed from Idol. Instead, it is a combination of pop-rock and techno.

As odd as it may sound, it’s an interesting direction that Lambert is taking in his music career, but with the help from his powerhouse vocals, it makes the album worthwhile.

We still hear the old pop-rock genre and sound from Lambert in his song “Lucy” featuring Queen guitarist Brian May, so fans can still appreciate that.

Songs like “Another Lonely Night,” “Underground” and the titled album “The Original High” were definitely some of my favourite songs on the album. “The Original High” and “Another Lonely Night” both have the techno and pop-rock combination, but it’s strangely enjoyable songs to listen to. As for “Underground,” this song is much more different from the rest of the album. Instead, Lambert creates an R&B vibe to the song with its triply yet beautiful beats.

This release also contains the lead single “Ghost Town”, which also spawned a video to hype the album before it dropped.   You can view the video HERE.

Not only is Lambert’s album a wonderful surprise, his lyrics are relatable, especially in “There I Said It” – a song about living in someone else’s shadows. He expresses his feelings through song and is able to finally say it out loud, so there, he said it.

Lambert’s new sound has shown how taking chances is worth the risk. He continues to bring new surprises as an artist and can prove that he doesn’t always have to be stuck in one genre.

The Original High is now available! 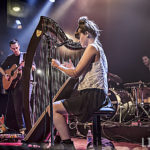