Within the Ruins recently released their earth-shattering full-length Phenomena, adding to their already amazing repertoire. This Summer, after 6 months of writing and recording, they headed out on the road with the Summer Slaughter Tour to give fans a real, live taste of their signature technicality and heavy style. I was lucky enough to be able to hang out with powerhouse vocalist Tim Goergen, at the New York City stop on August 8, 2014, and find out a little about what’s next for the band, as well as talk comics, beer and life on the road.

Summer Slaughter is very different from Warped Tour or the Mayhem scene, which a lot of bands tend to go on. So how’s the tour been?
Goergen: It’s been good, it’s an indoor fest, which is different because for the most part it is more personal. It’s 700 to 1500 to 2000 max capacity, so when we get a packed crowd it’s very much intimate. Everyone who is there is there to enjoy the music. They don’t have other stages to wander to, so whoever is playing is just playing and that’s sick. It’s a community—the underground community definitely comes together on Summer Slaughter more so than any other tour I think.

What are you guys planning on doing after the tour?
Goergen: We have a month and a half off to enjoy the rest of the Summer, then we’re doing a full U.S. tour in the Fall with bands I can’t announce yet* and after that we’re going to do some Canadian dates, and in the new year we’re going to do some international stuff. The album just came out so we have to tour a lot.

* Just Announced! Tomorrow We Die Alive US Tour with Born Of Osiris, Thy Art Is Murder, Betraying The Martyrs and Erra.

Check out the song “Gods Amongst Men”

So you just released Phenomena, another full-length, only a year after Elite. What was the writing and recording process like?
Goergen: Different than any other record for sure, because usually when we write a record we write it in between tours. For this record we took 6 months off and just focused on the album. It was the first time we have ever done that. We basically just focused on the record, production, refined everything before we went to the studio, and yeah—Phenomena is the product of hard, hard, hard work. We live, breathe and eat this album!

I understand that Phenomena is based on Marvel & DC characters. Are you a Marvel or DC person? Do you have a favorite superhero or villain?
Goergen: My favorite is Wolverine, I am tattooed with Wolverine and Sabretooth. Just got Iron Man done. I’m definitely a Marvel guy. I actually got a tour of Marvel, they got wind of the concept of the album and they invited me for a tour here in Manhattan. It was breathtaking to say the least. They wouldn’t let us take a lot of pictures, but the ones we took are on our Facebook in an album.

I was sweating the whole time, I was trying not to fanboy out, trying to be as professional as possible. But yeah, they’re very cool and interviewed us about to record and are behind it, which is awesome. We’re trying to get DC behind it as well. For this album, I wanted to do something totally original, that hasn’t been done before and I feel like I did that (with the lyrics).

What was your weirdest fan interaction?
Goergen: The first thing that comes to mind is when we were signing autographs outside of a show one day, and this guy didn’t have anything for me to sign so I signed the back of a piece of pizza that he was eating. 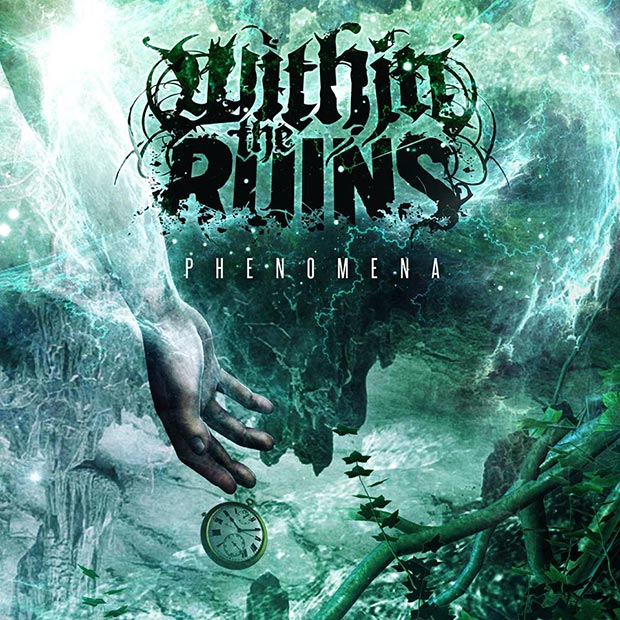 What’s the most embarrassing music you’ll admit to listening to?
Goergen: I listen to some dubstep here and there. I guess whenever I’m driving I like to listen to Mindless Self Indulgence, and I’m the only guy in the band that likes them. Every time I put it on they’re like “what the fuck is this!” I’m like, “Just go to sleep I’m driving.”

Have you ever had something go really wrong during a show?
Goergen: Yeah, we run our whole set through a session on a laptop, and it’s actually happened that we’ve played a set in Georgia that there was no ventilation at all, it was literally 200 degrees in the room, everyone was dying of sweat, and our computer just died. We were like, “OK, what do we do?” We didn’t have a second guitar track or anything playing, samples, or anything. We were like “let’s just go with it. Either that or the entire PA puts out.” We were playing and the lights go off and everything goes off, we’re like “uhhh hello?”… The cops are like, “the show’s shut down, everyone has to leave.” That’s happened before too. But when the computer died we still played, the show must go on. It’s something a lot of bands do nowadays, run a computer for tracks and everything, a click track for the drummer. But I would say that cops shutting down the show before the headliner even gets to play would be the worst.

Do you have a pre-show ritual?
Goergen: We all drink 2-3 beers, you know, get the blood flowing. I do some vocal warm-ups, a couple push-ups, and then get up there and do what we do everyday.

Favorite beer?
Goergen: That’s a tough one. On a normal day, I’ll drink a Miller Light or Coors Light, but if I’m feeling fancy, I’ll drink Stone or Lagunitas, Sierra Nevada, whatever craft brew I haven’t tried yet. We always visit breweries when we have a chance, any kind of different beer that we see we’ll try. Our guitar player Joe (Cocchi) actually started a brewery called Tin Bridge Brewing, so look out for that. They’re going to start branching out and selling the beer. It’s in the baby stages now. He runs it with his brother and cousin, and if you go to our YouTube page you can see a special on it where he explains everything*. They’re in the process of getting all the licensing, and the rest of the band is going to be involved. They’ll eventually start sponsoring bands and tours, doing that whole thing.

Do you have any secret talents or cool hobbies?
Goergen: Besides collecting comic books, me and Joe (Cocchi) are very much into fitness and keeping in shape. It’s kind of hard on the road with the food that you’re provided with sometimes. But yeah that’s one of our hobbies, keeping healthy and looking decent. We bring a couple weights with us on tour and if we have time we’ll go to the gym, say we’re trying it out for the day and they’ll usually let us in. It helps with the stage performance as well and our overall morale, energy. Even if you’re deprived on sleep, if you get a decent work out in it compensates. Our bus broke down 2 days ago in Milwaukee, we had to miss Detroit and the Buffalo show. It sucked because those are two places we love playing, but we had to get our van fixed. Trials and tribulations of the road, but we always make it up. Every show we miss, we always make it up to them.

You guys are troopers.
Goergen: We’re road warriors for sure!