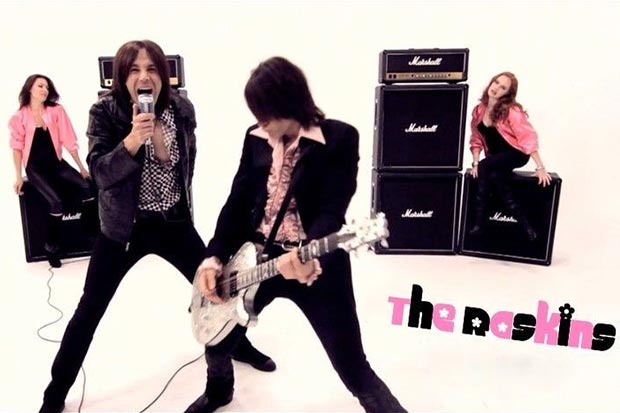 With a new self-titled debut and an opening spot on Motley Crue’s “The Final Tour” with Alice Cooper, great events continue to unfold for New York City natives The Raskins.

Identical twins, Logan and Roger Raskin wrote music for film and television before forming their group. Yet, The Raskins is the first band they have actually played in together, with Logan on lead vocals and Roger on guitar and vocals. For most who have made music their vocation, the path is usually the other way around: writing and scoring music for movie and TV seems often to follow years of touring and making records.

Through the advent of social media outlets, the Raskin brothers began receiving correspondence from people worldwide regarding where they could see the band live. “They were hearing our music in a lot of these TV shows,” says front man Logan Raskin. “And, so for my brother and I, it was pretty much a decision that was an easy one to make for us. The writing was on the wall so we just figured it was time to put together a band. The name of the band and the debut album came easily.”

Check out the song “We Had It All”

Be it by nature or nurture, the brothers’ talent was likely fostered by parents who were accomplished musicians. Their mother Judith, known as Judy Lee, was a jazz singer who performed with some of music’s most notable talent of the time. Their father, Tommy Raskin, performed on Broadway, playing lead roles in such shows as Annie Get Your Gun, Oklahoma, and West Side Story to name a few. Generations later, the tradition continues as Logan and his brother Roger make music for a vocation and as a way of life.

The making of The Raskins (released May 13, 2014) took about a year and a half. “We probably recorded about 50 to 60 demos,” Logan says. “I loved a lot of stuff we did in the demo process, but basically we just chose just 12 songs that we felt represented us the best, stylistically.” The songs showcase the Raskin brothers’ range with up-tempo rock songs, radio-friendly pop rock songs and a couple of ballads. “I think there’s stuff on there for everybody and we’re happy with the results of that.”

Logan and Roger both write the material, and their different styles of writing complement each other, according to Logan, who concedes that he and Roger have different personalities. “Even though we’re identical twins, we are very different and it shows in our writing style. I’m a little more aggressive than Roger. My lyrics might be a little more risqué than his. He’s a little more passive.” 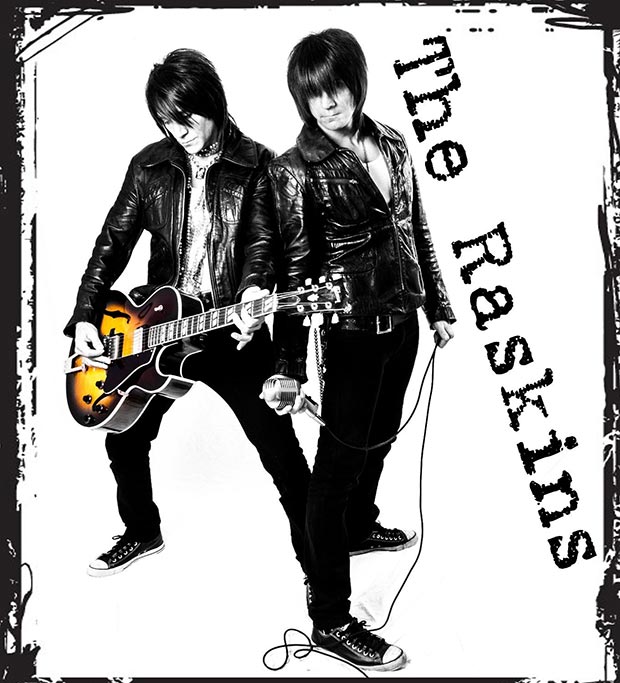 “It’s a pleasure to have someone like that to bounce ideas off of,” he continues. “We have a recording studio in our home, which, for us, music is constantly in our head. We recorded the whole album ourselves, in our studio. We did it all ourselves.”

The Raskins were booked for some tour dates with ex-Stone Temple Pilots singer Scott Weiland’s band, The Wildabouts. “We were out with him for about a dozen shows. Then, in the middle of that tour, we got asked to do the Motley Crue/Alice Cooper tour. We were all a little in disbelief but here we are. We were able to work it out and the agents worked it out. Two weeks before the tour started, we got on, doing the whole tour, 66 shows.”

The tour wraps up October 28th at Madison Square Garden, the Raskins’ home turf. “I don’t know how that’s going to feel for me,” says Logan. “I can’t really wrap my head around it yet. The first band I ever saw was KISS with Judas Priest at Madison Square Garden. And one of the first albums I ever bought was KISS Alive. You look at the back of the album and there’s this picture of thousands of fans at Madison Square Garden. I must’ve looked at the back of that album a million times and just dream. That dream becomes a reality October 28th for us. It’s a little bit away and I don’t think about it too much because it’s overwhelming for me, but it’s on the schedule and it’s going to happen, just like the Hollywood Bowl happened.”

Check out the song “Lost In The Dark”

The Hollywood Bowl and Madison Square Garden are two highly-revered venues where starry-eyed rock and roll bands aspire to play. “These are the biggest shows we’ve ever done. It’s been a lot of fun for us. The chemistry’s real good and the tour’s been great so far. I just can’t wait to see how things go from here forward.”

“It’s cool to tour with bands where you just love their music. It doesn’t get any better than that. I don’t think too much ahead. Neither does my brother. We basically take it day by day and that’s what we’ve been doing up to this point. That’s what I’m telling our agents and management. Just keep us out as long as possible. We’re kind of in cruise control right now, taking one show at a time. But you gotta tour a record. For us the whole point is to get to as many people as possible and that’s what we’re trying to do. My plan is to tour through all of next year.”

“For my brother and I it was never really about making a tremendous amount of money. We love music. We’re music fans. We’re passionate about music. Just to have the opportunity to tour full-time, and to be able to get our sound and our music out to this many people—it’s an honor for us. I’m the happiest guy on the planet.”