“To follow your own vision without compromising and conforming to other people’s demands and expectations would make you a king in what people would just define as a dead end”, says Katatonia’s guitarist Anders Nyström when referring to the title of the band’s ninth full-length album Dead End Kings. Despite being around for more than 20 years, these Swedish purveyors of heavy, gloomy soundscapes and dark, melancholic lyrics still keep pushing their own musical boundaries. “Stylistically”, Nyström acknowledges, “it continues where the last album Night Is The New Day ended, but once again we’ve tried to sharpen the sword in terms of performances and the sound. The rest is up to our listeners to discover….” 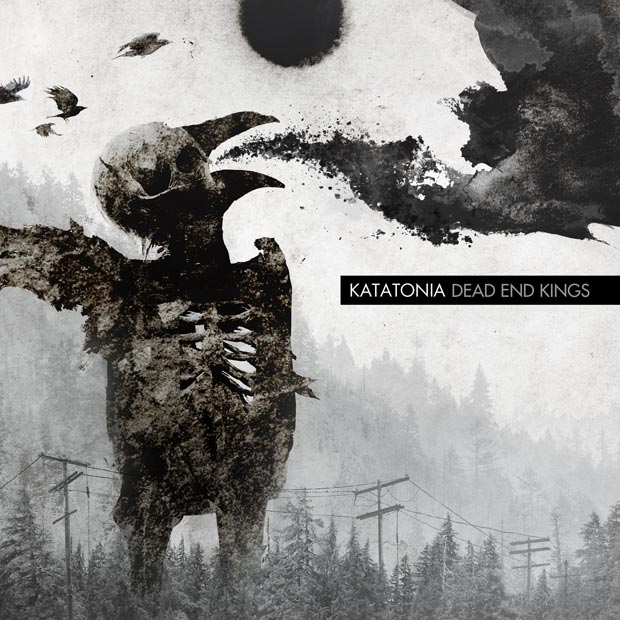 The new album also features the work of Katatonia’s frequent collaborators keyboardist Frank Default, producer and engineer David Castillo and American cover artwork designer Travis Smith. The latter of whom has been an essential part in producing visual imagery for the band for more than a decade. “Travis has done the cover for every album we’ve released since 1999. He’s a great, talented guy. There was no question really; it had to be him. It’s a tradition and it hasn’t been broken”, says Nyström about appointing Smith with the task of designing the cover artwork for Dead End Kings.

Regardless of their confidence in the designer’s talents, both Nyström and singer Jonas Renkse (the only founding members in the current Katatonia line-up) made sure to be part of envisioning the cover and other visuals inspired by it. Both musicians came up with the initial concept, eventually writing their ideas “as detailed as we could, almost like a script”, remembers the guitarist. Then, they “sent it over to Trav along with referential images of the color, tone and atmosphere we wanted to build. This is the way we work and how it always starts. Trav also came up with a lot of ideas for (the booklet’s) interior images when he read the lyrics, which very much deal with what they have always dealt with: the dark side of life and all its attributes.” 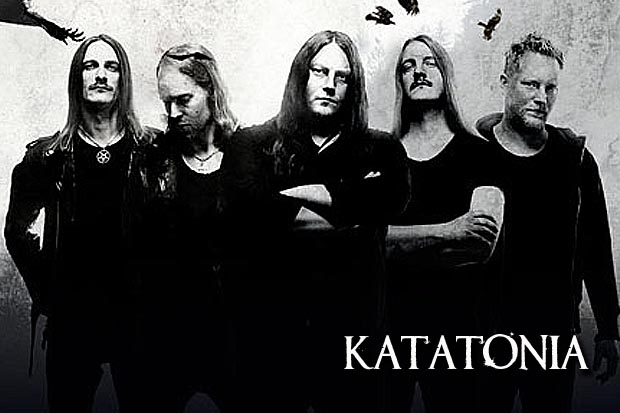 Indeed, ‘a very particular kind of darkness’ could be the accurate description for the cover’s bleak scenario: a very ominous relationship between both man’s and nature’s decay. A sort of paradox between urbanity and the wilderness. A landscape coming out of nowhere and going nowhere: a the dead end. “We also have that paradox in the title already”, affirms Anders. “So this just enhances it.”

Moreover, the grey, white and black monochromatic color palette helps to subtly intensify both the unpleasant vibe of the cover’s scene and feelings of abandon and loss of hope. Elements such as birds reappear here as part of one of the band’s recurrent leit-motifs. “The bird has always been a symbol of death for us”, confirms Nyström. “It was also featured on the cover of Brave Murder Day (1996) and Tonight’s Decision (1999). It also appears in our lyrics from time to time in lines as ‘the call of the bird’, ‘we called on the bird long before’, etc… This time the bird is a mutation of a giant man with an hideous proportion to represent the ‘dead king’ and he’s spewing crows as to tenfold the omen of the bird.” 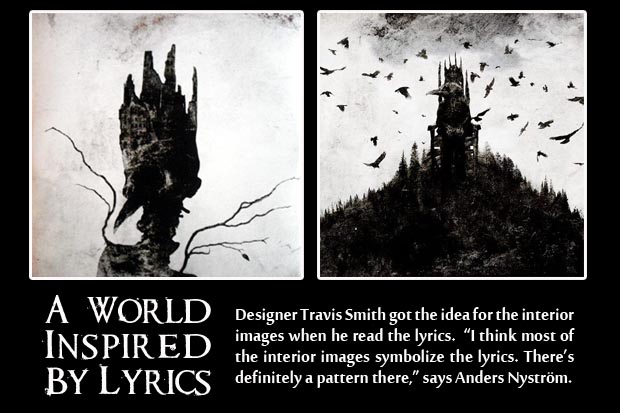 It’s precisely, on the full horizontally-oriented artwork (assembled digitally by Travis using photography, sketches and painted textures) that the aforementioned description takes a broad significance. Limited to the boundaries of the square-like shape of typical album covers, the whole illustration tends to lose part of its dramatic impact. However, the band doesn’t seem to be concerned with that issue. “This was done deliberately, almost like a teaser. I love when you see an image, get used to it and then you find out that it was just a part of a bigger scenario and then, all the weird impressions fall naturally into place. The original panorama really comes out amazing on the gatefold sleeve of the LP!” 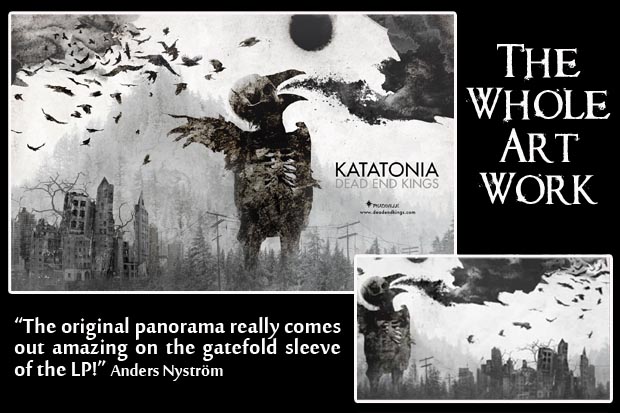 Regardless of all its dark nuances and melancholy allusions, Katatonia couldn’t be happier about Dead End Kings’ musical results. “It seems this album might even be considered our ‘break through’ as it reached a lot of charts and landed positions we never thought were possible,” enthuses Nyström. The feedback and the reviews are also the best we’ve seen and experienced in our entire career! There’s also complete satisfaction about the finished cover artwork and its designer: It’s beautiful! I have to say that I absolutely cherish the collaboration we have with Travis. He’s a great guy, a talented artist and it’s just an honor that we share the representation of Katatonia together with someone who lives across the Atlantic. He should be included in the line-up, haha!” 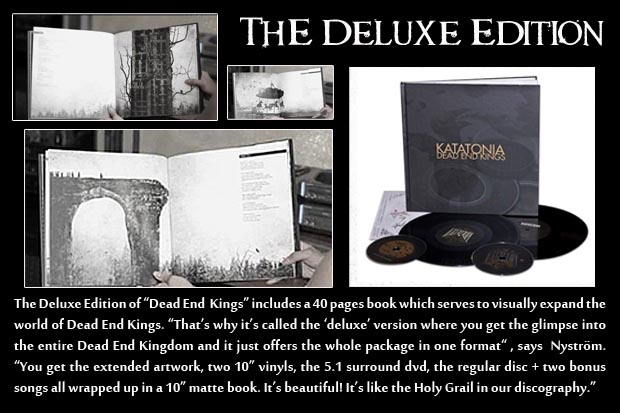 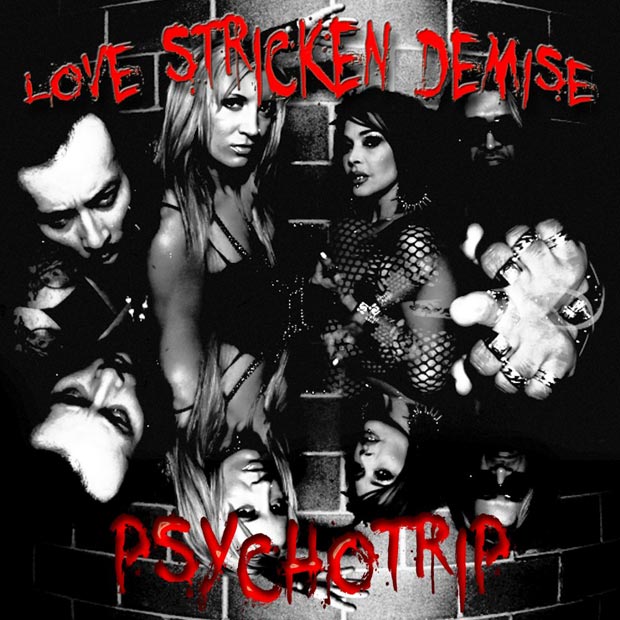 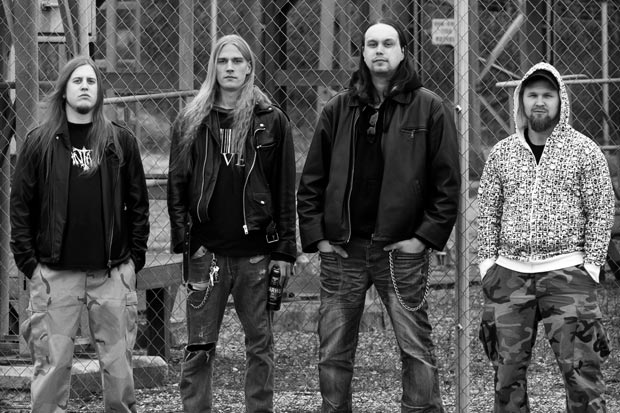