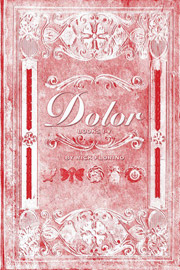 With Dolor author Rick Florino has created a world that is as gripping as it is repulsive; kind of like a car wreck, you don’t want to but you’re compelled to look. F.B.I Agent Jeffries arrives at the small town of Dolor to investigate a fire that has burned the whole town to the ground with the exception of one lone house. While this remaining, solitary house is completely charred on the outside Investigator Jeffries finds that inside is a much different story and much to his surprise, everything appears normal. After a bit of poking around Jeffries finds ten small diaries, each written by a different resident of Dolor and dealing with their deepest, darkest secrets.

As the name implies Dolor is a serial novel and this book contains the first five diaries. It begins with what I believe to be the most haunting of the group, at least psychologically. “Lila” is a story of a father who has lost his 3 year old daughter in what appears to be a tragic drowning accident. Florino’s writing is colorful, tight and precise and I found myself immediately if not reluctantly sucked into the drama. As a parent myself I initially found this story a bit unsettling, but even so I couldn’t put it down. Florino plucks a nerve and gets up under your skin and into your psyche.

The remaining stories in this book deal with all manner of taboo and supernatural themes including vampires, evil rituals, child abuse and murder. The beauty of these stories is that they all work on multiple levels. On the surface they function as horror or suspenseful stories that keep the reader engaged and moving right along. On a deeper level though, all the stories have a physiological component that cuts to the quick and gnaws at you.

To further add to the suspense and create even more anxiety the individual books are being released separately one at a time. I enjoyed these stories so much that the anticipation of the next five books is going to drive me crazy. At the end of the day Dolor is a terrifically diabolical, nerve-wracking read that is sure to haunt you long after you have finished with it.