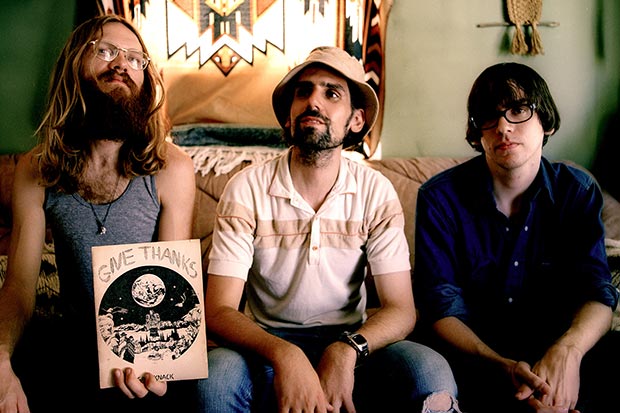 Jason Simon the guitarist and vocalist for the band Dead Meadow spoke with me by phone about their latest project The Three Kings. This is quite an ambitious release for the psychedelic classic/indie rock band and it includes a live CD, five new tracks and a DVD/Film that documents the last performance on an eighty-nine date tour. The band has been cranking out their unique brand of Rock and Roll for the past ten years and they show no sign of letting up. The Three Kings is a terrific package that offers hours of listening and viewing pleasure. Here is what Simon had to say about the project.

You guys have been out on the road for the last three weeks. How has that been going?
Jason: It has been going really well. The shows have all been great but we ran into a problem when the drummer’s gear got stolen from the van.

Now that your brand new CD/DVD The Three Kings is complete how do you feel about it? Are you satisfied with the outcome?
Jason: Oh yeah, I think it is a really cool package. I really like all of the new songs and I think the live songs capture the band at its best. The DVD is pretty special too. It is a pretty cool feature length concert movie and is one of the best I have ever seen.

Different groups have unique ways of writing their songs. How do you guys go about writing your music? Is it a collective effort or is it more the efforts of one particular member of the band?
Jason: It is always a collective effort. Sometimes the songs might start from an idea we have when we are all playing together. Other times they might begin with an idea I may have or some lyrics and it always comes together when we play together. It always changes drastically from what I originally had. When we work on it together and each person adds their own elements it becomes something bigger than the individual parts.

Give us some insight into the record The Three Kings and the meaning behind its title?
Jason: I think it has many levels of meaning but it is basically about the three wise men from the East that brought knowledge from the old world to the new.

What can fans expect when they pick up a copy of The Three Kings?
Jason: The band had played eighty-nine shows in a row so the live stuff is really very tight. There are five new tracks from the new record we are working on and the movie is our version of “The Song Remains The Same”.

The name of the band Dead Meadow is interesting to say the least and sounds as if there is a story behind it. Where did the name come from and what is the story?
Jason: Having formed in Washington D.C. ten years ago in a time where all of the band names were very short and un-psychedelic we really wanted something that carried with it some cool imagery and brought to mind some of the classic bands that we grew up loving and listening to. Bands like Black Sabbath and Led Zeppelin.

Do you feel as though the band is getting more respect now than it did ten years ago?
Jason: Yes definitely. You know it has been a natural progression and it keeps picking up speed, sometimes it seems to roll faster than others but we are playing more and more places and things just seem to be getting bigger and bigger.

Are there any tracks on The Three Kings that are personal favorites or that have good stories behind them?
Jason: I don’t know if they are stories or not but I would say I am a big fan of the newer songs. I really like “Push ‘Em To The Crux” It is kind of a heavy song but heavier in a cool rhythmic way as opposed to just blaring distortion.

How is the current economic slump affecting your band?
Jason: It affects everyone. Whether the clubs are making less money or not they will try to pass it off on us by saying “these are hard times we can’t quite pay you what we used to”. I think people aren’t going out as much either. I mean it is hard to spend that kind of money when you are not working at all.

I know you are currently on the road right now but wow much roadwork do you expect to be doing for the rest of 2010?
Jason: This tour is pretty long. We are touring through all of the United States, all of Europe and we are talking about playing in Australia later in the year.

Any closing words?
Jason: I just hope to see everyone out there on the road.  [ END ]