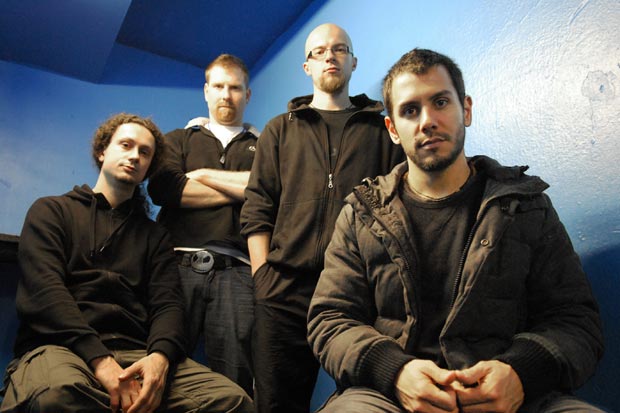 They’re back! With the release of their newest disc, Re-traced, Cynic are back in full force. Frontman Paul Masvidal chatted with me recently about the new disc which has an interesting amalgamation of extreme Metal riffing fused with the rhythmical intricacy of Jazz and the melodic complexity of Progressive Rock. According to the band’s bio they describe their music as, ‘“sci-fi prog folk”, which is part psychedelic rock and part minimalist restraint with tunes referencing some of the band’s favourite musical forms like Electronic/Ambient, Jazz/Fusion, Drum n’ Bass, Experimental and Shoegaze. Here is what Masvidal had to say about the new disc and the band what we can expect from the band in 2010.

Your brand new CD titled, Re-traced, is set for release on May 17th. Now that it is complete how do you feel about it? Are you satisfied with the outcome?
Paul: Yes, I am. It’s an honest work and has a very unique sound. We stripped the tunes down to their bare essentials and rebuilt them with new ears.

What was the writing process like for this CD? Did you guys all write together? How long did it take?
Paul: I recorded guitar and vocal demos in my home studio and gave that to the guys. Sean came over and we explored rhythmic aspects and he recorded a bunch of different parts as an experiment. I then gave everything to Tymon and he explored more layers and production ideas. We would get together and add or subtract parts as needed. It was really about letting the songs dictate their own course. The whole album was written and recorded in a month. The songs already existed as productions in previous incarnations, so this was more of an exploratory creative process for us in terms of re-defining them.

Can you talk about some of the subjects you tackle on this record?
Paul: Presence, nakedness, surrender, compassion, the cycles of life, to name a few.

The songs on your new record are not exactly what you would find on your typical hard music album. You offer a welcome range of musical sounds and abilities. Do you think this is due in part to your varied influences and/or a desire to explore new realms of music?
Paul: Both. We’re fans of all kinds of music and enjoy playing different musical styles regardless of an association to a particular genre. I think Cynic’s job is to expand and explore and essentially create art that has no boundaries. That’s what we do best.

Are there any tracks on this disc that are personal favorites or that have good stories behind them?
Paul: Integral was a scratch nylon string guitar and vocal demo that we ended up leaving as is. We overdubbed some wine glasses and Hammond organ for subtle color, but otherwise it’s a performance that captures an interesting moment. It’s got a really pure vibe.

This record takes chances artistically. How hard is it to take chances with your music in an industry that is declining?
Paul: I couldn’t imagine thinking about the music industry when writing music. That wouldn’t be very helpful to a creative process, at least for me. I’m just interested in writing great songs.

What is the toughest lesson you ever learned in the studio and on the stage?
Paul: I’m learning a new lesson everyday. Most of the time, the lesson is to not believe my thoughts. And also to realize I’m a human being in search of the impossible. The perfect song. But this existential angst is kind of what fuels the entire creative process. We have to find a sense of humor in the dance of being an artist and work with the energy in playful way.

All of that passion that you play with must be tough on you physically. How do you prepare for the physical demands of a tour?
Paul: Lots of yoga!

How much touring do you expect to be doing in 2010?
Paul: We’ll be touring moderately throughout the year and also working on a new record. We’re headed back too Europe in June and will headline a States tour in July and August.

Any closing words?
Paul: Peace and love for all.  [ END ]