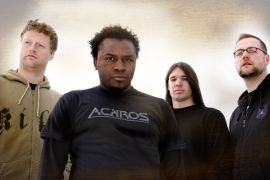 Belgium’s extreme metal band Leng Tch’e is preparing to release their latest CD, Hypomaniac. I spoke with bassist Nicolas Malfeyt about the band’s new CD and what the they have planned for 2010. Leng Tch’e refers to their uniquely brutal sound as Razor Grind but whatever you call it this is one hell of a pounding disc. Fans of the extreme metal genre will want to check this out when it hits stores on May 24th via Seasons of Mist Records.

Could you tell us where the name Leng Tch’e comes from?
Nicolas: “Leng Tch’e” is an ancient Chinese torture ritual where the victim is doped up and sliced into bits, leading to a slow death. Hence the name of our first album.

Many of your songs are so hard and intense that I am sure they translate well into a live setting taking on a whole new life in front of a live audience. How does it make you feel when the emotion and power that you envisioned in the recording studio, come to life while playing in front of a crowd?
Nicolas: The whole point of writing music for us is to bring it in a live setting. Why else would you make art? Art is emotion and receiving that emotion back from the crowd is one of the greatest feelings in the world. Often we try out new songs on stage before they are recorded, just to see how well they translate in a live setting. That tells us which parts work well and which parts still need some correction. Overall the live reaction to our new material has been amazing.

Your brand new CD, Hypomanic, is set for release on May 24th. Now that it is complete how do you feel about it? Are you satisfied with the outcome?
Nicolas: We’re very happy with the final result. We have put a ridiculous amount of time and energy into the writing and recording of this album. It really is our grand opus. We felt like we had something to prove with the new lineup and I think we have succeeded. Russ Russell also turned out to be the best producer we could ever work with. He lifted this album to a whole new level.

What was the writing process like for this CD? Did you guys all write together? How long did it take?
Nicolas: The entire songwriting process took almost two years. Jan (guitar) started writing new riffs right after Tony joined the fold as our new drummer in July 2007 and they have been working on new songs all the way up until the spring of 2009 when we started the recording process, which took another four months. All instruments were then recorded in different studios during the summer and finally we went up to England for the mixing and mastering process with Russ Russell in October 2009. Final mixing was not finished until February 2010 or so, right before we had to deliver the master to our label. A very long process as you can see.

Give us some insight into the album lyrically. This is a super pissed off sounding record.
Nicolas: Yes our new singer Serge is a very pissed off person apparently. We like that. Not only are his lyrics very pissed off, he also produces some of the most aggressive and brutal vocals I have ever heard. I almost went deaf sitting in the same room as him when he recorded the vocals. As far as lyrical themes go, he mostly writes about society’s corruption and the general stupidity of man.

What kind of music are you listening to? Do you keep abreast of new music? Are there any particular artists you like whose names might surprise us?
Nicolas: Yeah I try to follow new releases, although not much impresses me these days. The last Converge album I like a lot. I heard the new Immolation once, which sounds very promising. Last year I thought Burnt By The Sun and Coalesce put out the most interesting albums. Of course, the last Napalm Death was absolutely devastating. Basically, I listen to lots of different genres from death metal to grind to stoner to classical music. Kind of like Leng Tch’e, except for the classical part then.

When you are on the road for a while, I am sure you see and experience many different things you might not even have known existed. Are there any stories that stand out in your mind as being exceptionally strange or odd?
Nicolas: Eastern Europe is always a strange place to visit. We played in Moscow last month, which was like being thrown back in time. Also the kids acted like it was still 1987, awesome!

When you are out on the road anything can happen and often does. Can you think of any disastrous events that happened while out on tour? How did you solve the problem?
Nicolas: Mostly gear or vans breaking down. We had our clutch pedal come loose once in the middle of nowhere in the Czech Republic. When two local guys showed up we felt like we were in the movie ‘Hostel’ for a minute but luckily they turned out to be friendly handymen who didn’t even want anything in return, not even beer, which is very strange for Eastern Europeans.

How much touring do you have planned for 2010?
Nicolas: We’ve been playing quite often the past couple of months around Europe and we’re working on a full European tour for after the summer.

What have been the best countries to play so far?
Nicolas: No country stands out really, sometimes the crowd goes nuts in a certain place and then you come back the next year and the show is the total suck. Luckily, most shows we play these days rule. Everybody keeps telling us how brutal the new lineup is on stage so I guess we must be doing something right.

Any closing words?
Nicolas: Thanks for the interview, and everybody keep your eyes peeled for our new album Hypomanic coming out on May 24th (June 8th in the US) on Season of Mist records!  [ END ]