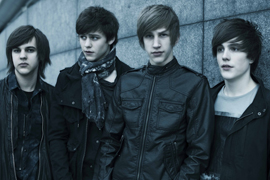 A very young, current and up and coming band is the British four piece called FranKo. Even though the average age in the band is seventeen, FranKo is already receiving some mainstream attention not only in Britain but also in North America. The guys are in the process of releasing a couple of singles while working on their debut full-length album which should be out in the next couple of months. As a live act, the group is just beginning to find its footing, playing shows here and there in the London area. Expect to see their record out soon followed by a tour and likely a trip to North America. Recently we spoke to FranKo’s lead singer Tommy Bastow to learn a little more about what FranKo is all about.

FranKo has been together now almost two years. How exactly did you all meet?
Tommy: Well Richard was in a band previously with Beau and Chris and I was in a band as well before and then Richard went to the same school as me and we sat next to each other in science class and from then on we decided to write music together. And both of our other bands didn’t really work out so um, I said to Richard “do you know any other good musicians?” And his bass player and drummer were perfect.

Growing up in South London, who were some of your biggest musical inspirations?
Tommy: When I was growing up, we were just a little bit too late for Blur; they had just kind of simmered down when we were growing up. The really interesting band for us was a band called Space; I think they’re a British band as well, really cool band. Guilty pleasures, probably Eminem when I was about seven or eight, I remember being obsessed with him for a while. Richard grew up with a lot of Queen and it was only when I started to get a little older that I fell in love with bands like The Beatles.

The band is currently working on your debut album. How has the writing and recording process been going?
Tommy: Yeah it’s been going great, we’ve been recoding for this album, it’s pretty much going to be two and a half years of work put into one album so there’s quite a lot to expect from it. We did tracks like “Night Climbing Today” like there’s going to be the commercial tracks and the radio friendly tracks on there but also some more intricate album tracks on there as well. We haven’t recorded a lot of songs yet either so we’re not sure, you know, if some tracks are good enough or is this second album material so we’re just kind of figuring out what to put on the album.

To produce the album, you worked with Jim Lowe who has also worked with the Stereophonics. How did you first get in touch with Jim about producing the record and what’s it been like working with him?
Tommy: Well his manager, well his manager at the time, sort of had seen us play and stuff and I think was interested in producing us and he picked Jim as a producer for our sound, he thought he’d be the best man for the job which he totally was because we got some incredible results.

What is the writing process like within the band? Do you all write together or is there one principle songwriter?
Tommy: Well it kind of varies at times, Richard will write quite a lot of songs and he’ll send them over to me because he can work on pro-tools and he can send them over to me then I’ll write some melodies and some lyrics. Some songs I’ve written the music for as well and for some songs Richard’s written the melodies and then obviously we show it to Bo and Chris and they put in their inputs and they turn it into a Franko song really.

I read that you toured Thailand last summer. What was it like to play in front of such a foreign audience?
Tommy: It was weird but a lot of fun. Like we arrived at the airport and we were met by some Thai fans and it was just like, we didn’t know what we were in for. And we went over there and we had the chance to play like ten shows and we had Thai fans following us to each gig and you know, it was really surreal but what an experience to have.

What are your touring plans like? Do you have a lot of gigs planned for the near future?
Tommy: Well we’re going to hope to be coming back to New York in October for the CMJ festival so that’s sort of like a mini kind of tour thing. Apart from that, we’re thinking of maybe touring in other parts of the world or we’re going to be doing a UK tour soon hopefully although we haven’t scheduled the gig dates yet.

We’re actually a website based out of Canada. Have you guys ever visited Canada? Can we expect to see you on tour here anytime?
Tommy: No, but I got a Canadian guy around my house right now actually speaking of Canada. No we haven’t been to Canada but we’d love to and you guys have Sum 41 and Avril Lavigne and stuff so we’d get to kind of see where they come from and check out their music scene.

You guys are obviously a very young band but who are some other young, up and coming bands out of the UK that we might not have heard of yet?
Tommy: Have you heard of Essa? He’s sort of, I wouldn’t say he’s young, he’s in his mid-20s but he’s sort of like the male, British Lilly Allen. He’s got some really cool tracks out; I think he went to South By Southwest, a festival in Texas last year so I think he’s going to be breaking America soon. You Me At Six seems to be doing really well over there, they’re on the Vans Warped Tour I think it’s called, they seem to be breaking at the moment.

Anyone else?
Tommy: Um, it’s hard because we get like really big bands over here and then we automatically think that they’re going to be big in America like Elbow. Even like really commercial bands, what are they called… who are the ones who won X-Factor… I can’t think of their name, anyways we were really surprised to hear that no one in America knew about them because you can’t go anywhere without hearing about them here.

Now aside from music, you’re also an actor. Could you tell us a little bit about your acting experience?
Tommy: Ok well I’ve got a role coming up in early September in a Spanish horror film which I’m really looking forward to. I’ve been in a British film called Angus, Thongs and Perfect Snogging and I play a sort of comical guy that the girls kind of connect with, well maybe not connect with but you know, the one who sort of gets his heart broken. I’m going to be doing the Spanish horror film and I’ve also been in an episode of Robin Hood as well, the ABC show.

Would you say you enjoy acting or music more?
Tommy: I think music probably takes priority, like with the band and stuff, like I wouldn’t take a part in something if we’re busy with the band. But they kind of work with each other too because neither of them are nine to five jobs every day.

What else does FranKo have planned for the rest of 2009 and early 2010?
Tommy: Um well we’ve got a double A-side single coming out on the eighth of September and pretty much it’s two singles, two A-sides for the price of one which we’re kind of giving away. Apart from that, we’re going to be coming back in October to CMJ Festival and we’re going to be recording our album and just finishing it off to get it released next year. So it’s busy times, definitely.  [ END ]