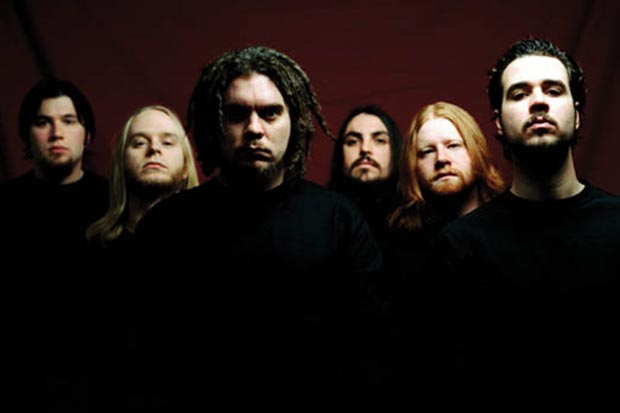 Metal band Chimaira has seen its share of ups and downs throughout their eleven years together, including the resignation, and return of drummer Andols Herrick. And yet they have managed to not fall apart and actually grow as a group, even releasing their fifth studio album, The Infection earlier this year. I recently interviewed Chimaira vocalist Mark Hunter about the new album, their unique mark on metal music, his love of mixed martial arts, and how they have managed to make it last over a decade.

On the new album you do some stuff with your vocals that you have never done before, why the change, how did you evolve to that?
Mark: With each album I like to step it up and try to improve my voice and try to step out of my comfort zone and try knew things and when we were working on getting the tones of the instruments you want to get a big drum sound and a nasty guitar sound and I wanted a nasty vocal tone. So we kind of played around with some ideas and tricks and kind of created a tone for myself as well. A lot of came with how I delivered it. There was just a little more attitude and a new way I tracked… I never used a hand held before as I would with a live show. So I used that as well so I could move around as I would live and get different kind of like, inflections in my voice that I normally have a hard time doing when I’m just straight on at a mic, a microphone that you can’t move.

On the DVD that came with The Infection I noticed that you were writing your lyrics in the studio. Have you always done that?
Mark: I’d had to before ya, but not an entire album. Usually before we go into the studio I’ll have about half of the album done and I have time to finish it while the other guys are tracking guitars and everything like that. This time we just went in with no ideas, no lyrics, and went song by song, and just kind of, “alright, how does this feel, what am I thinking? What does this song make me do?” And you think about it and just sort of start free-styling, for lack of a better term, and there was a couple times, where you know, you’re stuck and you have to get out of the room and start working at it a little differently with a new approach. Actually 95 percent of it was in the moment, just right there. Which was a really interesting way, very challenging and I wouldn’t do it again, but I definitely had a good time doing it.

So what inspires your song lyrics?
Mark: Anything and everything. Movies. I can relate to a scene in a movie and I can relate it to my life. For example, the song “The Disappearing Sun,” I told a story about it being a period in my life where I felt like the stuff that you keep inside was about to explode, you were about to come out of your shell I related that to the movie “Sunshine” and the monster at the end of the movie chasing that guy and stuff like that. So I told my story through the movie “Sunshine.” And I just like, watched the movie and put in my story and they are totally interchangeable, you could look at it as a personal story or you could see you’re reading about the movie “Sunshine.” So I kind of have fun doing it. It makes it really easy too, to come up with lyrics on the spot. And it gives fans something fun to do. I’ll let them know that the songs are like that and they go and try to figure out what movies the songs are from. Life and movies, to answer your question.

What is your live show like?
Mark: If I had to sum it up in just a few words it would be energetic, brutal and intense. And I’d use one more word, fun. I genuinely feel that our fans and especially new fans who have never heard of us have a good time. We usually don’t have trouble winning a crowd over. We could play with any kind of band and get the crowd going which is pretty awesome. We just spent a couple months with Disturbed which is a much more mainstream audience and we had no problems with that crowd whatsoever and we could go out with a band like Cannibal Corpse and their fans would love us too, so we’re very versatile and it’s fun.

Ya you guys are not underground but you aren’t mainstream either. Do you like where you are right now?
Mark: We’re at the time in our lives right now, we’ve been doing this now for eleven years and we’re at this point now in our career where we feel like we have solidified our name. We have a strong fan base and a loyal fan base and instead of chasing impossible dreams like you did when you are young we realize, “okay, this is who we are now,” we can capitalize on our fans and give them the best that we can be, focus all our energy on what we have now and steadily it just keeps building and building, which is cool, that’s the fans spreading the word for us. It seems like we’re getting a whole new generation of fans coming in which is nice, we have a lot of younger people coming to our shows than before, a lot in the 14, 15 range, which is always exciting to see the new generation coming in.

In one of your DVDs there is a guy from Roadrunner going off on how terrible the first album is and how much he hated it. How do you guys feel about Pass Out of Existence?
Mark: [laughs] We still really don’t like it. We see it as, had we recorded the same way we recorded the follow up album it would have been a lot better. Some of those songs still work, it’s just overall that whole album was a little too heavily influenced by the producer we were working with and, us being a new band and not knowing any better wanted to impress the guy we were paying two thousand dollars to record out album. It’s not like we regret it or anything because we gained fans from that album and some people that’s their favorite album still. As far as the band is concerned it is probably the lowest on our totem pole [laughs]. I noticed that a lot of up and coming bands are referencing that album, that they like that one and I’m like, “really, that one? Okay,” Bands like Sucide Silence, they like the Pass Out of Existence album and we’re like, “okay!” We toured with them for a little bit and we were laughing, like, “really? that one?”

You mentioned earlier that you guys have been together for eleven years, and I know you have had drummer drama and Jim and Rob have had their feuds, how have you all managed to stay together for so long?
Mark: Communication. That’s key in any relationship I think and just as much as it is with a band or someone you are involved with romantically, communication is key. Don’t hold back and don’t be afraid to say things. Try to work it out if you have some sort of problem with something or somebody. I think we’re all responsible adults who were raised well and we look out for each other and if you get in a little tiff talk about it and it’s done, ya know?

It seems you guys have a lot of fun too.
Mark: Oh yeah, we definitely have fun, there’s no question about it. Every day there is something new that just, you’ve never seen it before and it’s ridiculous. And it could be a really small, minor thing such as trying something new to eat, or like yesterday we saw somebody just taking a shit on a tree right in front of our bus. Everyday there’s something new. It’s a wild life.

[laughs] I bet you have seen some crazy stuff!
Mark: When they say “I’ve seen it all, I’ve done it all, I could check off seen it all,” well, you think you could until the next day something new….

I hear you are into martial arts?
Mark: Yes. I started when I was 6-years old. I just took your average YMCA karate for six years. I wanted to be Bruce Lee and Daniel LaRusso from “The Karate Kid.” I took that for six years and then I got into music and started to dislike sports the more and more I got into heavy metal, I don’t know, that’s just the thing that happened for some reason [laughs] and I got into martial arts when I was a kid through Bruce Lee and later in life I discovered Tony Jaa who was in a movie called “Ong Bak” and “The Protector” and I decided to get back into this and I’m at a point in my life now where we have extended breaks, you know, six months off here, six months off there and I actually have time to do it. And I can afford it now too, which is nice. I started taking it a couple years ago, I’m taking Muay Thai and then I started to learn from my teacher as well, I’ve started to learn Jiu Jitsu and Taekwondo. Just some basic like street balling stuff as well and I’ve taking a liking to it and I try to do it as often as I can. I keep injuring myself, the older I get the worse my back gets and I’ll go into one class and throw my back out and be out for a month, ya know, and “damnit!” But I do it as often as I can and I still love watching the sport and reading about it and I try it as often as I can.

It’s getting more and more popular it seems…
Mark: Oh yeah, it’s great, I just don’t condone like the attitude of like, “alright, I’m gonna take a couple classes and throw on an Affliction shirt and all the sudden I’m a badass”, ya know? That attitude kind of sucks and that is the only thing I have found negative about the sport is that a lot of people think they can do it until they get hit the first time then they really don’t know what happened. We see it more often, you really need to be dedicated to last in the sport if you want to actually compete. It is not easy.

Does that influence your sound?
Mark: Ya, I think the fact that everyone is so diverse musically but yet can share a lot of common ground, it helps. We were listening to some songs last night and we were like, “oh man, that’s such a Chimaira type part” and it’s a song from the mid-nineties that we all grew up listening to. You don’t even realize it that you really can tell where you’re influenced from. Just like when you listen to Tool you can tell they loved Led Zepplin and Rush you know, you can hear it all over their music.  [ END ]