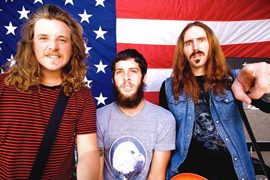 The San Diego based rock band Thieves & Liars have just released their sophomore CD American Rock ‘N’ Roll. For their second release, the band has amped things up a bit creating a tighter Rock And Roll record and avoiding the dreaded sophomore slump many bands fall into. I recently spoke with bassist and vocalist Joey Bradford about the band and the making of the new record American Rock ‘N’ Roll.

Every band has its musical influences. What are some of the other bands and artists that have greatly influenced you guys and your music?
Joey: I’d have to say that our main influences are the classic greats before us like Zep, ACDC, Floyd and so on. But, to go back even further we take a lot of inspiration from such blues greats as BB King, Son House, Howlin Wolf, Mississippi Fred Macdowel, Charlie Patton, and Henry Sloan. Anything with like three notes a song I’m stoked on!

Your brand new CD titled American Rock ‘N’ Roll was releaseed on September 1st. Now that it is complete how do you feel about it? Are you satisfied with the outcome?
Joey: We’re all so stoked to have written and finished recording this record. I know it’s standard to say that your current record is the best thing you have ever done but I think this record is just the most fun music we’ve ever written. I still love our first album and always will but it’s rad to have new jams that we can head bang harder to and still flow with the old jams in our live show.

What can fans expect when they pick up a copy of American Rock ‘N’ Roll?
Joey: American Rock ‘N’ Roll is a pure American, riff heavy, head banging album. I recommend taking a drive wile listening through the first time and try to keep your foot from slammin on the gas! With this record you get to hear more shredding from Corey and slamming from Kyle. I did my best to wreck my vocal cords as loud as I could use em. Get pumped!

What was the writing process like for this CD? Did you guys all write together? How long did it take?
Joey: We typically would write riffs either on tour or at home separately then bring it all together, jamming out at practice before getting into the studio. Our overall motivation for these songs was the San Diego Chargers. We wrote them with the potential to be played as the Chargers run onto the field. There’s nothing we love more than football and rock n roll!

What song from that album is still exciting for you to sing?
Joey: Well all the songs on this record are still new and awesome to play live but I think my favorite at this point would have to be, “Let’s Rock,” It is fast, loud, and shredtastic. This songs represents our band to me, better than any other song we play live.

What is it that normally gives you inspiration when writing lyrics and is there a theme or themes behind the writing of this record?
Joey: San Diego Chargers! We write lyrics as a band for the most part. I’ve tried in the past to write songs on my own and I always seem to hit a wall. When I’m around the dudes ideas and lyrics flow right out of me. I think the ideas Kyle and Corey have are the missing links to my lyrical mind freak.

How do you think your live show differs from your recordings?
Joey: Our records both are a pretty legit representation of our live show. This record, more than the last I think. We’re a pretty basic plug-and-go sorta band live. Turn it to 11 and play fast. You’ll get that same vibe from our records, too. I take pride in the similarities of our live set and record. Rock n roll!

Obviously, there is a growing process from the first album to the second. How do you think you have grown as songwriters and performers since the first album was released?
Joey: Our first record took us years to write and complete and was a pretty extreme effort. Lots of production and string arrangements. We had a boys’ choir and some over dubs. This record is a lot tighter but way more stripped down musically. Simple rock progressions with blaring solos and vocals that literally hurt to sing. It is also more concentrated on one style. I’m stoked on this record.

What lessons have you learned since the release of your first record?
Joey: It takes a long time to get people stoked on the tunes. I think this record is going to keep our current fans amped as well as gain us the support of a wider variety of rock fans. It’s a long way to the top if you want to rock n roll.

What is next for Thieves & Liars?
Joey: Were hoping to grow this band to be as legitimate as our mustaches. I hope you dig the new record and it gives you a little more pride in this country, muscle cars and football!  [ END ]