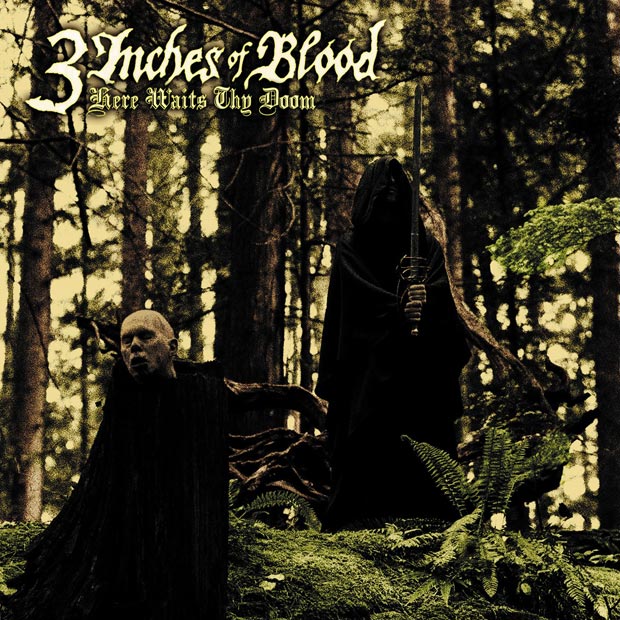 On Here Waits Thy Doom, mighty metal warriors 3 Inches of Blood return to the fray exploring new territory sonically and lyrically with some striking results, after releasing the acclaimed Fire Up The Blades in 2007. Their aim was never to simply put out a sequel to their last album as the band has said themselves, and Here Waits Thy Doom feels more diverse with some added emphasis on longer instrumental sections in their classic thrash style and the addition of some bluesy rock and an out-of-left field acoustic guitar track before the album’s furious closing number.

While some might believe that writing lyrics of the kind found in 3IOB isn’t exactly going to win you Pulitzers, the epic tales recounted on Here Waits Thy Doom are as great as any appearing on their previous releases. It’s probably true that stories about scaling a great unconquerable glacier or an unstoppable battle tank just happen to go perfectly with the type of thrash and power 3IOB is known for. Choruses on “Silent Killer” and “All of Them Witches” recall “Deadly Sinners” catchiness, a clear demonstration that the band has set off in search of new lands to conquer musically but hasn’t forgotten what they tapped into so famously on Advance and Vanquish and Fire Up The Blades.

New backing vocalist Justin Hagberg’s work is heard replacing Jamie Hooper who added ghastly wails on “Deadly Sinners” and other classics from 3IOB’s first three albums. Hagberg’s style is different from Hooper’s, but it’s clear that the change has been taken in stride as the band sought to try some new things with their sound anyway. Cam Pipes is still handling lead vocals, giving Rob Halford a serious run for his money with his falsetto style.

“The Preacher’s Daughter” is one of the best examples of the new 3IOB sound to be found on this album; a blues-rock song that might even sound at home played in a bar alongside AC/DC or Aerosmith. “12:34” is an instrumental acoustic track which might shock 3IOB’s faithful horde as a concept, but it falls into place nicely between witch hunt thrash “All of Them Witches” and the pounding assault of “Execution Tank” which takes the cake for most epic track, clocking in at a meaty 7:34 of album-closing annihilation.

A blend of old styles and new, Here Waits Thy Doom seems to be a natural progression for the band and totally slays it in true 3IOB fashion.  [ END ]