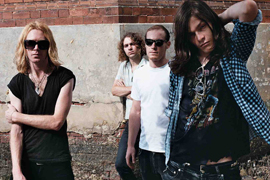 the Skinny: Australia’s new darlings of psyched-out punk-inspired rock, Regular John have exploded out of country-town origins and onto Australian airwaves by doing their own thing, their own way – no gimmicks, no bullshit and a refreshing honesty and passion sorely lacking in so much of today’s music. The foursome’s debut album The Peaceful Atom Is A Bomb, produced by Tim Powels of The Church fame, is the culmination of two intense years of hard living, hard partying and – more than anything – fucking hard work in the big smoke of Sydney. Featuring multiple singles including “Language”, “Abattoir Noir”, “We Spell Love” and “Final Solution”, the album almost immediately scored a coveted Feature Album of the Week slot with Triple J, Australia’s number 1 national youth radio station. Regular John’s single “Transmitter” is featured in Electronic Arts “Need for Speed: Shift”, which hits retail stores today. The game is receiving high marks from the top videogame media including a nine out of 10 from IGN PlayStation: The Official Magazine and Official Xbox Magazine.  [ END ]