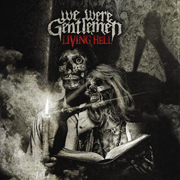 We Were Gentlemen – “Living Hell”

Within the past few years the Hardcore genre has become somewhat of a growing trend in North America with loads of new bands popping out of everywhere. This is no exception for We Were Gentlemen. Breaking through from Virginia, We Were Gentlemen have just released their debut full length, Living Hell, through Century Media Records.

Living Hell delivers much of what would be expected from a hardcore band. Steven Moody keeps a solid drum beat that anchors everyone’s timing while bringing a high amount of energy to each song. Kalan Blehm and Richard Neupert draw in some simple, but heavy guitaring with lots of chugging guitars and obviously… breakdowns. The bass parts follow the guitars becoming a backbone for the energetic riffs. Matt Tarpey delivers aggressive and straight forward shouting with the exception of the track “Cradle Your Filth” where some rare-in-Hardcore singing can be heard.

While it may be an absolutely solid collection of Hardcore, Living Hell sort of felt like déjà vu. The album was predictable and held no surprises. It is a generic hardcore album which is energetic yet every song sounds similar; not only to each other but to the scene in general as well. Hopefully a live performance would blow us away with some additional explosive energy. This record will appeal to fans of Hatebreed, War Of Ages, Cataract and Means. For the sake pf these gentlemen, and if you just LOVE all things Hardcore, go pick up Living Hell.  [ END ]