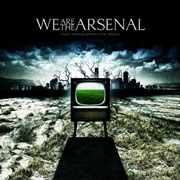 We Are The Arsenal

Let’s review this album then. Well, let’s introduce you to We Are The Arsenal. Describing themselves as Rock/Powerpop/Post punk, this Orange County band is made up of Ryan on vocals, Alan on bass, Peter on guitar and Kristopher on drums. They formed in 2006, and apparently in 2007 the world was told ‘WATA are coming’ (although, funnily enough I didn’t hear about it). Nevertheless they officially launched in 2007, and supported Angels and Airwaves on tour that year. So, we hope for good music then.

What did I find? Well, actually I really quite like this band. The first track “The Truth” rolls into “Sound The Alarms”, which I like. It starts the album with a moody tone which catches your attention, and then bam! A bit of foot-tapping drumming, then some chords are whacked in your face and some very punk chorus voices together: “we just want the truth”. Catchy enough, yes I was actually tapping my foot. Well done boys!

I like how well these tracks are recorded, I like the clarity, and I like being able to hear this singer’s voice. He isn’t gravelly, in fact very distinct in his voice. I am reminded of Beyond All Reason’s lead singer. The guitars and drums have tones of punk and indie interlaced with some plain and simple rock, a very Red Jumpsuit Apparatus sound (especially in “Airwaves”), and very listenable. This band is fast paced, catchy and energetic. I really enjoy this music to be honest, it’s not too scarily punk.

My favourite song of the album is “If I Did It”, as the band describe it, an explosive ender. Well I just like the opening lines really “There’s going to be a war tonight”, and there’s growth through the song as well as energy, and sometimes we like lyrics that don’t always have lots of meaning because it makes it more fun to sing along to!

“So Long” has its own a different tone to its preceding three tracks. Here, we see the band experimenting with the highs and the lows of a song, not just pure energy throughout like “Sound The Alarms”. “At An End” is also evidence of the variety this band could produce, just unfortunately they seem to feel the need to stick to their comfort zone with most of the songs, even in this one we find the lash of punky chants and a lot of “woah” singing. That seems to be their favourite phrase actually throughout the whole album.

Don’t let that put you off – the band I read are particularly proud of “If I Had Known” for being a bit more downtoned, with a climax of chorus at the end. Disappointingly short song, however, which demonstrates perhaps the bands’ inability to diversify for as long as a fan might like. We do enjoy a bit of variety, us fans.

Otherwise, I wasn’t disappointed by this band having never heard of them before. I am a fan of post-punk, and indie-rock and they seem to create a good measure of each and therefore are staying on my playlist. I can’t help but compare them to Red Jumpsuit Apparatus, Beyond All Reason, Fall Out Boy, and My American Heart. Maybe they are just staying in their comfort zone for the moment, maybe they want to be more mainstream. I definitely enjoy this music though, and as a first album the boys, nor I, should complain! P.S. check out the mini-track on the end of ‘If I Did It’!  [ END ]