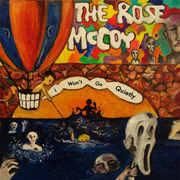 Southern Illinois based rock band The Rose McCoy just released their debut CD, I Won’t Go Quietly, on Wounded Records. Due in stores in May 2009, this record mixes skilled musicianship and a impressive production with straight up rock n’ roll tracks and first-rate songwriting. The result is a succession of six well-crafted metal tunes that are easy to become wrapped up in. A fusion of clean vocals, (“Inside The White Lines”) and distorted screams, (“Your Eyes Almost Told The Truth”) add dimension to this disc making it function on more than one level. At times, it almost feels like a Nu-Metal Record while at others, it becomes a bit heavier and more extreme.

I particularly enjoyed, “Inside The White Lines” which is an acoustic driven slower tempo tune that I could easily imagine gaining extensive radio play. The opening track, “The Weather Outside Is Weather,” is also worth mentioning; it is an emotion-filled rocker that really captivated me, so much so that I found myself replaying it repeatedly.

I Won’t Go Quietly is not necessarily groundbreaking but it is a solid and quite enjoyable debut CD that offers a collection of songs designed to engage fans of good music. There are enough melodies and catchy choruses to satisfy most listeners and those who like a bit more fiber to their music will not be disappointed either as the band incorporates some quite heavy passages as well.

Bottom line, this is a very well produced CD and I feel a successful and solid debut from a band we are certain to hear more from.  [ END ]

01. The Weather Outside is Weather
02. Foundations
03. I won’t Go Quietly
04. The World Has Not Known You. But I Have Known You
05. Your Eyes Almost Told The Truth
06. Inside The White Lines