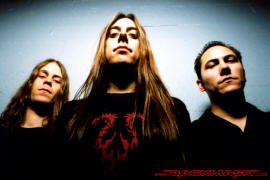 It’s not every day that a former scholar of classical music and an avid fan of Beethoven, Bach, and Vivaldi is also a long-haired metalhead. But in this case, Shane McFee, lead singer of the metal band Backmask, is exactly that. If you’re wondering where you’ve heard the name McFee before, rest assured that it’s not some trendy new McDonald’s meal. Instead McFee is the last name of legendary guitarist John McFee of the Doobie Brothers. Incidentally John is also Shane’s father and it’s overwhelmingly apparent where Shane got his musical genes. Having been conceived in a large 18th century English manor named Headley Grange (which was leased to renowned groups such as Led Zeppelin and Genesis), it is safe to say that Shane has been immersed in music literally since day one. In the year 2000, after a series of unfortunate incidents, Shane ended up with a ton of time on his hands and began writing his own songs. Determined and ambitious, it only took Shane three months to write an entire album and by 2001 Backmask was playing it’s first live show. Now with an EP behind him and huge plans forthcoming, I was lucky enough to get Shane to take some time out of his busy recording schedule to answer questions relating to his father, his musical upbringing, and more importantly, Backmask’s future.

Your father is legendary guitarist John McFee of the Doobie Brothers and Clover. Growing up was your dad a big role model for you and what is it like being the son of a rock music icon?
Shane: I think he’d be very flattered to be considered “legendary,” he’s very humble about his substantial musical accomplishments. Growing up, I didn’t think much about the unusual line of work my dad was in, or his unusual level of success in it. I knew he was a great guitarist and musician overall, and I always understood that his playing was on a level of its own, being that he can play virtually any style of music as well as (if not better than) the heroes of that particular style. I didn’t consider going into music until I was about 14 (my main interest was computers up to that point) but as I got into metal and guitar by way of becoming a huge Van Halen fanatic, music took over in a big way very quickly. It was then that my dad became a major role model and ally, and I continue to learn new things from him all the time!

Having been conceived in the very house where some famous Led Zeppelin tracks were written and recorded you were immersed in music almost from day one. What was it like growing up surrounded by music?
Shane: Well, in spite of all of that, I don’t consider myself a natural at music by any means. I had to overcome the same hurdles that most beginning musicians do when I started actually playing. If there’s anything I inherited from this legacy, it’s the persistence to accomplish my goals with music.

Let’s now focus on your own musical career. You started and front a metal band called Backmask. How and when exactly did the group come to form?
Shane: I had just graduated college in the Summer of 2000, and the same week that I graduated, I got fired from my job at a tech firm, and my girlfriend at the time dumped me. Needless to say, I had a lot of things to process and a lot of time on my hands. I wrote and recorded a full length CD in about 3 months, which I used as a tool to recruit musicians for my band. In 2001, BACKMASK finally debuted live.

How did you find your way into harder music such as metal even though you were raised being around classic rock?
Shane: Van Halen, Def Leppard, AC/DC, King’s X, and Extreme were bands I became a huge fan of when I was about 13, and through these bands I got into heavier and heavier music, which ultimately led me to death metal, black metal, etc. – but I never lost sight of my old-school metal or classic rock roots. I love growled vocals, but melody is very important to me. BACKMASK is the summation of all of these influences.

Backmask is certainly a very unique and intriguing name. Where did it originate and what does it mean?
Shane: It was an idea I had in college and it stuck. I thought it would be cool to name a metal band BACKMASK, because there is this history of classic metal bands like Judas Priest, Ozzy Osbourne, and Led Zeppelin being wrongfully accused of intentional backwards messages (or backmasking) on albums. What the name represents to me, though, is the manipulation of audio in general, and the creation of interesting, creative expression through sound.

The music that you produce is all very rich in orchestration. Is this at all due to the fact that you no doubt had a diverse and rich musical upbringing? What else contributes to it?
Shane: I think the biggest influence for the orchestration is that I spent 5 years of my life in college studying (primarily) classical music. I am a huge fan of Beethoven, Bach, Vivaldi, Paganini, and countless other composers. I love the way that they make all of these different musical forces converge to make a unified musical statement. Though I was inspired to study classical music because of my shred guitar idols like Steve Vai, John Petrucci, and Yngwie Malmsteen, it led me down a path of appreciating composition and orchestration in a way I didn’t originally foresee. Shredding guitar solos are still important to me, though, and I will make a point of having more of them on future BACKMASK material.

In the years since Backmask’s formation you have released two recordings: a self produced EP in 2001 and then Tomorrow is Dead in 2005. What were these experiences like, how did they differ, and how do you feel about Tomorrow is Dead?
Shane: Well, there actually was a self produced full-length in 2000, an EP in 2002, and the current Tomorrow is Dead EP in 2005. The first CD was ambitious and ultimately a very haphazard effort, as I had no idea what I was doing with my recording equipment, and I had never written a full song until then. The 2002 EP was only 3 songs, including the first recording of the song Tomorrow is Dead, and we were very happy with it. My dad helped out with the mix and we handed out hundreds of promotional CDs at OzzFest that year. It was then that we saw a huge spike in our website hits, etc. The Tomorrow is Dead EP this year marks the first time we’ve worked with Kurt Howell producing, and we’re happy with it overall. Presently I’m writing songs for the first legitimate BACKMASK full-length (my 2000 demo doesn’t count, it’s too goofy!) I’m in the process of putting together a new lineup for the band as well; it’s been hard to find dedicated musicians!

You have had a lot of success with your music on the internet. For example, your song “Tomorrow is Dead” reached #1 on MP3.com’s metal chart and was also selected in 2003 as the ‘track of the day’ on garageband.com. What do you think about the importance of the internet in an artist’s life?
Shane: The Internet, and live shows, are everything for a band these days. Look at the explosion of MySpace.com. We have almost 1000 friends over there and people add us all the time for no apparent reason and are listening to our songs every day. I’ve been a web designer since 1994, and I have always known that the Internet was going to become the place for music. I’m very happy that we’ve had some success online, and I can’t wait to see what happens once we release a full-length and start touring for real!

How has “Tomorrow is Dead” been received thus far?
Shane: Everyone seems to be very excited about it so far, but my focus is on finishing the upcoming full-length at this point. The EP is really a promotional tool more than anything else.

You got your current practice spot from metal band DevilDriver. How did you come to get this hooked up?
Shane: The DevilDriver guys used to have a band called Grolby in our hometown of Santa Barbara, CA, with a different lead singer. They played lots of shows with us; I’ve been friends with them for years and they remain some of my closest friends. It makes me unspeakably happy to see the success they’ve gone on to. One of my goals is to get BACKMASK on a tour with them, hopefully this can happen fairly soon!

Backmask was recently featured in the November issue of Revolver magazine. How did you score this plug?
Shane: Any band can score the postage-stamp sized plug that we got. Just read the instructions in the back of the magazine. It’s very silly of us to boast this on our homepage, but it looks/sounds good to say we were in the magazine!

Just recently you headed back to the studio to begin production on your first full length disc and yet again you are working with producer Kurt Howell. How is this going so far and can you give us some details about the album?
Shane: It’s going great. The album is going to have a bit more epic moments to it, longer songs, more solos, more “metal” in general!

What does the near future hold for Backmask?
Shane: New album, new lineup, and more touring than we’ve ever done in the past!  [ END ]