Bridging the past and the present, alternative rock outfit Budderside returned in December (after a bit of a hiatus) with the release of their latest single, “Joker.” The group, who we got to know more about a couple of years ago in our interview with frontman Patrick Stone, is paying tribute to Stone’s late father, Charles E. Stone, with this new song. Stone lost his father in 2020 after living a genuinely remarkable life. The reason the song is titled “Joker” is because it was something of a nickname for Stone’s father, a Korean War veteran and former stunt pilot. To properly honour his dad, Stone and his bandmates filmed the song’s accompanying music video at the Planes of Fame Air Museum in Chino, California, surrounded by historic warplanes and aerobatic aircraft.

The Hollywood, California quintet is readying the release of their fourth studio album, which they have been working on with producer Matt Good (Asking Alexandria, Hollywood Undead). Three singles have been released thus far, including “Too Far,” the band’s first single to ever appear on the Billboard Mainstream Rock chart. The album will follow 2021’s Spiritual Violence, which helped establish them as a major player in modern rock. The album included guest appearances from Motörhead guitarist Phil Campbell and Butcher Babies singer Carla Harvey.

To discuss this special song and music video, we recently spoke with lead singer Patrick Stone about the concept behind “Joker,” the interaction between song and video, and his ideas on music videos in general.

Any concepts where you started and, midway through, thought, what the fuck are we doing?

Patrick Alan Stone: “(laughs) Every damn time. But, to be honest, that’s where it gets exciting. The band has filmed in Germany, surrounded by weapon-toting maniacs, Japan fighting two-story skeletons, Lake Tahoe mountainside, knee-deep in snow, Lancaster submerged in freezing water, the list goes on and on. Anything that could go wrong often does. But, the stronger the current below, the larger the wave to ride.

“‘Joker’ was one of our easiest going shoots to date. But getting a museum with probably over a billion dollars in historical aircraft to let a bunch of hard rock musicians crawl all over them wasn’t easy. The heart and soul of the song usually seem to get people on board. We’ve got something special, people bend over backwards, and the stars align to make the dream come true. I’m always in awe of what we pull off.

“I give credit to my father on this one. ‘Joker’ is a tribute to him and his love for flying. The moment I got the museum owner on the phone and started talking shop about dogfighting aircraft and the legend of my father, I knew there was no turning back. This, like all our videos, was going to be epic.”

“I absolutely love this question. While none of our videos have taken a back seat to budget, I imagine the impossible. By impossible, I mean everyone would want to know how we pulled it off. I’d probably get Tom Cruise and Rooney Mara to star in it, and I’d play the villain, like a terminator or something. Possibly start in Paris and end in space (laughs). A lot of stunts and amazing landscapes. I mean, if money was no issue, why not? How fun would it be to do that?”

“Either Emily Armstrong or Taylor Momsen, for me. A guest appearance would mean a collab, a collab would mean working, writing, and recording together. That, all of it, is a dream come true. What these women stand for and write about, what their music makes me feel and imagine, is something we strive to create ourselves. I would imagine incredible breakthroughs and self-discovery in the process and a wicked video to celebrate that. (Guitarist) Sam (Kolton) said he’d love Brent Smith or Jacoby of Papa Roach; that would be sick. (Guitarist) Logan (Nikolic) mentioned Jordan Fish of Bring Me the Horizon. Musically that would be incredible.”

“The song usually dictates the theme, for sure. It inspires the visuals, definitely, but doesn’t need to explain the song. Sometimes the instruments and music inspire the setting before the lyrics do. It’s also cool to deviate from the personal definition of the song to allow others their own interpretation and connection. ‘Zen’ went to the core of Japan to create its authenticity to the title while the song focuses, lyrically, on a lost and traumatized girl, whom I never felt would find her Zen.

“‘Ghostlighting’ is about the lockdown and the inability to escape yourself, but the title lent itself well to a haunted house, monsters, and a hilarious Scooby Doo gang parody. ‘Too Far’ nailed the subject of the song perfectly. Possibly my favourite video we’ve ever done; it really brought the meaning of the song to life.

“The next one, you’ll see, has nothing to do with the lyrics and everything to do with how the music makes you feel. Fast! I’m not a fan of just live performance videos. I want a journey.”

“Always wanted to immerse ourselves into a demonic circus. It was always in the back of my mind since the first time I played a minor chord. In love with Cirque Du Soleil and everything that surrounds it. Not that ‘Amber Alert’ was written for that, but damn did it fit nicely. Firebreathers, contortionists, aerialists, hoop artists, many of them I picked straight out of Cirque Du Soleil.

“The makeup artist for American Horror Story, body paint and showgirls, clowns, the devil, cupid, little people, the works! Just an epic setting for a video. Many have tried to copy us since then. Ours definitely gets you closer than anyone ever did; check it out. Our next release will be the wildest yet.”

“So far, it’s the best exposure we get. Our YouTube collection gets more views than all of our other platforms combined. People are really enthusiastic about us after they catch just one, then they dive into the rest. The comments say it all. It’s great to watch that grow.”

Can you elaborate on the concept behind the “Joker” video?

“My father was a stunt pilot and a veteran. We lost him to COVID at the end of 2020, and the band was there to help me through, as was the music. Surrounded by gorgeous aircraft felt right. My father laughing his ass off, upside down, piloting a fully modified two-seater inspired the title. He thought it was hilarious to see my brother and I face pure fear. I’ve had a few near-death experiences in my life, and I’ve managed to stay calm through them, probably because of those experiences.

“One time we were on a Pan Am flight out of California heading for Germany when an engine blew, explosion and all. As everyone panicked, I remember telling everyone, ‘calm down, there are three more engines; we’ll be fine.’ I was 6.”

In terms of the crew who worked on the video, who did it include, and how did you put together the team?

“Our crew is family. Eight videos, one after the next, since meeting Vicente Cordero and the Industrialism Films team. I can’t say he was just starting out when we began, but he’s come a long, long way since. He’s creating videos for so many of the top names in the industry. Well deserved. He comes through every time, full of passion and insight. The job just gets done. We work very well together. He and the entire company are a blessing.”

Your animated videos are really memorable. How do they come together? Who helps to animate the clips, and how are they done?

“There is an animated lyric video for most of our singles, as well as an official. I searched for a long time before finding Pablo Conde. I fell in love with his work, and we connected by email. ‘Pardon Me” was our first endeavour, and the story and visuals had to be mapped out together first. It turned out so well I’ve used him for all of them after.”

Does the band have a concept in mind with these videos, or is Pablo given full reign to come up with a suitable visual companion?

“Aside from a few notes, Pablo was left to his imagination going forward. I’m so hands-on with our practical videos I was very excited to see Pablo’s perspective come to life, without our supervision. I can trust him. He always makes a profound connection to the lyrics, and the cohesive style will be stunning as backdrops to live performances, as much as they are on screen, by themselves.” 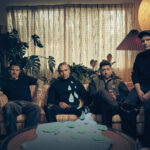 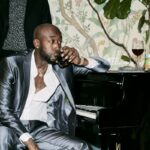