With their new album, The New Torment, Contracult feels they have reached their full potential since their formation in 2020. The record, released on November 4th through their own Hogwasche Music label, is their first since parting ways with their previous label Roadrunner Records. This album was made more on the own terms of the band members, without any obvious or implied pressure coming from higher-ups at a successful record label.

Frontman and founder Travis Bacon, aka Svart, feels that what differentiates The New Torment from previous releases is that the band had the freedom to write songs in new and different ways rather than feeling constrained by old-fashioned writing formulas. The rule book was thrown down the well, in favour of a more organic sound, with each song having its flavour and vibe.

Despite its impressive results, the writing process for The New Torment was anything but easy. Svart had been diagnosed with bipolar disorder during the writing and recording process, which affected his ability to contribute, as well as his bandmates. There were undoubtedly tough days and some discouraging times, but the band was able to harness this turbulence and produce some of their best work yet.

Part of Svart’s approach to keeping his life headed in the right direction is living and maintaining a healthy lifestyle. He joins us today for another edition of Pumping Metal, in which he discusses fitness, getting in exercise on the road, sustaining gym injuries, and more.

Was there ever a point in your life when you were out of shape?

Svart: “Most of my life, I was out of shape. I was in a dark place at the beginning of 2014 and decided to follow up on a resolution. I went on a diet, put myself through a sober month and started training hard. I started seeing and feeling results, and I never stopped.”

What did you learn about yourself when you started taking working out more seriously?

“I learned that everything felt healthier when I started getting my physical health in check. My head, my gut, my heart. It’s one of the greatest releases of serotonin imaginable.”

What do you think is the biggest thing holding others back from achieving their best results?

“Finding something they really love. You have to look forward to working out in order for it to work.”

Gym playlist: top three tracks for when you have to dig deep.

Gym playlist: top track that gets you ready to start your exercise.

What’s your proudest achievement when it comes to fitness, health, and exercise?

“I did an amateur Muay Thai fight a few years ago. Mostly as a send-off to my old gym in New York. It was a lot of hard work and training/making weight, but I never felt better once the last bell rang and I was hugging my opponent. We still keep in touch.”

How do you stay motivated?

“I just try to remember how I’m going to feel after. That euphoria is like laying in bed after a great fuck (see Pumping Iron).”

What’s the worst possible thing you can do to your body?

What’s the worst injury you’ve ever sustained? How did you work through that injury, and what did you learn from that experience?

“I’ve gotten several injuries from training Muay Thai. Broke my foot, my fingers, toes and most recently, got kicked in the leg, which caused it to swell about a size larger. I stepped up my defences and never thought twice about coming back to class. I just love fighting.”

If you could choose one person to be your gym buddy, alive or dead, who would it be?

What’s the best piece of advice you’ve ever received about fitness and/or health?

“Intervals is the best form of cardio, and lift lower weight with more reps.”

“Only demos and new mixes. I find I hear things when I’m training.”

“I pack a jump rope and a set of tension bands and fit in the time when I can. Sometimes at a hotel gym, sometimes on the floor during the headliner’s soundcheck. I’ve gotten pretty creative with it.”

Some people go vegetarian and vegan, while others slam steaks, whole poultry farms, and a kitchen sink in regimented six-meal sittings. Where does your diet sit?

“I’ve tried so many different diets and eating regimens. I’ve found that my body needs protein more than anything, so I guess I’m more on the slamming steaks edge.”

Morning, noon, evening, night… When do you like to exercise? Does it even matter?

“Whenever I can. I definitely prefer the mornings, but sometimes it just doesn’t match my schedule.”

“It only makes the performance better. I sing better, I have tons of energy, and I look hot.” 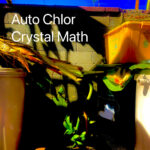