St-Petersburg-based Andrey Redkov (DJ, electronic musician and producer, mixing and mastering engineer) and Stas Redkov (sound designer, guitarist, and theatre director) are brothers and, together, also comprise the group Radial Gaze. Quickly rising through the ranks of Russia’s disco and dance scene, the group returns on December 16th with their new EP Tetra Seeds, out via the Berlin-based independent label Thisbe Recordings. The music, a mixture of slow techno, ethnic-infused electro, and percussive wonders, is well on display in the EP’s title track, the official video for which we’re premiering today!

The Christian Krueger-edited clip boasts a combination of both visual and conceptual footage illustrating the album’s overall concepts like futurism, outer space, and confusing dynamism. Long story short, it’ll suck you in and keep you pegged. Krueger is an experimental videographer and has previously worked with the label. The video was produced by label founder David Naville aka Pyrame.

“I am always astonished by what Christian Krüger is able to deliver in the music video space. In his short film, Christian provides his own thought-provoking interpretation in pictures of Radial Gaze’s ‘Tetra Seeds’ track by setting up a psychedelic stage for contextual snapshots of life. And this, at the pace of a high-speed train. In his video, he managed to create a symbiotic atmosphere with Radial Gaze’s music, characterized, for instance, by powerful beats, addictive melodies and an overall raw energy. Music and pictures bode so well when both are well done.” 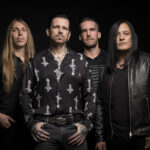