What began as just an experiment or a passion project has become much more than that. Metalcorers Protect Your Heart released their debut album [re]introduction on October 28th, a power-packed 13-track effort that’s full of good stuff. The songs are characterized by their energy and anthemic nature, featuring lots of passion, emotion, and highly satisfying breakdowns. The record reflects the passion and experiences of this young quartet and their zeroed-in focus on crafting something meaningful and memorable.

When Protect Your Heart first got started, it was just a little three-song project, a creative concept with which the members were just experimenting. They never intended to get to this point, releasing a well-conceived, well-thought-out full-length record. But then these loose concepts and rough demos began to come together, and the band members soon realized that this could be something much more. It has now become each member’s creative platform to which they are now entirely dedicated.

To get better acquainted with the band and their ‘[re]introduction,’ lead singer Matty McDonald has joined us today for a special track-by-track rundown of each song on the album, where they detail their inspirations, motivations, and favourite lyric from each track.

Matty McDonald: “I remember we recorded this song during the middle of the California fires, and I showed up to the recording session with the most hoarse voice from breathing the smoky air all week. At first, I thought we might have to hold off on recording for a few days until things cleared up, but then the guys were like, ‘Yo! we love the extra grit… it’s a vibe!’ And I’m happy we kept it!”

“This song almost didn’t make the record. It started off as a lost guitar riff buried in some random folder on Dropbox that I randomly found one day while driving to meet the guys for a writing session on (producer) Jake’s (Bratrude) birthday. Now, it’s by far my favourite song to play live and one of my favourite tracks on the album.”

“This is all we’ve got, don’t be afraid to make your magic”

“The first time I talked to Kean (Bartelman) (before meeting the guys and joining the band), we talked for two hours about our passion for music. Everything clicked. I remember thinking to myself, ‘everything about this band sounds great… I really hope I like their music.’ And then Kean sent me this song, and it immediately blew me away. At that moment, I knew we had found something special.”

“This song actually came from a vocal demo I wrote about three years before I joined the band. I always loved the vocals, but never knew how I wanted to release it and eventually, it got buried in my ‘unfinished songs” library. I remember showing it to the guys, and they were super stoked on it. We stripped the vocals from the old track, and the guys rewrote most of the song within a day or two and even added what we call a ‘Jake down’ at the end and took it to the next level.”

“Since the beginning, I have always wanted to be in a heavy pop punk band, and this was the first pop punk song I ever released. This song is mostly about relationships, but it also has a few lines that touch on my musical journey. What a ride it has been!”

Favourite Line: “So knock me down and drag me out / This won’t be my final round”

“This song also almost didn’t make the record. I remember planning to meet with Kean for a writing session, and when I arrived, he canceled. LA traffic sucks, so I sat in my car at Starbucks listening to demos. Then I came across this really cool riff that was buried a few folders deep, and everyone had forgotten about. I wrote the chorus in that parking lot, and now it’s one of my favorite songs to play live.”

Favourite Line: “These are my glory days / What’s the point of all this pain?”

“I originally wrote this song about my friend who had just been diagnosed with cancer. I remember thinking about what it would feel like to be in his position (and something I relate to in many ways)… wanting to let others in, to allow others to be close to you, but not knowing how to open up. The lyrics gravitated towards a relationship vibe, but many of the lyrics still hold true to my friend’s experience.”

Favourite Line: “Every time that I crash and burn / The dark days almost feel like they’re rehearsed”

“I’m a sucker for ballads and slow songs, so this was naturally one of the first I wrote for the album. This recording session was also the most vulnerable. We tracked the vocals to this song really late on a Friday night to make the session more lonely, raw, and emotional, and I think that really came through on the final performance.”

Favourite Line: “Some things I won’t understand / Til I’ve lost what I had”

“We wrote this record during COVID lockdown, and there were many days that felt so lonely. I was isolated from everything and everybody, and I fell into some bad habits… I drank more than I wanted to, I rarely got quality sleep, and I started to lose track of who I was and what I wanted from life. I needed to write a song about this process as a way of coping with it and pulling myself out. It worked, but it was a tough one to write.”

Favourite Line: “My mind and heart are miles apart / But you won’t see it written on my face”

“This was one of the first instrumentals I heard from the guys, but one of the last ones for me to write vocals to. I was so stoked on this song, it was everything I wanted a heavy pop-punk song to be, but I put such high expectations on myself that I kept putting it off. I wanted to make sure I did it justice. One rainy day, about nine months later, it finally clicked, and I figured out what I wanted to do. Well worth the wait, and one of my favourites.”

Favourite Line: “We’re better off by letting go / But we’re too young to die alone”

“‘Fireproof’ was actually an EDM collaboration between myself and HIGHSOCIETY (James Guttman) a few years back. During one of our writing sessions, we jokingly tossed the idea of turning it into a metal song. Little did I know that the guys would show up a few days later with a ridiculously good metal version, and we immediately knew we had something special and needed to release it as a PYH song.

Fun fact: James is actually responsible for introducing me to the band. If it wasn’t for this song, the guys and I may have never met!”

Favourite Line: “I’ll live like I’m not scared / This is the last time I care”

“Another song I wrote when I was in a deep rut during lockdown. When you’re lonely, you convince yourself that nobody cares and continue to dig yourself into a hole… even more so when you’re alone. Writing these songs helped pull me out of that rut, and why this album is so special to me.”

“I wrote this song about our band. I met the guys right before the COVID lockdown started, so writing this record has been an uphill battle, to say the least. But we always found a way, and made sure to make it fun. That was always most important to us. We’ve all had successes and failures in music, but what does it mean if you’re not having fun and enjoying the people you’re on the journey with? That became our motto, and why this is the perfect closer to the album.”

Favourite Line: “We will never be heroes / And that’s alright” 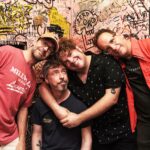 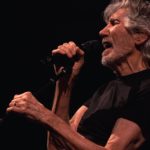