As they reach the midway point of their first American tour, Spanish punks PÓDIUM are taking a breather to level you with their brand new single “Una Coraza.” The song features the quintet firmly within their element, carving up rough and tumble punk rock for all of you hardcore devotees out there.

Production-wise, it’s actually probably a little cleaner than what the band has previously served up, but it still features plenty of the buzzsaw guitars, fluid basslines, and relentless drumming that you would typically associate with PÓDIUM as a unit. Lead singer Africa VaenBatta exudes a tenacious intensity within her impassioned vocal style, while her bandmates match her spunk and energy with their forceful instrumentation.

“Not much to say about this; in all honesty, ‘Una Coraza’ was recorded right before we departed for Canada at a professional studio in Valencia called Millenia Studios. From there, I mixed the song on my DAW using some shitty headphones; there’s the secret!”

Trampolino Perry originally founded PÓDIUM as a solo project that featured just him with a guitar and drum machine. It eventually morphed into a full-on, diverse quartet of musicians, defined by Mansaray’s spirit and vitality. It’s a combination of speed, skill, and coarseness that makes every track an event unto itself, pummeling you with mile-a-minute riffs that just don’t let up.

The band’s debut self-titled album was released in 2020 via Slovenly Recordings, which introduced listeners to their raw, stripped-down approach that combines punk rock aggression with early industrial. Their songs may mostly clock in at around two minutes, but they are two of the most impassioned, expressive minutes that you’ll experience as a fan of punk rock. 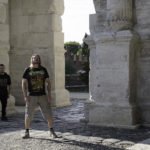