JoeyDiabolic is an artist that really has no limitations. And we don’t say that lightly either; this is a man who acts on his own behalf when it comes to his craft, relying on his own talents and devices to do the job right. The multi-instrumentalist released his latest EP mute last month, a collection of instrumental versions of select songs featured throughout the three years Through Soundwaves Series. The intention behind re-recording all of these songs and stripping them of vocals was to allow the tracks to stand on their own, emphasizing the genius of the instrumentation, and offering listeners a new and unique listening experience to songs they have already technically heard.

JoeyDiabolic has been performing under this moniker for about three years now, a project that permits him the creative freedom to combine his talents as a musician, composer, producer, engineer, and multimedia artist. He plays every instrument, produces each song all on his own, and is unintimidated by any challenge that comes his way.

As a musician’s musician, gear is of great importance to JoeyDiabolic, so we spoke to the uber-talented artist about all of his gear, how he uses it to create his sound, and how his current setup came about.

JoeyDiabolic: “Gotta be completely honest with you… everything I have is what allows me to create my ever-evolving signature sound, it involves every current and new plug-in, piece of gear, computer, etc. As a composer, producer and multi-instrumentalist, there are so many facets I have to take into account when it comes to compositions and production. The fact that I’m overseeing everything… I have to wear a lot of hats and I need all the individual specific pieces for each step of the process.”

How did you come to possess your favourite gear? Vintage shop, regular shop, borrowed money, gifted. Give us the details…

“I would say I’ve been really building and honing in this setup for the past few years. I usually reach out to my contacts at Alto Music for guitars, instruments, and accessories that are going to take a beating and need to last. I have a sponsorship with LaBella Strings, which has completely streamlined setups and being able to really dig into riffage and leads without fault. Otherwise, I generally buy software and plug-ins directly from the developers and as always, I exclusively use Apple computers. Feel free to check out my gear list on www.jeg3.com/gear (that’s my portfolio site where I offer multimedia services to all).”

What made you choose this setup and were there any close seconds or alternates?

“There are always alternatives and close seconds, but since I have to cover the cost for every aspect related to any of my projects and releases, I really have to go for the best quality and response for an affordable price. For instance, I bought a pair of Neumann NDH20 headphones that are insane as far as quality of build, articulation of sound, and mix reproduction. So, spending 500 dollars on a set of cans to that caliber that are also going to last me at least five years, if not more… That, to me, is a worthwhile investment.

“Same thing went with my studio monitors which are the Hercules Monitor 5’s and a Jano 10’ subwoofer. Definitely not name brands, one being studio speakers, the other being a residential entertainment subwoofer. However, they are super flat, articulate, and responsive.”

What about all of this gear makes it so important to you?

“Every piece I own is important since they have specific responsibilities and jobs to play in the principle production of whatever I’m working on. I have a Waves 30-Band Graphic Equalizer plug-in that is by far the most powerful plug-in I’ve ever owned. The range and manipulation of tone with massive headroom… it’s so underrated yet jaw-droppingly powerful.

“Upgrading to Amplitube 5 Max for all my guitar tones (and re-amping) has erased the need for any live amplification. I have every amp I will ever need, for guitar or bass. Additionally, I do own the Neural DSP Abasi plug-in which I picked up back in 2019.”

Did you use this gear during the recording of mute? If so, please elaborate on how and for what parts.

“The current rig features instruments, software, and plug-ins dating back to 2017. The monitor rig was purchased in early 2022 once I slowly set up out here in Los Angeles (drove cross-country and moved out from Newburgh, New York at the end of October 2021). The newest piece of the arsenal is my spec’d out Mac Studio, which was shipped to me June 2022.

“Creatively, I need to overload myself, so some of the upgrades (Superior Drummer 3 and Amplitude 5 Max) won’t begin to appear on releases until the se7en EP which drops on July 7th and will be further integrated on the Just Drive (2022) and Stimuli (2023) multimedia ‘film’ soundtracks as wells as throughout the four-part EP series At The Core of Darkness (2023-2024).”

“I haven’t performed live since February 2019 (as martyr art). For a short period of time in spring/summer of 2019, I was going to take a step back from being a frontman and play bass in Mama Doom. Ultimately, we rebooted our respective projects and what Mama Doom is doing now is better than anything I could have brought to the table in the previous incarnation. Their new album Blood Salt Sacrifice sounds fucking amazing and I can’t wait for everyone to hear it… it drops sometime in 2023.

“As for joeydiabolic live, that does pique my interest… still deciding how to go about that. Would like to have a small band and some backup singers, go for a scaled-down version of a White Zombie stage setup or just go completely digital and get video backdrops… it really comes down to what the budget will be and if it’s even sustainable.”

We know you love this gear, but are there any major cons? (Ok, now you can also list the pros.)

“There aren’t necessarily cons to the gear I use, but there are certain attributes, quirks, and behavioural elements that sometimes can be extremely trying. For instance ProTools… I probably already said enough (laughs).”

If you could, or wanted to (maybe you don’t at all, and that’s cool), what would you tweak or mod on this gear?

“I’ve had many deep thoughts about this, and it’s something that I plan to do… just not a priority at the moment. I’d like to install Floyd Rose 8-string tremolos on my two Ibanez RG8s, ‘Astro Creep 2K’ and ‘Nancy Loves Freddy,’ but not in the typical sense that everyone else would.

“What I plan to do is only mount the top pieces with the locking fine tuners to the top of the body (I’d sell off the blocks and springs underneath) and also install the locking nut at the headstock. I wouldn’t be using the tremolo for anything except increased tuning capabilities.”

How easy is it for you to tweak your gear and get the tone/sounds you need?

“Usually, it’s actually pretty quick for me. I grab an initial sound to track and feel out the vibe. Then I’ll go back and really dial-in tones until the entire composition makes sense to me.”

How does the gear hold up with regular touring and gigging?

“I’ve had my Ibanez RG8s since 2018. As Martyr Art, I used to drop my guitars on the ground and rip the strings off at the end of my sets while concluding ‘Friday the 13th (Nintendo Theme),’ which was kind of like murdering my guitar (laughs). It was kind of an ode to pop-culture horror that I dig… plus it’s entertaining as hell for the audience.”

“Got one for you… Back in 2014, I was performing a set at the Newburgh Free Library which was like a pre-launch to the Newburgh Illuminated event happening the next two days. As my live band was playing the set, it’s was just not going well at all… like, ‘get me the fuck out of here’ bad (and it’s my band). One of the musicians didn’t learn any of his parts and literally improved drums and percussion the entire 45-minute set… which was laughable and embarrassing, especially since it was obvious to everyone in the audience, other bands, the crew, and organizers of the event.

“At that time, I was using Schecter guitars and I’d have four or five with me for a show (for alternate tunings and backups of each). All of a sudden, during a song, the input jack on one guitar just shits out. So in the middle of that song, I took off the guitar, threw it on the ground and then stopped the fuck out of it with my Doc Martin’s. Broke the neck, destroyed the pickups, and then I was like, ‘Oh wait, you guys want to hear our last song?’” 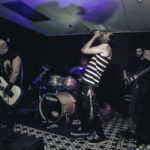 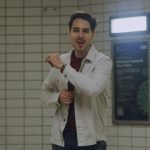