Contemporary UK rock quintet Ghost Arcadia has just released its scorching new video and single “Never Break.” Having spent the last two years, honing their genre-bending sound, to create something that sits comfortably alongside bands like Biffy Clyro, Linkin Park, Bring Me The Horizon and Enter Shikari, the band is set to pack the rest of 2022 with as many live shows as possible.

With multiple singles and an EP, Libero, now under their belts, we sat down with the band to determine which albums were “game-changers” for the quintet and if they had a guilty pleasure.

Reuben Beau Davies (Vocals): “An absolute game-changer of an album. It really showed that heavy music could have a spot in the Top 10 and it not feel out of place. For me, every part is perfect – the production and composition especially so. We actually worked with Al Groves on our new single which was an absolute dream for us.”

Adam Ford (Guitar): “3rd albums are tricky but this is the album that holds its own against Hybrid Theory. Chester’s vocals scream vulnerability, Shinoda’s verses ooze with flow; the production is both raw and polished. A handbook for rock guitaring in the modern age and masterclass in taste. The soundtrack to a victory lap.”

Ant Hollis (Guitar/Synths): “The album transcended what I previously believed were the confines of ‘genre,’ proving a song can be as varied, fluid and dynamic as the human imagination. Especially with the huge velocity it opens with…and then it just flips again! This album was an eye-opener for me and my musical exploration.”

Favourite Track: “The Appeal and Mindsweep I”

Pedro Jonatas (Bass): “RATM was my first concert as a teenager. Seeing them perform changed everything for me. It was the moment that I decided to play in a rock band. From the second they took the stage there was no time to rest… I loved that energy. A year later I started bass and my journey began!”

Ali McCreadie (Drums): “One of the first albums I remember having on repeat as a kid. The fact it was their debut album made it even more impressive to me. All the tracks lead into each other so well, while also being strong on their own. Saw it played in its entirety at Download Festival and it was awesome!”

Reuben Beau Davies: “I would argue not a guilty pleasure…I love Robbie Williams! Robbie and swing music? 10/10 would absolutely recommend it! It’s probably the best mainstream modern-day swing album out there. His vocals are insanely good, and he proved he wasn’t just a one-trick pony with this one.” 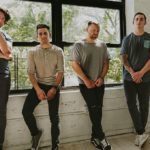