This is one pile of junk that you won’t find in the trash. Kitty Junk, the innovators of what they have coined “junk-punk” or “junk-rock,” are set to release their debut full-length album Converse Theory on October 28th. Rather than wait until next week, you can hear it in its entirety right now, all eleven cuts of what can be viewed as the most definitive work of the junk-rock sub-genre.

Recorded at Earwig Studio in the rock capital of the world, Seattle, Washington, the album’s sound certainly bears the influence of the duo’s hometown, an alliance of grunge and glam rock with modern hard rock. The anticipation for the release of the album has been growing since the release of their eponymous single and music video back in January. They followed that up with the release of “Head Rush” in May, and then the rebellious, alienated punk anthem “So Pretty” earlier this month.

“Junk is the catch-all for the style of music we play that incorporates various influences from L7, to the Lunachicks, to Nirvana, to Green Day, to Tool. Our album runs the gamut from punk to metal to party rock to political and encapsulates the year we spent together in quarantine during 2020, both working hard on our music, learning audio engineering and just being silly and having fun, providing comic relief as much as we could. We often say to each other, jokingly, ‘What is Kitty Junk even?’ We’re everything.”

What began as a side project for Dane and guitarist Ryan Lee is now their primary focus. Dane and Lee are two-thirds of hard rockers Atrocity Girl, with the intention that Kitty Junk would be a creative outlet for them during the times Atrocity Girl is on hiatus. After a succession of sexist encounters that the two experienced within the music industry, they decided it was time to make a statement and create more gender parity within heavy music. To help accomplish this goal, Dane and Lee have formed their own non-profit organization called Womxn and Audio which provides education, workshops, interviews, and other resources for female recording engineers. Only roughly five percent of engineers are women and Kitty Junk are determined to make a difference. Provocative and defiant to the end, it doesn’t get much more hardcore than these impressive young women. 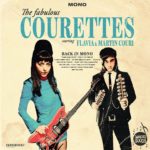 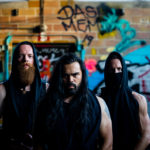