Calm, soothing and certainly psychedelic, Oats is here to take you on an audio-visual trip with his latest music video for “Green People.” The single is off of his upcoming EP of the same name, an acoustic, psyched-out folk song, featuring whispery vocals and a wide array of unconventional samples, such as the sound of sea creatures swimming in the background. The video matches the trippy quality of the track, with both working in unison to offer you a far-out, incomparable experience.

Oats wrote “Green People” during a time when he was dealing with some poor health, such as feelings of claustrophobia and isolation. His aim with the song was to make the main part resemble a gentle escape away from some frantic energy before said energy comes back for the concluding part. If it’s your first brush with Oats, it’s an ideal introduction within the space which this dynamic songwriter operates.

Commenting on his song, Oats shares, “The video is essentially a mix of a recently filmed live performance of myself, and some old family home videos. I got the idea of blending the two different formats since one of them is filmed digitally and the other is completely analog.

“I recently came across a bunch of old VHS footage of myself and my family during the mid-1990s. You get such a crazy rush of nostalgia when watching VHS clips, it shoots you right back. Whilst watching it, I felt the aesthetic of the analog tape footage would suit the vibe of ‘Green People’. The tune has a very melancholy feel to it, which goes nicely with emotions you experience whilst watching old family videos. I got my friend to blend the VHS footage with some clips of me performing on stage, and of course, smothered it all with more vintage effects!

“There is one part where it’s me and my family at a theme park in Surrey called Thorpe Park. I was completely terrified by this indoor horror-themed dark ride called ‘Witches Haunt,’ you can see the outside of the attraction in the video towards the end. It sadly burnt down in a fire years after and had to be knocked down. I actually managed to get hold of some of the crazy sound effects that played during the ride. I thought it would be rude of me not to use them in a song. You can hear them in the background on my older track ‘Tealdrop.’”

Oats grew up in London, England, a curious and music-obsessed young man who became enthralled with psychedelic music after he was exposed to it in his early years. That, along with the chilling soundtracks of horror films, really drove him towards being very musically experimental, recording sounds onto old analogue recording equipment with his older siblings. His first release was 2018’s Candle Fingers, a dreamy introduction to his psychedelic tendencies, before following it up in 2019 with the Good Thyme EP. Glow Box, a four-track EP followed in 2020, is a very ’70s sounding record with crunchy guitars, classic rock drumbeats, and as many sound effects as you can handle.

With such an exploratory approach to his music, there’s no telling where Oats will veer next. 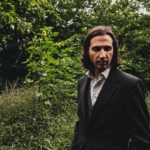