Alternative/indie-folk singer-songwriter Julien Baker has been out on her first pandemic-era tour this fall in support of her latest release Little Oblivions. We caught up with her as she played to a fully masked audience at a packed House of Blues in Boston, MA on September 17, 2021, along with supporting acts Mini Trees and Thao (of Thao & the Get Down Stay Down).

The night started out with Mini Trees, the indie-pop solo project of songwriter Lexi Vega. Vega, who in the past has performed with other musicians backing her up, was on this night accompanied only by a drum machine. Her debut full-length under the moniker Mini Trees, Always In Motion, was actually released the day of the show—so it was cool to see how receptive the audience was to her music. Vega put on a great opening set, bashful at times as she joked about feeling nervous with the audience. Her debut is available via Run For Cover Records. 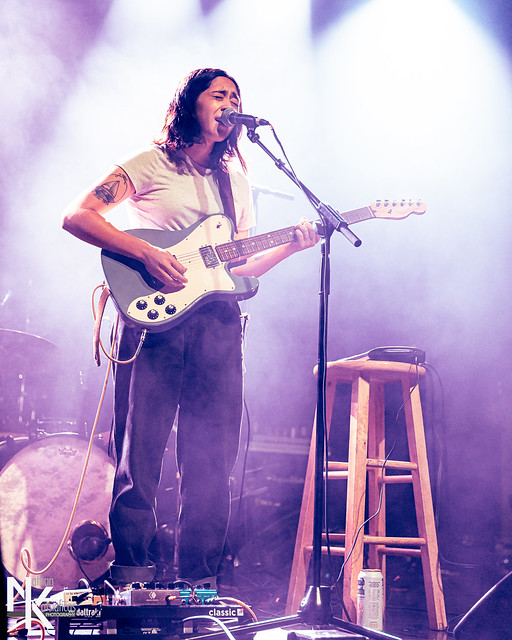 Up next, Thao took the energy up several notches with an off-the-rails opening track to the set that saw vocalist Thao Nguyen whipping her hair around while deftly wielding a mandolin. Her raucous set consisted of material from her band Thao & The Get Down Stay Down, including the track “Marrow,” off the 2020 release Temple. Five songs into the set, Thao had Vega as well as Julien Baker and her entire band out to join her for what she said was the first time this tour to help sing on the song “Fool Forever” from her 2016 album A Man Alive. Naturally, the crowd went wild seeing Baker on stage–it was a really fun moment that even saw Baker’s drummer hop behind his kit on a riser above Thao’s drummer and join in for the second half of the song.

At last, it was time for Julien Baker and her cohorts to perform! After a bit of a delay, they emerged and launched right into a massive 20-song set with “Hardline,” and “Bloodshot,” from her latest release. Julien Baker is one of those performers who is great on recording but absolutely otherworldly live. Her voice sounded incredible–so much so at times that it seemed like the audience had been stunned into silence. With this being her first big tour on the new material, her set contained a ton of new tracks–but it was clear from the volume of the crowd’s voices singing along that they were more than fine with that! The camaraderie on this tour continued as Baker had Vega come out to do backing vocals during “Favor”–she absolutely killed it!

At one point her backing band left the stage, leaving Baker to perform solo on keys for several songs including “Televangelist” and the sombre number “Song in E.” Their absence made their return for hit single “Faith Healer” that much more momentous and massive-sounding and again exemplified how incredible her vocal range is and how immaculate she sounds live.

The night would go on to include other notable hits like “Tokyo,” “Sour Breath,” and finally encore tracks “Everybody Does” and “Appointments.” With her raw talent for songwriting and incredible vocal chops, it’s only a matter of time before Baker is playing much larger venues. Do yourself a favour and catch her this fall, her remaining tour dates are listed below!