To say the least, it’s somewhat ironic that Down Again has been quite quickly moving up during a time when the music industry hasn’t exactly been on fire. But sometimes that’s just the way things go and you gotta roll with it, which is what Down Again has been doing since the June 2020 release of their debut album The Devil is a Gentleman.

Earlier this month, they followed up the release of that record with Bury The Bones, a new five-track EP that builds off of that momentum earned last year, and expands upon their 2020s post-hardcore sound. The new songs are defined by both their energy and precise songwriting, a sound inspired by the post-hardcore excellence of the 2000s, as defined by groups such as Underoath, Thrice, Defeater, and Brand New. Being a trio allows the band a certain level of musical freedom that would perhaps not be present with another member or two. And it’s all still a work in progress for these eager young men, looking to carve out their place for themselves among today’s post-hardcore purveyors.

To talk more about Bury The Bones, the single “Predisposed,” and its accompanying music video, we recently spoke with singer and guitarist Lenny Costa who helped bring us further into the world of Down Again

Congrats on the upcoming release of Bury the Bones, how are you guys feeling about it?

Lenny Costa: “Thank you so much! We couldn’t be more proud of this EP, it’s five songs that really show who we are as a band. We poured our all into these songs and I think people will be able to hear that.”

Releasing music like your single “Predisposed” is likely inspiring for other bands during times like these, what made you want to finish an EP and new music during 2021?

“We have been writing music like crazy, just non-stop coming up with ideas and writing new material. Deciding which songs were going to be on this EP was really the hard part, because we knew we wanted to put out a constant stream of new music. We wanted to put out an EP that felt like a full-length so finding the right songs to show our full range was our main priority.”

Off the heels of your 2020 album, The Devil is a Gentleman, what has evolved on this new EP and set of songs?

“For us, this EP feels like the final chapter of The Devil Is A Gentleman so all the songs tie in lyrically and thematically to our first album. We felt like we had more songs and more to say in that same vein. I think we evolved a little bit on the production end, so the songs sound more polished and professional, but it stays true to the sound we already established. What comes out next will mark the start of our next chapter.”

What does Down Again have planned for the EP over the coming months?

“We have filmed a few different music videos like the one for ‘Predisposed’ that we will use to push the EP, as well as new merch, video content, and getting on some podcasts. We are also looking forward to getting back on stage and playing these songs live for the first time.”

Post-hardcore has made a huge comeback over recent years. What are some of your favourite groups old and new that are making a buzz?

“We couldn’t be happier with the genre’s revival happening, some of our favourites being Underoath and The Plot In You who are both putting out amazing music right now. Some of our favourite up-and-comers are Static Dress, If I Die First, and AVOID, they are all incredible bands that people should be paying attention to.”

Who did you guys record Bury the Bones with? Any cool moments in the studio that you’d like to share?

“We recorded with Nick Loiacono at Fang Studios and we are so happy with everything he has done for us. We had a ton of fun while working with Nick, on top of him being a genius producer, we both like spicy foods. Sometimes we would go overboard with the hot sauces and our stomachs would get destroyed together so that was always a good laugh.”

The music video for “Predisposed” is incredible. Where did you shoot it and how did that all pan out?

“So stoked you liked the music video! We filmed it at an old abandoned hotel in the middle of the night, we had to hike a mile and a half with all our gear back and forth several times and it was absolutely brutal. Loading in and out took a few hours each way so we were really happy when we finally wrapped that shoot up. But it was totally worth it!”

“We can’t wait for everyone to hear Bury the Bones, it’s been all we could think about for months now and it feels good for other people to get to experience it finally.” 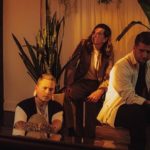