Within seconds of the opening strains of “Svält,” the introductory track off Åskog’s debut release, Varþnaþer, the band’s Swedish origins become clear. Immediate comparisons with Watain or Dissection are automatically drawn based on the venom with which this duo delivers their musical message. It’s only with time that Varþnaþer evolves into something far more, meeting the pre-release expectations set by their 2020 demo, Varg, which carried aspects of doom and traditional heavy metal on top of its black metal foundations.

This evolution grows, and it soon becomes apparent – especially through the varied vocal performances such as the spoken word sections on “Vinter” or the brassy roar on “Tid” – that Varþnaþer is a far more experimental affair. And what’s more, it doesn’t fall prey to the shotgun sampling of styles from which so many debut records suffer, maintaining a rock-solid core around which these creeping tendrils of alternative sounds emerge. In this way, Åskog draws more favourable parallels with another Swedish act – Marduk frontman Mortuus’ solo project, Funeral Mist – an act renowned for pushing boundaries.

The heavily atmospheric “Vinter” sets a high precedent early on.

There are a number of standout moments on Varþnaþer worth mentioning as a result of this mixed bag: and first among these would be “Korp,” the most obviously “heavy metal” offering on the record. The straightforward rock structures and the simplistic, yet still excellent lead work show an obvious affinity for the founding fathers of metal music. Clever arrangement is also clearly in evidence on “Måne,” though, which may not be the first single off the record, but exhibits the strongest and catchiest hook.

The production value on Varþnaþer is also worthy of NWOBHM classics: it’s simple and straightforward, with extra attention paid to the driving guitar tone, but not loaded down with studio trickery, or that terrifying antithesis of all that is black metal – an over-polished, clean result.

The album closer, “Aska,” may be replete with soundbyte clichés (cawing ravens and ominous thunderstorms…) but it’s still a powerhouse of a black metal song. It ends Varþnaþer on a high note, matching melodic work worthy of Dark Funeral (yet another proud Swedish comparison) with strong atmospheric sensibilities, all shrouded in thick, syrupy blackness.

The full album stream, courtesy of Åskog via the Black Metal Promotion channel. 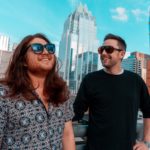 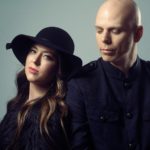